The word poet, which has been in use in English for more than 600 years, comes from the Greek word poiētēs, itself from poiein, meaning "to make." The word also shares an ancestor with the Sanskrit word cinoti, meaning "he gathers, heaps up."
~Merriam-Webster Dictionary 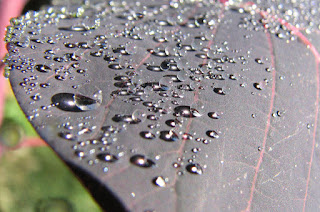 When the frost has melted
by Peter Shanks

Though Frosts come down
by Ryokan

Though frosts come down
night after night,
what does it matter?
they melt in the morning sun.
Though the snow falls
each passing year,
what does it matter?
with spring days it thaws.
Yet once let them settle
on a man’s head,
fall and pile up,
go on piling up –
then the new year
may come and go,
but never you’ll see them fade away

Poetry for Children has the Poetry Friday round-up. Thanks, Sylvia!

Thanks for the beautiful poem and photo. So glad I don't have any frost this morning... :-)

How fascinating. I didn't know that history of poetry/poet. I'm glad I do now. :)

I am quite fond of "make a poem" instead of "write a poem." And the poem is perfect for a project I am working on. (Not the first time you have given me a gift like this!) Thank you, dear Tab. xo

I do believe that nature teaches us more than one lesson, Tabatha. Your poem shows that learning beautifully. Thanks for the extra about 'making a poem', too.

I love the idea of being a maker....as well as gathering and heaping up. What lovely images. Both make me think of new poem ideas. And, to ask the question...what does it matter? Thank you for sharing these gems.

The idea of frosts gathering and coming down and melting each morning...wow. The photo is gorgeous.

I love the idea that poets are makers and gatherers. I've often thought all I have to do to catch a poem is listen to the world around me.

As I read PF posts, I feel that I am gathering the wisdom, inspiration, and strength I need to forge ahead with writing projects and life into 2019! Thank you for lovely, thoughtful post, Tabatha. Happy New Year!

Thank you for sharing this poem with us! I love the question it poses. It's important to think about.

I love the rewording from writing a poem, to making a poem. I can't believe the date on that poem, it seems so relevant and modern...really fantastic.

Ryokan's poem feels like it could have been written today, and there are layers of metaphor at the end unraveling… And "to make" poetry, yes! Thanks Tabatha!

This is a very Zen post, Tabatha. Thank you for bringing peace to my afternoon.

You've gathered a wealth of wisdom in this post with poems and photo and definitions. This Christmas I have gathered and heaped up lots of poetry to read and hopefully inspire me to make more.

Tabatha, I would like to add this art piece to my winter gallery compliments of you. The painting is so beautifully rendered.

Tabatha, the computer attributed anonymous to my comment and I am not sure why? Carol Varsalona

I must have read this poem six or seven times over the past few days. Thanks for sharing.