Disguised in sunglasses and a wig,
Notebook hidden under his beret.

“I’m sick and tired of fish and fowl.”
He told the waitress, Sue.

She said, “Our specials are spaghetti
And turtle eggs from Timbuktu.” 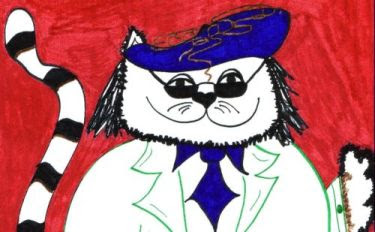 Here is a totally cool idea from Education World for making a class Poetry Calendar. Individuals could also make a poetry calendar -- it would be a terrific birthday or holiday gift for a writer/reader/teacher/poetry enthusiast!

Arrange students into pairs or small groups and assign each a month. Have students find the names of five poets who were born in his or her group's assigned month, and record on a piece of paper, each poet's birthday and the titles of 1-2 poems by that poet. (Students should read the poems as well.)

Ask students to share with their groups the information they find, eliminating duplicate poets. The goal is to end up with 8-12 unique birthdays per group. Then invite each student to read to the group his or her favorite poem.

After listening to the poems, each group should to decide which poet and what image to feature for the month. The image should represent the month (in terms of seasons, holidays, and so on) and the month's poets or their poems.

Posted by Tabatha at 5:56 AM No comments:

I have seen JMW Turner's works in person a couple of times and they knock my socks off. 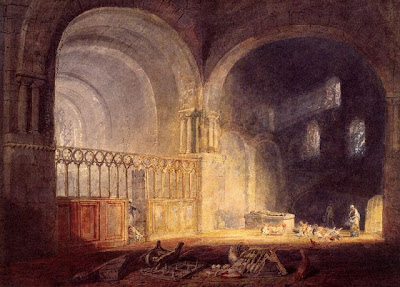 What he could do with light!

Turner lesson plans from the Tate in London

Posted by Tabatha at 5:31 AM No comments:

Poems can be fun to read together. Getting the rhythm right can be a challenge, but once you get it, it can sound good.

Here's a pretty easy one. (Have you had this conversation before? I have.)

How to hang up the telephone
by Delia Ephron

Teacher Gail Desler has some great ideas for kids studying what World War II was like for Japanese Americans on the West Coast. She suggests reading A Graduation Poem for Two by Stephanie Klose to get a feel for a poem from two different, but sometimes overlapping, view-points.

Then, students can pair up and read copies of Franklin Roosevelt's "A Date Which Will Live in Infamy" speech and An Interview with Marielle Tsukamoto.

In their own words and/or using words from the speech and interview, students use the poetry-for-two-voices format to create a poem on Japanese internment.

Any poet/student could use this idea -- contrasting two points of view in a poem for two voices -- with any historical or current event. Or a situation closer to home.

Here's a Youth Radio podcast of students performing poems for two voices (They also have a podcast of quidditch poems by students who were in a school quidditch tournament!)

Posted by Tabatha at 9:48 AM No comments:

Here we have a painting circa 1910 by Emma Florence Harrison.

Ms. Harrison illustrated many of Christina Rossetti's poems, so this work is presumably an illustration for Rossetti's Dream Land. 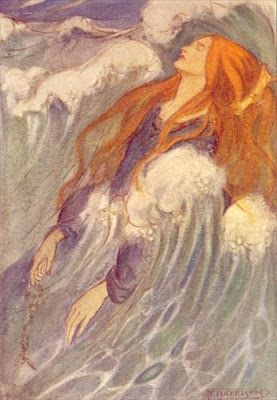 The opening to Dream Land by Christina Rossetti:

Where sunless rivers weep
Their waves into the deep,
She sleeps a charmed sleep:
Awake her not.

Posted by Tabatha at 5:40 AM No comments:

A World May Be No Bigger Than Two-pence 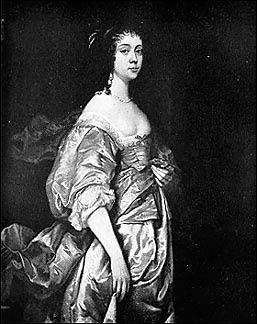 Of Many Worlds in This World
by Margaret Cavendish (1623-1673)
Just like as in a nest of boxes round,
Degrees of sizes in each box are found:
So, in this world, may many others be
Thinner and less, and less still by degree:
Although they are not subject to our sense,
A world may be no bigger than two-pence.
Nature is curious, and such works may shape,
Which our dull senses easily escape:
For creatures, small as atoms, may there be,
If every one a creature’s figure bear.
If atoms four, a world can make, then see
What several worlds might in an ear-ring be:
For, millions of those atoms may be in
The head of one small, little, single pin.
And if thus small, then ladies may well wear
A world of worlds, as pendents in each ear.

Poet Trivia:
Margaret Cavendish, a.k.a. the Duchess of Newcastle, wrote one of the earliest examples of science fiction (The Blazing World).
Posted by Tabatha at 7:46 AM No comments:

Sergey Tyukanov's work is our focus this week.

Project for Hotel and Restaurant
By Sergey Tyukanov 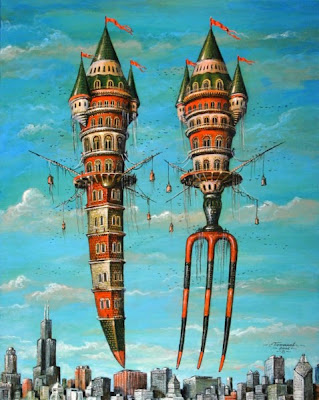 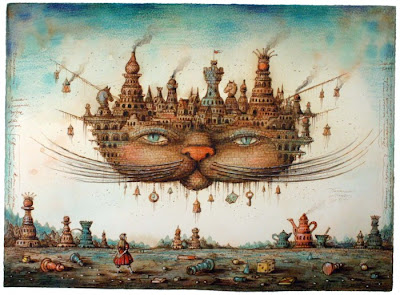 I might use this for Poem in Your Pocket Day (April 17th)...

Posted by Tabatha at 7:42 AM No comments: