OK, Mike Keith likes a poetic challenge. But as he says here, he also offers a challenge for the reader: "The poem below is a transformation of William Blake’s "The Tyger" via an unusual linguistic constraint. Your challenge is to determine the constraint, given the hint that strict application of the rule will invariably result (as it does here) in a composition containing exactly 109 words."

The first stanza of The Hydra
By Mike Keith

I admit, I did not figure out what he was doing. Don't continue reading if you want to figure it out on your own... 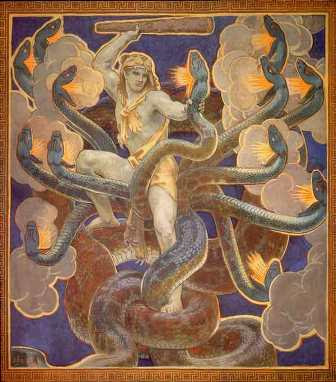 Solution:
"In The Hydra, the first letter of successive words is required to be the same as the first letter of the chemical symbols (in order) in the Periodic Table, thus producing a constrained language that might be called Elemental English."
H H N B B C N O F N S M A S P: Hydrogen, Helium, Lithium, Beryllium, Boron, Carbon, Nitrogen, Oxygen, Fluorine, Neon, Sodium, Magnesium, Aluminum, Silicon, Phosphorus, and so on...

Checking in on poetry in England:

Posted by Tabatha at 7:04 PM No comments:

The Afghanistan: Hidden Treasures from the National Museum, Kabul exhibit just arrived in D.C. at the National Gallery of Art. In its honor, here are two pieces from the exhibit. I don't have info about the top one, unfortunately, but isn't it gorgeous? 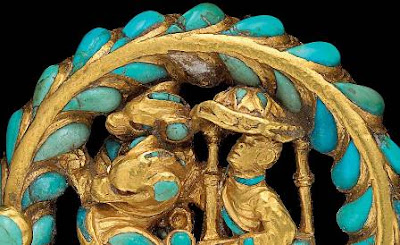 One of a pair of pendants showing the Dragon Master, Tillya Tepe, Tomb II
Second quarter of the 1st century AD
Made of gold, turquoise, garnet, lapis lazuli, carnelian and pearls 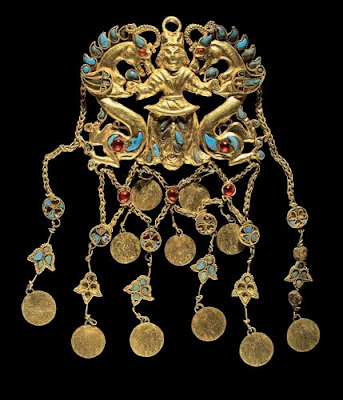 Photo © Thierry Ollivier/Musée Guimet
Posted by Tabatha at 8:20 AM No comments:

This has to be heard to be appreciated:

Mr. Alcott refers to it as a monologue rather than a poem. That brings up an interesting point -- how can you tell the difference when you're listening? Does it make a difference? The Internet Archive describes it as "spoken word."

Posted by Tabatha at 6:45 PM No comments:

Got up on a cool morning. Leaned out a window.
No cloud, no wind. Air that flowers held
for awhile. Some dove somewhere.
Been on probation most of my life. And
the rest of my life been condemned. So these moments
count for a lot--peace, you know.
Let the bucket of memory down into the well,
bring it up. Cool, cool minutes. No one
stirring, no plans. Just being there.
This is what the whole thing is about.

Elsa Mora, who goes by Elsita, produces art with a variety of materials... Elsita says, "If we take care of our inner landscape, if we water our plants often and pay attention to what's going on inside we will always be ready and strong for anything negative coming from the outside world."

Within Reach
By Elsita 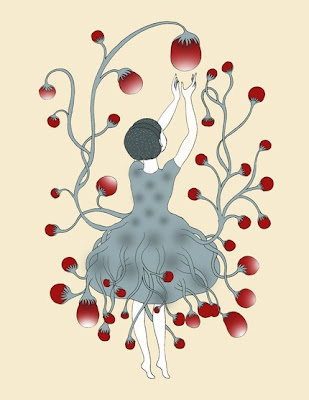 Posted by Tabatha at 6:02 AM No comments:

A hat tip to Mademoiselle Felicite for letting me know about Taylor Mali, and to Mr. Mali for giving me permission to post this:

In case you hadn't noticed,
it has somehow become uncool
to sound like you know what you're talking about?
Or believe strongly in what you're saying?
Invisible question marks and parenthetical (you know?)'s
have been attaching themselves to the ends of our sentences?
Even when those sentences aren't, like, questions? You know?

Declarative sentences - so-called
because they used to, like, DECLARE things to be true
as opposed to other things which were, like, not -
have been infected by a totally hip
and tragically cool interrogative tone? You know?
Like, don't think I'm uncool just because I've noticed this;
this is just like the word on the street, you know?
It's like what I've heard?
I have nothing personally invested in my own opinions, okay?
I'm just inviting you to join me in my uncertainty?

What has happened to our conviction?
Where are the limbs out on which we once walked?
Have they been, like, chopped down
with the rest of the rain forest?
Or do we have, like, nothing to say?
Has society become so, like, totally . . .
I mean absolutely . . . You know?
That we've just gotten to the point where it's just, like . . .
whatever!

And so actually our disarticulation . . . ness
is just a clever sort of . . . thing
to disguise the fact that we've become
the most aggressively inarticulate generation
to come along since . . .
you know, a long, long time ago!

I entreat you, I implore you, I exhort you,
I challenge you: To speak with conviction.
To say what you believe in a manner that bespeaks
the determination with which you believe it.
Because contrary to the wisdom of the bumper sticker,
it is not enough these days to simply QUESTION AUTHORITY.
You have to speak with it, too.

Posted by Tabatha at 6:42 PM No comments:

King Arthur, a segment from Heraldry and the Knights of the Round Table
By Norman Tellis 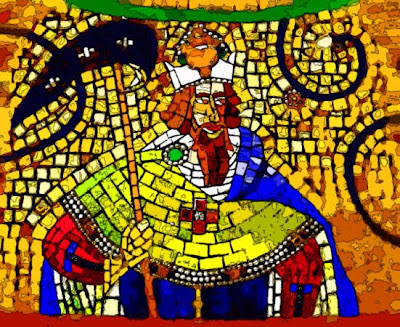 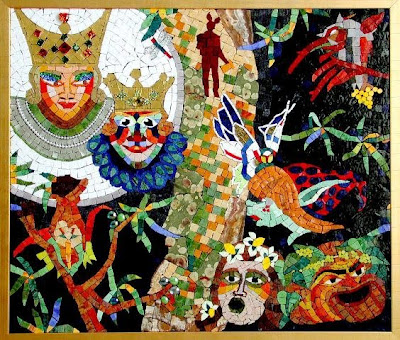 Posted by Tabatha at 6:14 AM No comments:

Creating visual accompaniment for poems is popular. Here are a few poetry videos:

Humpty Dumpty by Edgar Allan Poe (No, this wasn't really written by E.A. Poe. Someone re-wrote Humpty Dumpty in his style. Just see for yourself.)

Forgetfulness by Billy Collins. This is a popular poem for Poetry Out Loud participants to perform and always a crowd-pleaser.

Tuesday 9 a.m. by Denver Butson. I love this poem. This video was made by two 8th graders and won the Shanghai Student Film Festival.

Posted by Tabatha at 5:56 AM No comments: 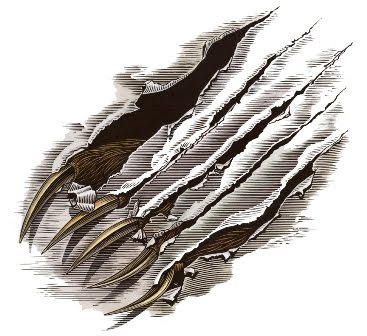 Posted by Tabatha at 5:51 AM No comments: