A cat has absolute emotional honesty: human beings, for one reason or another, may hide their feelings, but a cat does not.
~Ernest Hemingway

Sharing another old poem today. Thanks for humoring me while I raid the archives! Actually, this poem was never on my blog -- Margaret shared it at Reflections on the Teche because I wrote it for her (and her cat Mimi).

THIRTEEN WAYS OF LOOKING AT EMMA
by Tabatha Yeatts
with thanks to W.S.
for M.S. and E.

I
The tail moved
always —
before,
during,
and after.
There was never a time
the tail’s journey was over.

II
The cat’s nose
in the dog’s ear —
whispering love poems
with her whiskers.

III
Anything can be hidden
on the ceiling.
No one looks up.
Except the cat.

IV
The cat walks across the board game.
The whims of fate
cast furry shadows.

V
Only the spiral circles
of pacing and waiting
can express the longing
the scent of chicken
incites.

VI
The cat’s bones
ripple
like a pebble
dropped
in a water dish.

VII
Sleeping upright,
paws hidden,
tail delicately curving
around her side,
the memory of deity
remains.

VIII
The cat,
guardian, silent companion,
desires to be close to the rabbit,
as the tree guards the moss,
as the leaf guards the air,
as the earth guards the moon.

IX
A plane can take you far from the world,
but a cat can always bring you to it.

X
The cat discerns the approaching rain,
spins, and returns so adroitly
you might never imagine
that was not her original direction.

XI
Next to the cat,
the man sneezes.
The cat licks her side.

XII
One cat stalks a darting fly.
Her sister leaves her sleeping post
only to find another.

XIII
Shadows fall around the cat,
the icy gray fingers of age ruffle her fur;
the cat gets up
and moves.

Emma passed away in 2014, about a year after this poem was written.

Karen Edmisten has the Poetry Friday round-up today. Thanks, Karen!

Enter The Magic World of Books

Fill your paper with the breathings of your heart.
~William Wordsworth

Thank you, Malena, for allowing me to share your enchanting paper sculptures!

Enter The Magic World of Books
by Malena Valcárcel 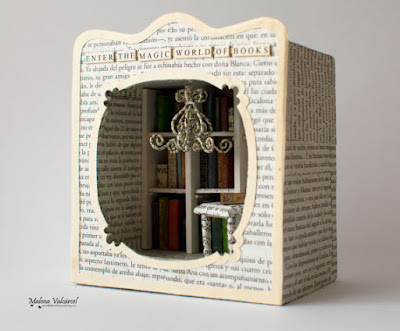 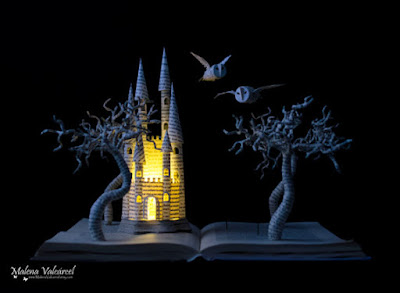 Into the Mystic, Book Sculpture
by Malena Valcárcel 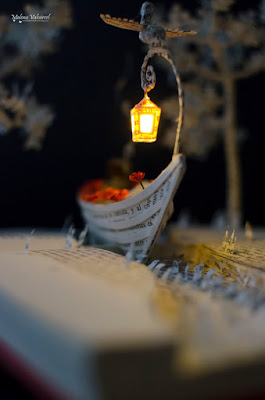 A Field of Poppies, Book Sculpture
by Malena Valcárcel 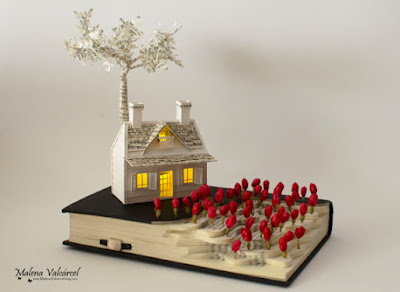 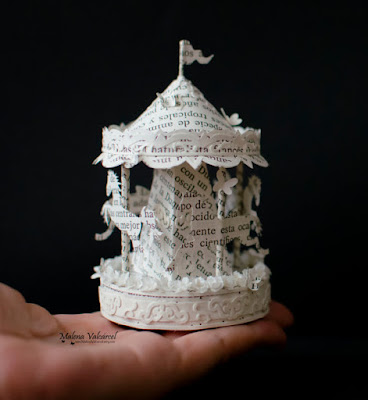 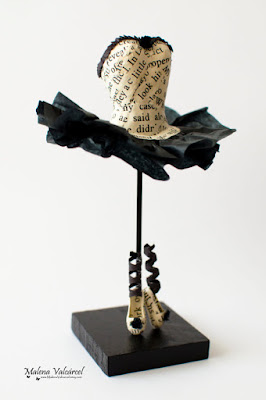 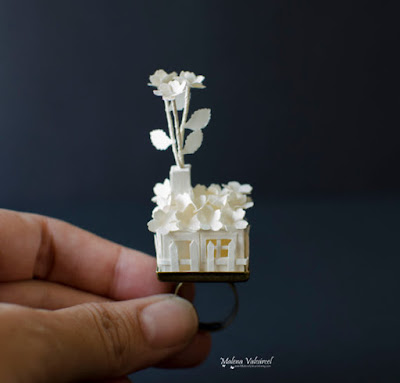 Won't you dance with me?

The world is full of magic things, patiently waiting for our senses to grow sharper.
― W.B. Yeats

Today's quote was inspired by the name of today's band: Oh Wonder. Hat tip to Bonnie Boo for introducing me to this group. The first video fills me with delight.

A song for Grace

Here's a song released by Andy Mineo as a tribute to his sister Grace during International Week of the Deaf, which ends today:

Nashville, man. That's the place to be.
~Willie Geist

Greetings, all! I left yesterday to go to Vanderbilt Family Weekend (yay!), so I am running an old poem of mine. 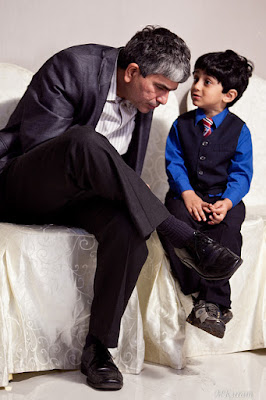 You can find the Poetry Friday round-up at Reading to the Core. Thanks, Catherine!

A rock pile ceases to be a rock pile the moment a single man contemplates it, bearing within him the image of a cathedral.
~Antoine de Saint-Exupéry

We're having a creativity party today! Come on in. There's plenty for everybody.

THE REINVENTION OF NORMAL from Liam Saint-Pierre on Vimeo.


A Viking Goodbye from Locke + Stache on Vimeo.


The Cinder Cone from Farm League on Vimeo.

Were you sad when The Civil Wars broke up? I'm happy to report that John Paul White has a new album! He's also touring!

Here's a song by Birdtalker that his old partner, Joy Williams, recommended:

A mash-up cover by talented young musician Ruth Anna Mendoza of the Philippines:

If you want to build a ship, don’t drum up the men to gather wood, divide the work, and give orders. Instead, teach them to yearn for the vast and endless sea.
―Antoine de Saint-Exupéry

I am happy listening to John O'Donohue any time -- what a marvelous voice he had! This poem-blessing seems appropriate as we Americans approach our election.

A BLESSING FOR ONE WHO HOLDS POWER
by John O’Donohue

May the gift of leadership awaken in you as a vocation,
Keep you mindful of the providence that calls you to serve.

As high over the mountains the eagle spreads its wings,
May your perspective be larger than the view from the foothills.

When the way is flat and dull in times of gray endurance,
May your imagination continue to evoke horizons.

When thirst burns in times of drought,
May you be blessed to find the wells.

May you have the wisdom to read time clearly
And know when the seed of change will flourish.

In your heart may there be a sanctuary
For the stillness where clarity is born.

May your work be infused with passion and creativity
And have the wisdom to balance compassion and challenge.

May your soul find the graciousness
To rise above the fester of small mediocrities.
May your power never become a shell
Wherein your heart would silently atrophy.
May you welcome your own vulnerability
As the ground where healing and truth join.

May integrity of soul be your first ideal.
The source that will guide and bless your work.

Today's Little Ditty has the Poetry Friday round-up. Thanks, Michelle!

God made some people Horn players; others are not so fortunate.
~Anton Horner

Somehow I've made it through all these Art Thursdays without ever posting French horns. Me, who writes poems about Mozart horn concertos and sings along with them too! But I am rectifying that omission today.

French Horn In F, a Delft blue and white earthenware French horn, probably made in Germany around 1850-80
photo by Peter Dutton 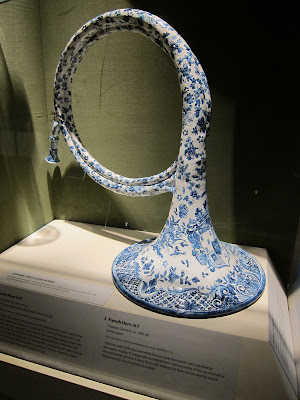 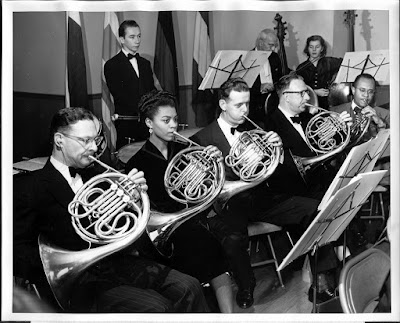 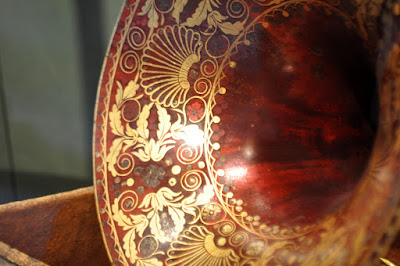 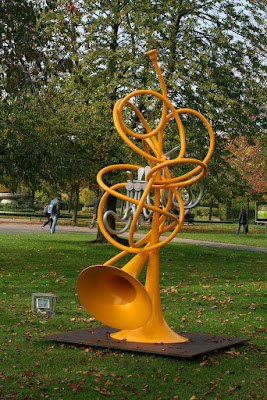 French Horn
Cousin Araminta is no longer welcome in France since the unfortunate incident with the poodle.
photo by Apionid 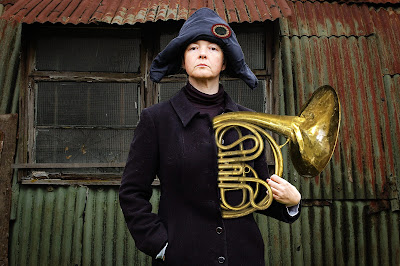 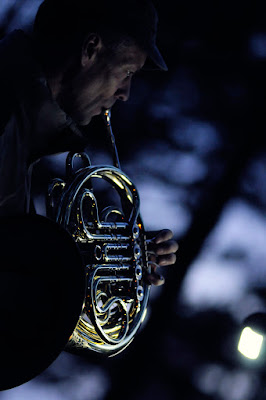 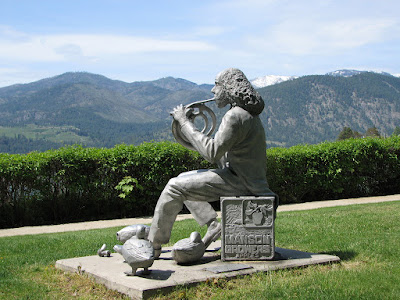 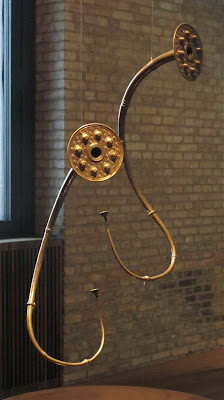 You've got to dig it to dig it, you dig?
~Thelonious Monk


For bagpipe swing by Ms. Carling (and some really whole-hearted enjoyment of her fellow musicians' work), visit here. 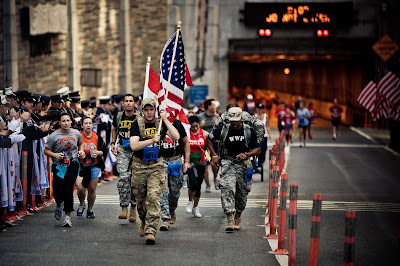 Wounded warriors and supporters run in the New York City Tunnel to Towers Run to raise awareness for their causes. United States Military Academy at West Point cadets and FDNY firefighters lined the final stretch of the run.

The run is in support of the Stephen Siller Tunnel to Towers Foundation, which works to build homes for injured troops and provide scholarships to the children of fallen service members and firefighters.

Siller was an off-duty New York City firefighter who headed back to the city to help after the attacks on 9/11. When he reached as far as car traffic would allow he strapped his 65-lbs of gear on ran through the Brooklyn Battery Tunnel to join his fellow firefighters. The 5km run retraces his steps to the base of the World Trade Center. Siller died while helping with the rescue effort. (Official Marine Corps photo by Sgt. Randall Clinton) 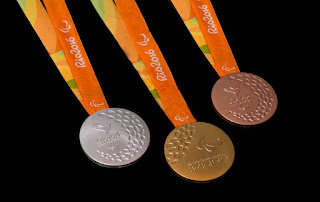 Am I excited about the Paralympic Games? I cried watching the Brazilian Paralympic team come into the stadium for the Opening Ceremonies. (That was the only part of the opening ceremonies that I saw...I probably would have cried for all of it.)

In the London 2012 Olympics and Paralympics, poetry was inscribed on a wall in the Athletes Village to inspire them. A Tennyson favorite was chosen:

That which we are, we are;
One equal temper of heroic hearts,
Made weak by time and fate, but strong in will
To strive, to seek, to find, and not to yield.

Another one that was suggested that I particularly liked was this bit by Longfellow:

The heights by great men reached and kept
Were not attained by sudden flight,
But they, while their companions slept,
Were toiling upward in the night.

Rules of the Republic of Paralympic
by Priscila Uppal

Everyone you encounter is immediately identified numerically
according to level of ability.

Roads are sectioned into individual lanes.

Paperwork is filed by relay.

After the canoes and kayaks have been lifted out
of the water, the painted lines on fields and courts erased,
the nets lowered, the bicycles sent for tune-ups, the scoreboards
reprogrammed, the trunks and singlets tossed in the wash,
sneakers unlaced, pools drained, gloves hung, mats soaked
in vinegar, the show jumps dismantled, ticket stubs
recycled, the starting blocks stored, hurdles stacked,
concession stands closed down.

He who loveth a book will never want a faithful friend, a wholesome counsellor, a cheerful companion, or an effectual comforter.
~Isaac Barrow

Sharing art by the marvelously-named Augustus Leopold Egg today. Just a few, but they are worth a long look! Egg, who died before his 47th birthday, was described by Charles Dickens as being "always sweet-tempered, humorous, conscientious, thoroughly good, and thoroughly beloved."

The Travelling Companions, 1862
by Augustus Egg 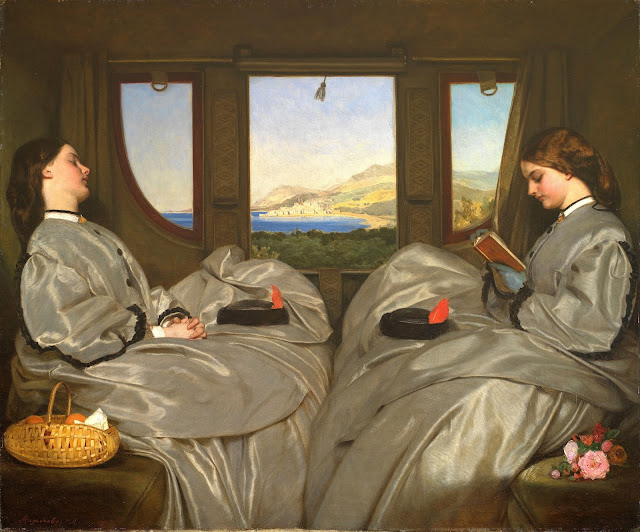 The Life of Buckingham
by Augustus Leopold Egg 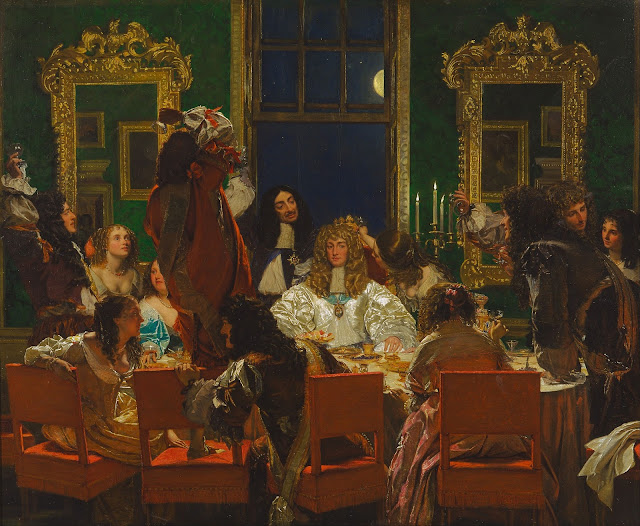 The Death of Buckingham
by Augustus Leopold Egg 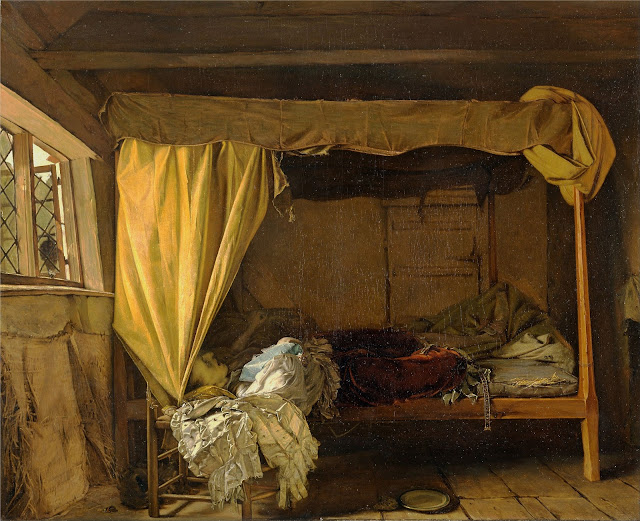 Any song I don't feel good about, I shelve. Anything you ever hear me sing, it's because I want to.
~Daryl Hall

Did you know that people jam at Daryl Hall's house? Of course they do, you're saying.

She dotes on poetry, sir. She adores it; I may say that her whole soul and mind are wound up, and entwined with it. She has produced some delightful pieces, herself, sir. You may have met with her 'Ode to an Expiring Frog,' sir.
― Charles Dickens, The Pickwick Papers *

Sharing a poem from the Poem Swap today. This summer was very emotion-packed for me, what with my father-in-law's death, son's graduation, husband's illness, and other events. When I was sending out a message to the swappers in July, I included this image and said, "This has pretty much been me this summer:

Drenched, but still holding on to my cup."

Dori thought about me and my storms when she wrote the following poem, which she sent with a delightful, musical frog: 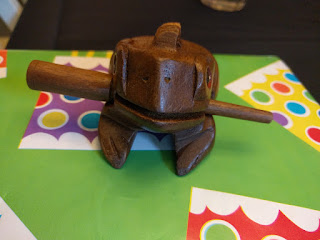 Song of the storm
by Doraine Bennett
for Tabatha

* In case you wondered about Charles Dickens' character's "Ode to an Expiring Frog":

‘Can I view thee panting, lying
On thy stomach, without sighing;
Can I unmoved see thee dying
On a log,
Expiring frog!’

‘Say, have fiends in shape of boys
With wild halloo, and brutal noise,
Hunted thee from marshy joys,
With a dog,
Expiring frog!

A Penny and her Jots has the Poetry Friday round-up this week. Thanks, Penny!

Animation is not the art of drawings that move but the art of movements that are drawn.
~Norman McLaren

Animated shorts today. They have some great visuals!