The heart, I think, which is the home of all things rhythmic, is where learned poems go to live.
~Bill Richardson

A couple of poems used in Poetry Out Loud, the national recitation contest for students, today.

The Farmer
by W. D. Ehrhart

Each day I go into the fields
to see what is growing
and what remains to be done.
It is always the same thing: nothing
is growing, everything needs to be done.
Plow, harrow, disc, water, pray
till my bones ache and hands rub
blood-raw with honest labor—
all that grows is the slow

The Legend
By Garrett Hongo

In Chicago, it is snowing softly
and a man has just done his wash for the week.
He steps into the twilight of early evening,
carrying a wrinkled shopping bag
full of neatly folded clothes,
and, for a moment, enjoys
the feel of warm laundry and crinkled paper,
flannellike against his gloveless hands.
There’s a Rembrandt glow on his face,
a triangle of orange in the hollow of his cheek

Just between you and me, sometimes I have been disappointed by Poetry Out Loud judging. I'm not surprised that it is hard to find consistency and skill among the many judges at the various levels. I ran across that problem during the dozen years I coordinated Reflections at the school level. (I still feel bad about a judge I lined up who turned out to be a stinker!) Regardless, I love that kids are learning poems by heart for Poetry Out Loud. Reciting poems is a gift.

Deowriter has the Poetry Friday round-up. Thanks, Jone!

The ruby encloses the brilliant red of the clouds of evening.
~Charles Blanc

Pietra dura is an inlay technique using cut and fitted colored stones (often marble, semi-precious, and even precious stones) to make pictures. It was invented in Italy in the 1500s -- "pietra dura" literally means "hard stones." 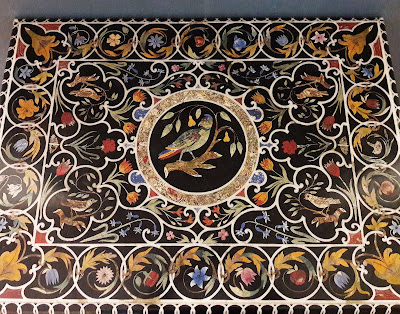 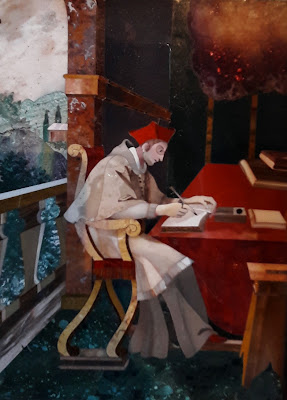 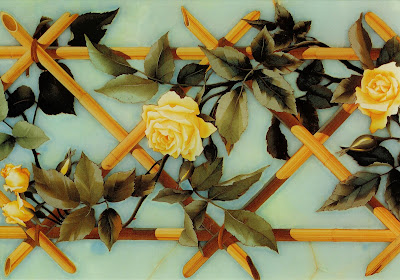 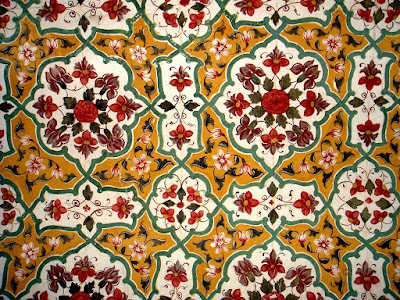 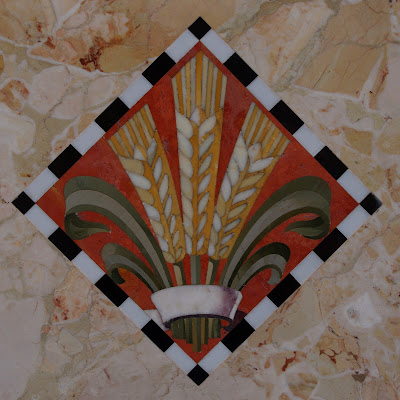 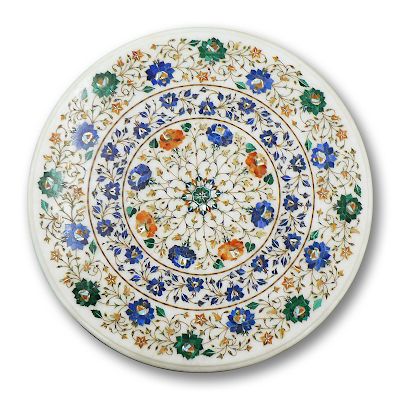 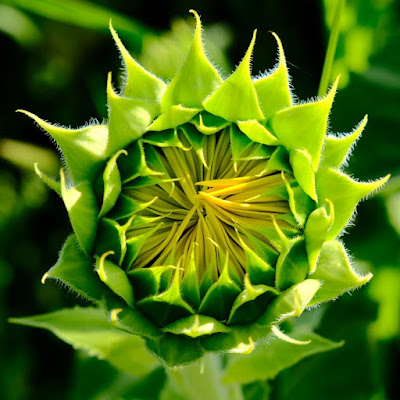 Were you a late bloomer? You're in good company. Still waiting to bloom? It's not too late! What are you interested in doing?

No one becomes a late bloomer doing something they hate.
~J.M. Orend

* Sylvester Stallone was 30 when he wrote and starred in Rocky.
* Danny Aiello did not start acting until he was 40.
* Anton Bruckner did not become a composer until his forties.
* Actor Alan Rickman got first real break into theatre in his forties.
* Singer K. T. Oslin released her first album at age 47 which was a major country music success.
* Eugène Ehrhart started publishing in mathematics in his forties, and finished his PhD thesis at the age of 60.
* BAFTA winning British actress Liz Smith did not become a professional actress until the age of 50.
* Richard Adams's first novel, the bestseller Watership Down, was published when he was in his fifties.
* Charles Bukowski wrote his first novel at age 51.
* Caspar Wessel published his only mathematics paper at the age of 54.
* Indian (Bengali) actor Paran Bandopadhyay started his acting career at the age of 60.
* Colonel Sanders began his franchise in his sixties.
* Laura Ingalls Wilder published her first novel in the Little House series of children's books in her sixties.
* Roger Apéry proved Apéry's theorem at the age of 63.
* The first volume of Flora Thompson's Lark Rise to Candleford trilogy was published when she was 63.
* Grandma Moses' painting career began in her seventies.
* Manoel de Oliveira became a full-time filmmaker at the age of 73.
* At the age of 74, Norman Maclean published his first and only novel, best-seller A River Runs Through It.
* Marjory Stoneman Douglas founded "Friends of the Everglades" at age 78, and she continued until she was over age 100.
* Bill Traylor who started drawing at age 83.
* Carmen Herrera sold her first artwork when she was 89 years old.

I try to decorate my imagination as much as I can.
~Franz Schubert

How did Grant Woolard combine 57 musical compositions into one pretty song? Amazing! (You can see a list of all 57 pieces and where to buy the sheet music here.)

Cope is helping me cope

It's funny: I always imagined when I was a kid that adults had some kind of inner toolbox full of shiny tools: the saw of discernment, the hammer of wisdom, the sandpaper of patience. But then when I grew up I found that life handed you these rusty bent old tools - friendships, prayer, conscience, honesty - and said 'do the best you can with these, they will have to do'. And mostly, against all odds, they do.
~Anne Lamott

Tabatha, you ask, when will you stop being angry at corrupt politicians? Verily, I say -- never! This week I was so spitting mad about Brett Kavanaugh that sometimes I woke up mad in the middle of the night. Dang it. Two poems:

Differences of Opinion
by Wendy Cope

He tells her that the earth is flat —
He knows the facts, and that is that.
In altercations fierce and long
She tries her best to prove him wrong.
But he has learned to argue well.
He calls her arguments unsound
And often asks her not to yell.
She cannot win. He stands his ground.

The planet goes on being round.

When I Rise Up
by Georgia Douglas Johnson 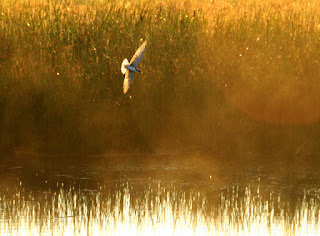 The Water's Edge has the Poetry Friday round-up today. Thanks, Erin!

I adore my life: it is filled with so much true poetry, fine feelings, things many have no idea about. I despise my life, which, being rich, allowed itself to be crammed into the confines of conventions. Between these two opinions pulsates my soul always longing for beauty and good.
~Marianne von Werefkin

Today's artist was born Marianna Wladimirowna Werewkina on September 10, 1860 in what is currently Lithuania. In 1892, Marianne met someone who wanted to be her protégé and she ended up putting her own work on hold for nearly ten years to help him. When she got back into it, she created these vibrant works: 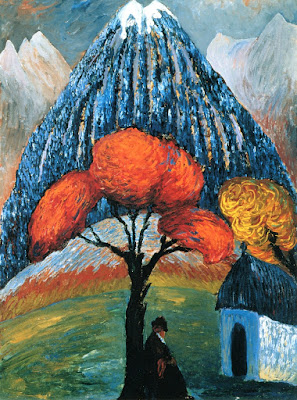 The Ragpicker
by Marianne von Werefkin 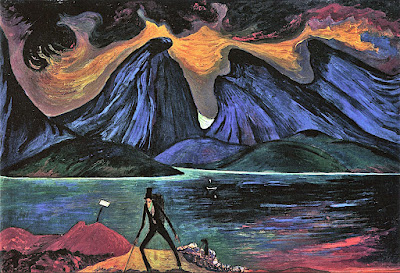 After the Storm
by Marianne von Werefkin 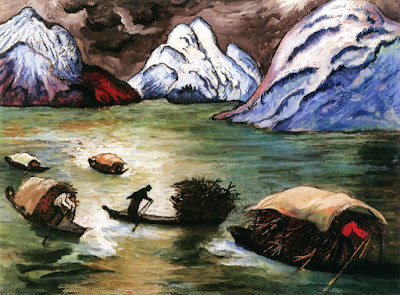 The Way of the Cross II
by Marianne von Werefkin 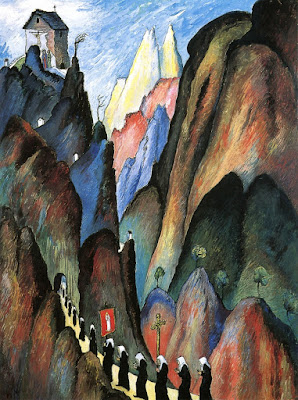 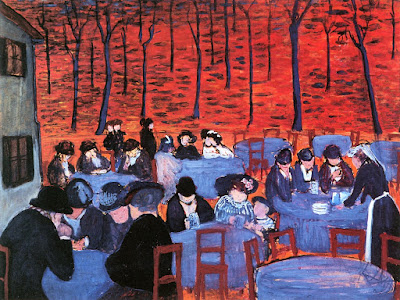 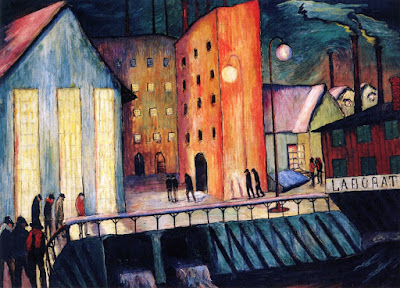 One last quote from Marianne, talking about looking at a painting in Berlin:

...Every day my soul sang in response to it stronger and stronger. I was very sick then, and that genius alone reconciled me to my life when there was so much suffering in it. Looking at his creation, at these lines, at these half-tones (remember that shadowed jaw against the background or the column against the dress), at all this charm of the art, at this grand style, I started to want to live again, to see it again and again, to live on by painting and perhaps by painting alone.

What a way to spend a life: looking for patterns of love and loneliness. Stepping in, every single day, and altering the trajectory of our world.
~Glennon Doyle 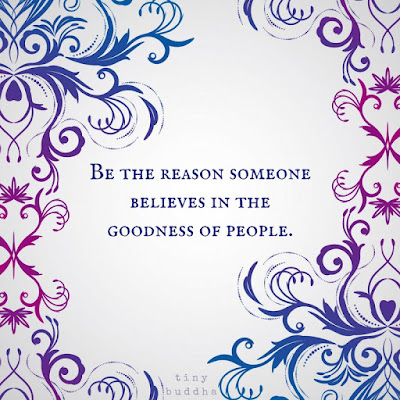 Could you use hearing a nice story? Here's one about a teacher who is devoted to helping her students, unobtrusively.

Education is simply the soul of a society as it passes from one generation to another.
~G.K. Chesterton
(Guess we should pay teachers appropriately, eh?)

The Unicorn Sonata ... tells us that our true home is often right around the corner, if we'd only open our eyes — and our ears — to find it.
~Peter S. Beagle

A lovely sonata from Ukrainian Cello for Music Monday:

Hey, Suit Lady. I kind of feel bad calling you "Suit Lady," you know? I think I should probably give you a name...What about Karen?
~Spider-Man

We have never met
yet our hearts know each other.
Poetry Friday. 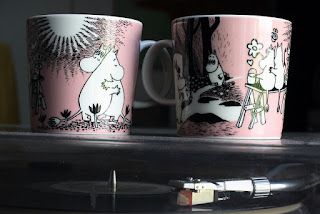 Friends, like good coffee,
revive me when the world has
worn me down again.

One last poem from another Karen:

My Aunt Sandra—a large woman,
a holy woman, maybe you can see her—

quilted housecoat, just-washed auburn hair
past her waist when she tips her head, heavy

to the side, and pulls wet strands over one shoulder,
both hands working to brush and smooth.

I received from my experience in Japan an incredible sense of respect for the art of creating, not just the creative product.
~Julie Taymor

Japanese stencils (Katagami) today, used for dyeing fabric. You can see how they do it here: 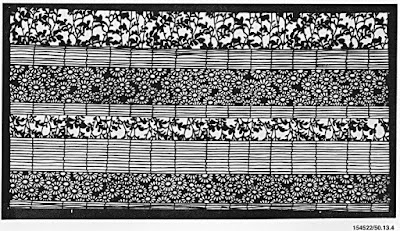 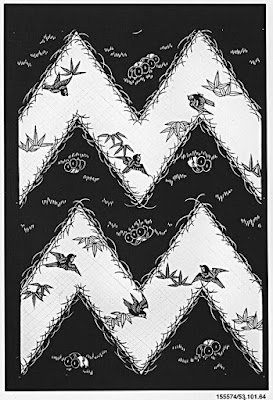 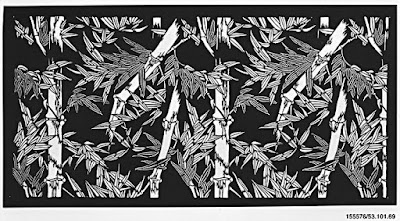 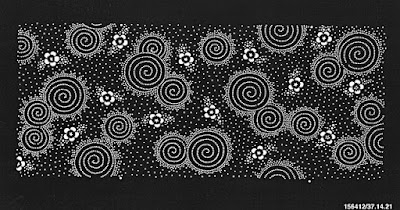 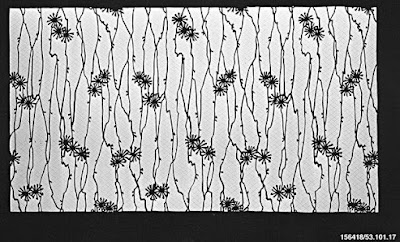 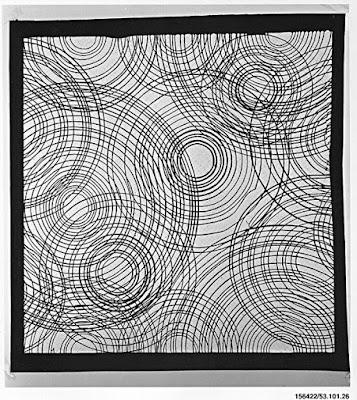 As much as I adore dogs, people are my favorite species. I know, what an aggravating, messed-up bunch. But still, my favorite, which is why this shirt from TourDeBookshop caught my eye: 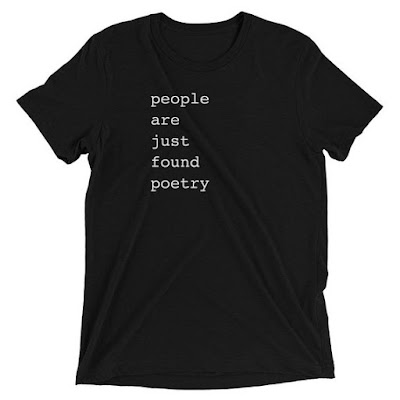 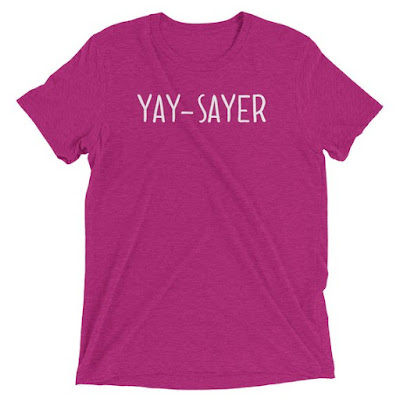 Some aphorisms by Yahia Lababidi from Where Epics Fail for Wellness Wednesday:

Don’t squander your boredom; dig deeper, treasures are buried there.

Silence is the great jeweler of words—certifying their authenticity and assessing their true worth.

The only real borders are those of our compassion.

You can’t bury pain and not expect it to grow roots.

As we make peace with ourselves, we become more tolerant of our faults—in others.

Think of existence as a great love story; every shy creature or timid truth wants to be courted.

Life is a time-release capsule, granting us only glimpses of ourselves at a time. 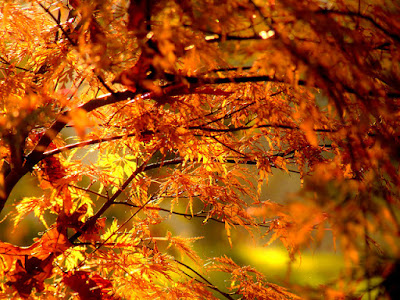 On September 11, 2001, we were living in a new state and I was home with our ten-day-old baby. My parents had left; my husband was back at work. I'm a pretty emotional person, and when I learned about the plane crashes, I realized that I had to find a way to hear about the overwhelming news and still be functional as a mom.

I'm reminded of that because today we look back on the horror of those losses and the bravery of the heroes, and we also feel the tug of our current responsibilities. We are in the middle of a constitutional crisis and we have to keep from being overwhelmed. We all need to VOTE. Our democracy needs us.

Can you come through?

Be an encourager. The world has plenty of critics already.
~Dave Willis

A song by Jeremy Zucker for Music Monday:

Glowing for a while

No one who cooks, cooks alone. Even at her most solitary, a cook in the kitchen is surrounded by generations of cooks past, the advice and menus of cooks present, the wisdom of cookbook writers.
~Laurie Colwin

Three poems today, all about "ordinary" things: food, laundry, a doctor's check-up. This first one is also kind of a "Where I'm From" poem:

It is good to have a slow
cooker in the house.
I know my mother best,

A couple of poems by Jim Richards:

What we owned was piled on the bed
and warmed the room with the smell
of bodies, bleach, and dryer sheets.
You, on one side, folded the colors
and I, on the other, the whites. Between us,
years, children, holes in the knees, stains.

When you check me, look deep.
I lost something in all that darkness.
When you examine my ears
fine tune the small bones for music.

Beyond Literacy Link has the Poetry Friday round-up. Thanks, Carol!

In her will, Hilma af Klint left all her abstract paintings to her nephew, vice-admiral in the Swedish Royal Navy. She specified that her work should be kept secret for at least 20 years after her death.
~from her Wikipedia page 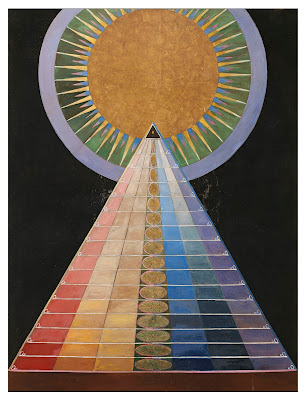 What a Human Being Is
by Hilma af Klint 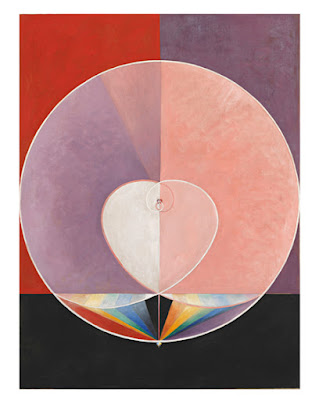 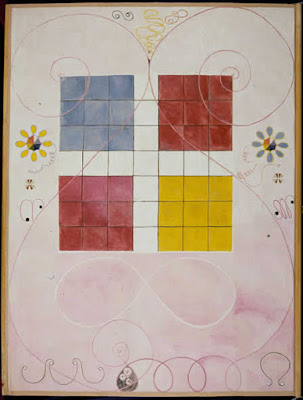 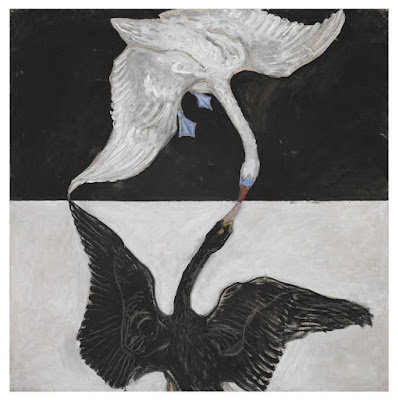 Self Portrait
by Hilma af Klint 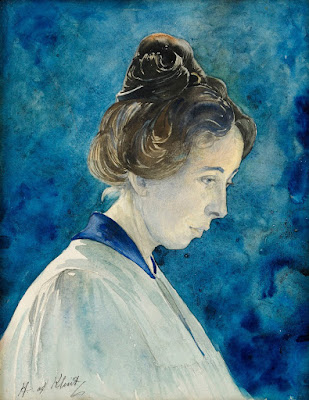 The best way to get started on the path to sharing your work is to think about what you want to learn, and make a commitment to learning in front of others.
~Austin Kleon

I got a kick out of this video by Leena Norms, (Hat tip to Austin Kleon) (Note: some cussing):

Most of the dandelions had changed from suns into moons.
~Vladimir Nabokov

Not a music video, but still, it does have music. I could have watched this for much longer. By Temponaut: