Deep in the sun-searched growths the dragonfly
Hangs like a blue thread loosened from the sky.
~Dante Gabriel Rossetti

Do you know the difference between dragonflies and damselflies? Sometimes they are both referred to as "dragonflies," so it can be confusing. Damselflies have very slender bodies and their wings are together (closed) when they are resting. Dragonflies' wings are outstretched at rest. The San Diego Zoo has a page about them. 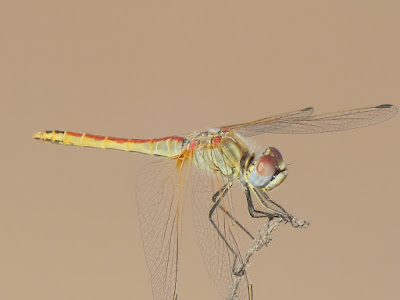 Skimming over my wife's flowers
by Joel Haas, sculptor 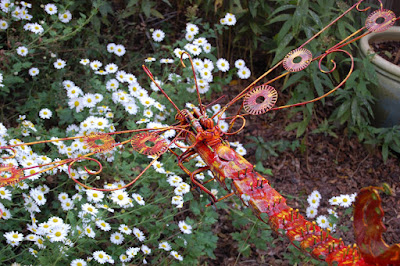 The Dragonfly
by Gustave Moreau 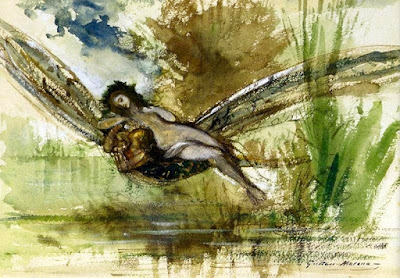 Dragonfly Insectothopter
Developed by CIA’s Office of Research and Development in the 1970s, this micro Unmanned Aerial Vehicle (UAV) was the first flight of an insect-sized aerial vehicle (Insectothopter). 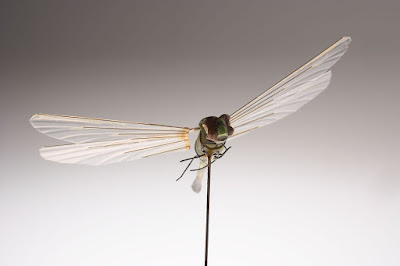 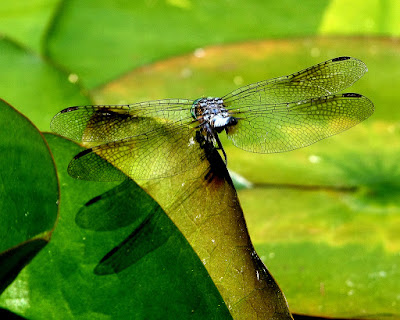 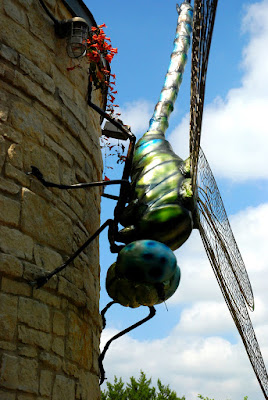 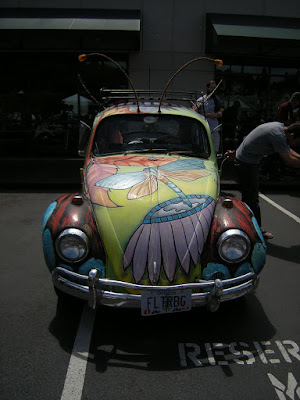 One more quote:
Clouds of insects danced and buzzed in the golden autumn light, and the air was full of the piping of the song-birds. Long glinting dragon-flies shot across the path, or hung tremulous with gauzy wings and gleaming bodies.
~Arthur Conan Doyle

I was sad when The Civil Wars broke up. They were so good together! But I guess only for us, not for them. Joy Williams, half of The Civil Wars, has some new music, which I am sharing today: 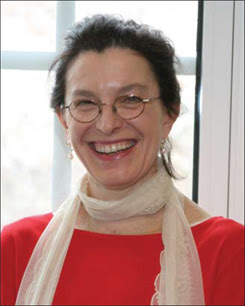 Claudia Emerson
The University of Mary Washington
(my alma mater)

Isn't that a great smile? I was prompted to share a poem by Pulitzer-prizewinner Claudia Emerson today by my older daughter, who was reading Late Wife and said, "Listen to her description of a turtle!" ("All is defense: the mud-covered shell, the ragged blade of the mouth, /the head thicker than your clenched fist.") I am sad to say that Ms. Emerson died last year at the age of 57.

the Depression, and he was alone in the boxcar,
the train stalled beneath a sky wider

than any he'd seen so far, the fields of grass
wider than the sky. He'd been curious

to see if things were as bad somewhere else
as they were at home. They were—and worse,

he said, places with no trees, no water.
He hadn't eaten all day, all week, his hunger

hard-fixed, doubled, gleaming as the rails. A lone
house broke the sharp horizon, the train dreaming

beneath him, so he climbed down, walked out,
the grass parting at his knees. The windows

were open, curtainless, and the screendoor,
unlatched, moved to open, too, when he knocked.

Mary Lee at A Year of Reading has the Poetry Friday round-up. We are on the road today, but I look forward to catching up with the round-up over the weekend.

It was a stark choice: shoes or food; beauty or sustenance; the sensible or the self-indulgent. "I'll take the shoes," she said firmly.
~Alexander McCall Smith

I found so many striking, fascinating shoes that I could do at least one more post, maybe more. So don't be surprised if I return to this subject again some day! (The shoes at the very bottom are the scariest shoes I've ever seen. What about you?) 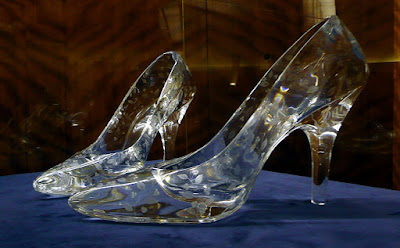 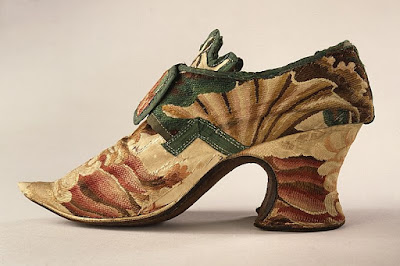 There was an Old Woman who lived in a shoe, circa 1875
illustration by Joseph Martin Kronheim 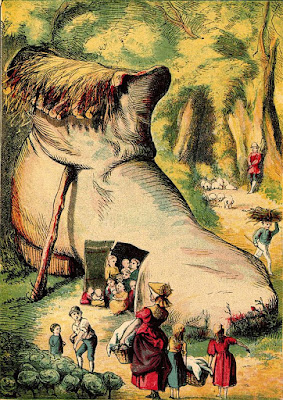 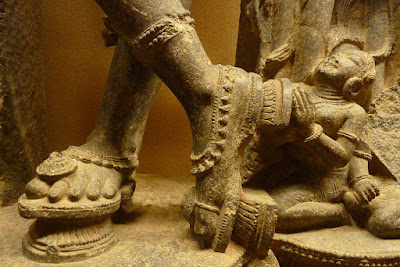 Shoes on a rock 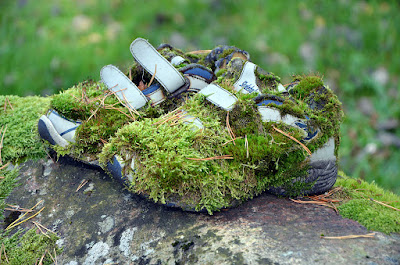 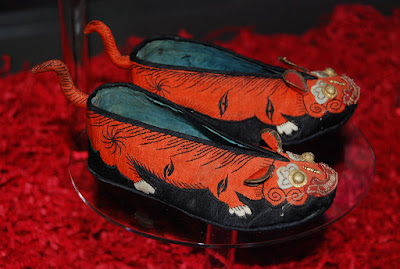 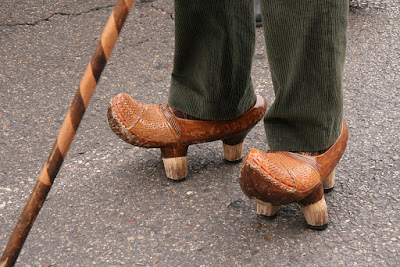 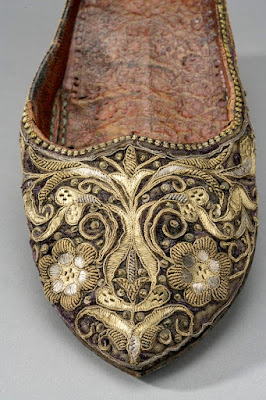 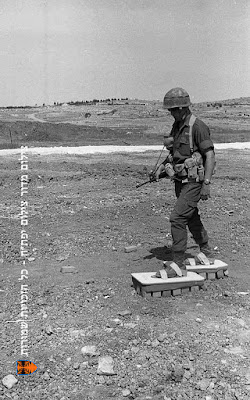 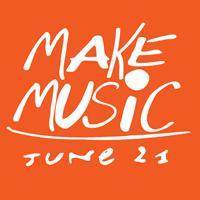 Join the worldwide celebration of music on June 21!

Make Music Day is a free celebration of music around the world on June 21st. Launched in 1982 in France as the Fête de la Musique, it is now held on the same day in more than 700 cities in 120 countries.

Completely different from a typical music festival, Make Music is open to anyone who wants to take part. Every kind of musician — young and old, amateur and professional, of every musical persuasion — pours onto streets, parks, plazas, and porches to share their music with friends, neighbors, and strangers. All of it is free and open to the public.

If you want to play — or to host a performance — follow these easy steps.

1. Check to see if your hometown is already a Make Music city. If so, you’re in luck! Follow the link to their site and get the full details on how to participate.

2. If your city isn’t on board yet, download the Event Kit with tips for setting up and promoting a Make Music event where you live. You can create a concert almost anywhere – storefronts, porches, garages, gardens, parks, or the sidewalk outside your home or business are all options. Then register your event with us and we’ll put it on the schedule.

3. Or come to one of the 100+ Mass Appeal events around the country, where you can just bring your instrument and join in!

4. If you are interested in organizing a larger-scale Make Music celebration in your city, please email dave@makemusicday.org.

And here's a song ... I'm an early bird, so I can't relate to the lyrics of half the songs I like:

Is it okay if I don't post this week?

We've had health issues and I am playing catch-up.

Fortunately, I have this permission slip to be a blog slacker: 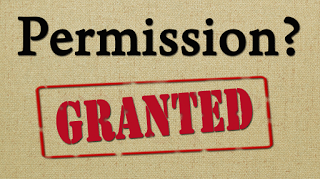 If you think you might need it in the future, feel free to take one for yourself! :-)

"Faced with boredom after a tedious day in Senate estimates, the self-described 'Minister for Books' delved into a volume of Australian bush poetry during a Wednesday evening hearing of the Foreign Affairs, Defence and Trade Committee, according to footage viewed by Fairfax Media."

This poem I'm sharing doesn't have the usual bush poem rhyme and meter, but I found it in a collection of bush poems and summer is on my mind:

I am weary,
Weary of bracing myself against the sun’s hot hand;
I am weary, and I dream of cool places . . . .

I see a grassy couch
Under a canopy of leaves;
A reedy river murmers by,
Crooning an old, old melody
Tuned to a long-forgotten scale,
Made when the world was young.

The sun insists his burning hand upon my head;
I am weary, and I dream of cool places.

Here's another bush poem. This one has an unexpected take on winter: Where Does the Winter Go? by Ethel Turner

When an explosion tore through Reactor 4 of the Chernobyl power plant on April 26, 1986, it was the worst nuclear accident the world had ever seen...
The Chernobyl accident is ranked level 7, the highest on the International Nuclear Event Scale.
The severity of its widespread environmental and human cost has only been equaled by 2011's disaster at Fukushima in Japan.
Contaminated rain and wind depositing radioactive dust were recorded as far afield as Sweden and Wales.
~Anita Isalska, for CNN

This week, we have art relating to the Chernobyl nuclear explosion. There are two videos at the bottom of this post -- one spotlights the disaster itself, and the other focuses on grandmothers who live in the vicinity. 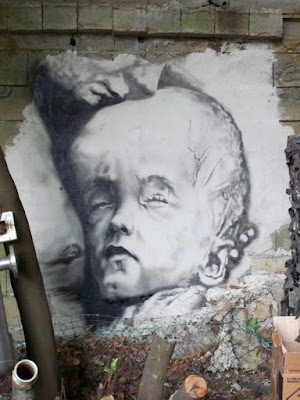 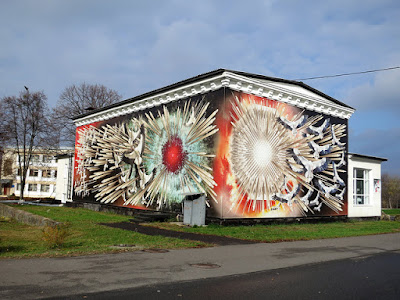 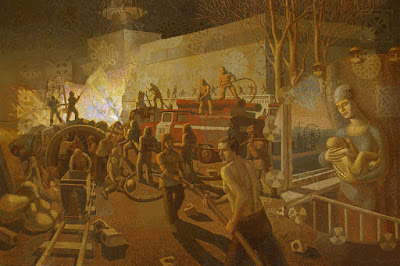 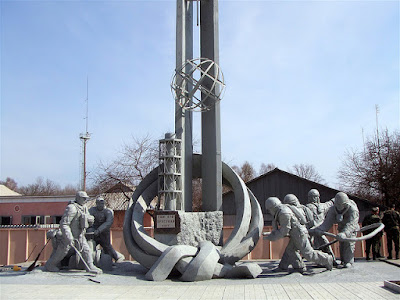 The Chernobyl Memorial, on the spot of the 4th reactor of the Chernobyl Nuclear Power Plant, now covered over
photo by Jennifer Boyer 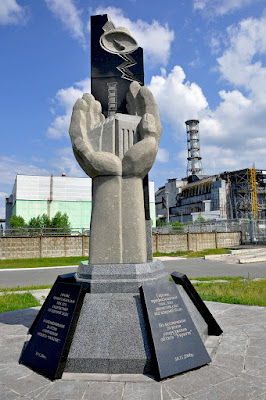 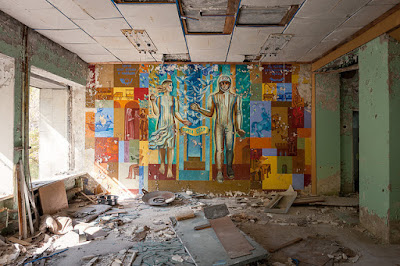 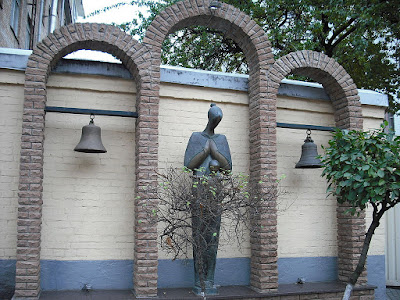 The Babushkas of Chernobyl: a film
Some 200 women defiantly cling to their ancestral homeland in Chernobyl’s radioactive “Exclusion Zone.” While most of their neighbors have long since fled and their husbands have gradually died off, this stubborn sisterhood is hanging on — even, oddly, thriving — while trying to cultivate an existence on toxic earth. ~The Babushkas of Chernobyl


A reenactment of the last hour before the explosion:

Attention history-loving students (and their teachers and parents, etc.)!

The inaugural 2015 International History Olympiad will be held at The College of William and Mary in Williamsburg, Virginia, USA on July 9-15, 2015.

The International History Olympiad will be a week-long celebration of history for students from around the world, with competitions, field trips, seminars with professors, social events, and more.

The organizers are very nice people who are passionate about history. If you have questions, don't hesitate to ask. I think they will allow people to just watch.

Recently, my younger daughter's orchestra performed the Pirates of the Caribbean theme in concert. I am not sure how many times I have heard my kids perform Pirates in concert (3? 4?), but it's always awesome. This song makes me wish I played cello.


Klaus Badelt looks so young, doesn't he?
If you have the Pirates soundtrack playing in your car, it feels like an adventure, no matter what you're doing.

There's no real link between the song and this photo of Penelopeep, except aforementioned child was also in "Into the Woods," and we gave her these tulips because she played Rapunzel and they matched her corn-yellow hair. Turns out, they also match Peep! :-) (It's appropriate that you can see a book that Peep has chewed on in the background. Peep has a tendency to do that...) 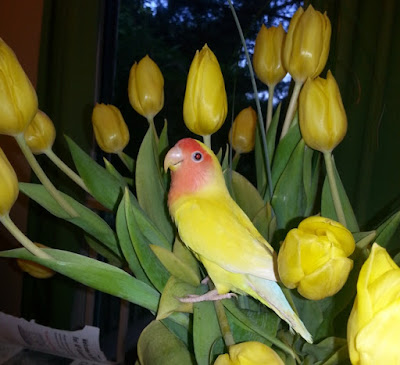