If we discovered that we only had five minutes left to say all that we wanted to say, every telephone booth would be occupied by people calling other people to stammer that they loved them.
~Christopher Morley

For Poetry Friday, a poem that I think would be a great mentor text. So many other things that could be missed! From Rattle, "Don't You Miss the Phone Booth--" by Kate Peper: 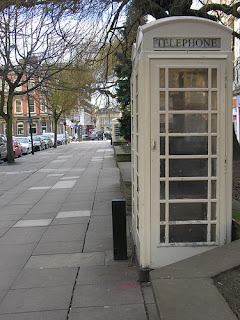 DON’T YOU MISS THE PHONE BOOTH—
by Kate Peper

—a place where once you closed that hinged door
you could still look out, but now the outside world
was hushed and you were in a capsule of privacy?
The etchings of phone numbers, names and expletives
cheering you while you listened to the dial tone,
thinking, grandly, how connected you were
to those who came before you in this one booth.
And wasn’t it comforting, too, to feel the heft and solidity...

I ask myself what is a dictator? I don't understand. It is some kind of terrible person, a bad person. But I am not frightening. I am not a bad person at all.
~Alexander Lukashenko

Time for another artist from Belarus for Art Thursday. When is Lukashenko going to step down? I started posting about him needing to leave last August, and I kept expecting it to happen any day.

I love this cat by Dmitry Kustanovich: 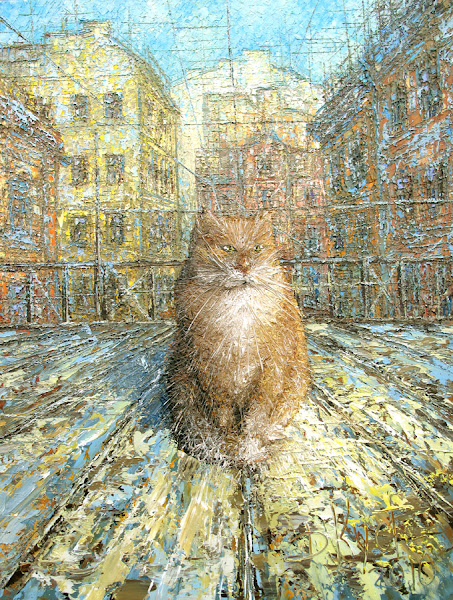 I am mad to think how minute a cause has prevented me hitherto from reading Shakspeare. But until now, every copy that was come-atable to me, happened to be in a vile small print unendurable to my eyes which are tender as young sparrows. But chancing to fall in with this glorious edition, I now exult in it, page after page.
~Herman Melville in a letter to Evert Augustus Duyckinck

I haven't read Herman Melville's Moby Dick, but I am enjoying "reading" it on a random sentence basis on Twitter. I enjoy it so much that I have wondered what other books I'd like to experience this way. Maybe Tolstoy? Something by Isabel Allende?

I always felt that insects are the general rule, and everything else is a special case.
~Paul Bystrak

I know that some folks are sick of photos of cicadas. But Brood X is so photogenic! I haven't posted any yet...this is my one indulgence, a cicada on a peony: 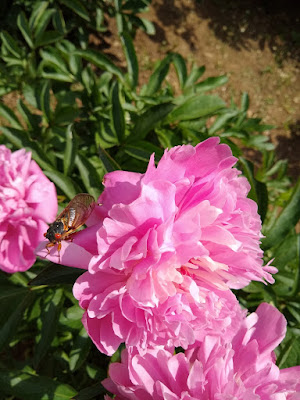 One more peony, because isn't it something with those layers? 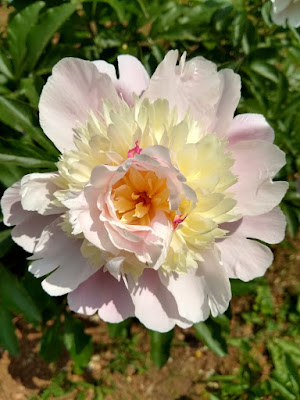 Okay, here's the music for Music Monday. It's a song from Tedeschi Trucks Band’s Layla Revisited (Live At Lock’n), a one-off live recording of Derek & The Dominos album Layla and Other Assorted Love Songs, performed in its entirety with special guest Trey Anastasio. Layla and Other Assorted Love Songs is on my personal top ten albums list (which doesn't exist, tbh, but if it did, this album would be there). You don't mess around with the best, right? But Tedeschi Trucks do it justice.

Addendum: it's sweet to see Susan Tedeschi smile at her husband Derek Trucks while she's singing, and also, doesn't that other fellow remind you of Rupert Grint (from Harry Potter)?

A blessing for riverbanks

I choose to listen to the river for a while, thinking river thoughts, before joining the night and the stars.
~Edward Abbey

Happy Poetry Friday! This week, I posted a call for submissions for IMPERFECT II: poems about perspective for middle schoolers. Check it out!

On to the celebration of Mary Lee! 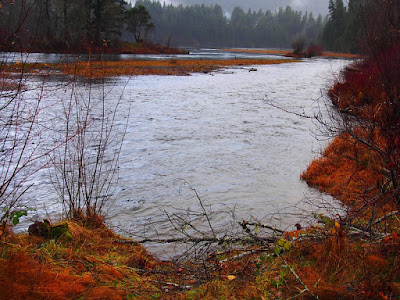 photo by Sandy Brown Jensen
My poem for ML was sideways-inspired by Jone. I wrote a blessing for Jone for the Summer Poem Swap (which I haven't sent to her yet -- hi, Jone!) since she wrote a blessing for my National Poetry Month dual language project. Then when I was thinking about what to write for Mary Lee's retirement party, I decided to write another blessing. This time, the jumping-off point is Mary Lee's poem To My Students, which begins, "I am the riverbank."

A blessing for riverbanks
for Mary Lee

Bless those who sustain
the river on its journey,
rejoicing in its tumult
even as the foaming waves
pummel their centers,
scrub their sides.

Bless those who coax
the reluctant river
to keep moving
on days when
the mud is thick,
the sun is warm,
and all directions
feel the same.

Bless those who cannot know
whether this water will find its way
to the sea, but spend their days
harboring its passage
all the same.

The majority of [Versteegde’s] works are made for temporary display and not intended to be long term or permanent, and consequently have vanished.

Bamboo installations by Antoon Versteegde and Marco Casagrande for Art Thursday. My guess is that Marco Casagrande's work is called "Cicada" because it is like an enormous exoskeleton... 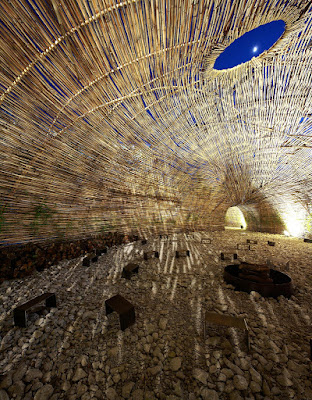 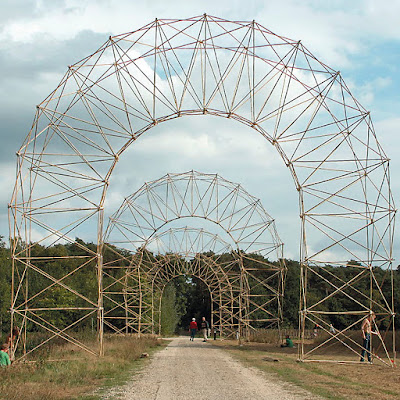 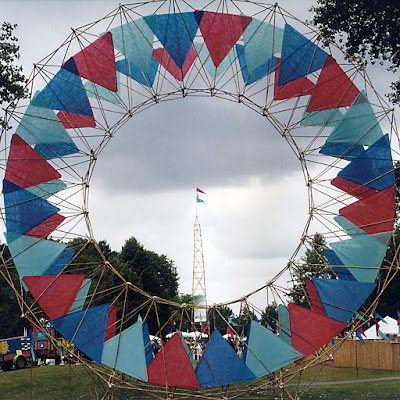 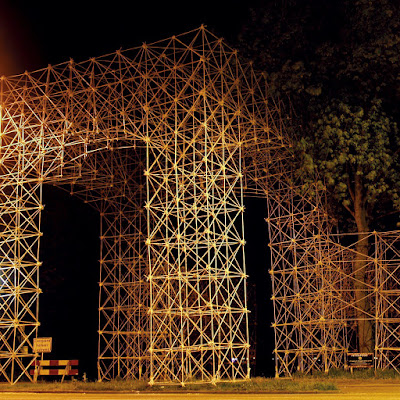 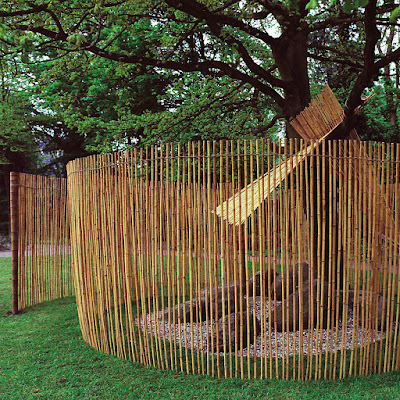 Chinese proverb: “Be like bamboo. The higher you grow, the deeper you bow.”

Doggie snippets today. Have you seen this clip of a dog delivering dog treat truck treats? I didn't know that such a thing existed, but various places have trucks and in San Diego, a "barkery" has a dog treat bike. Love it :-) 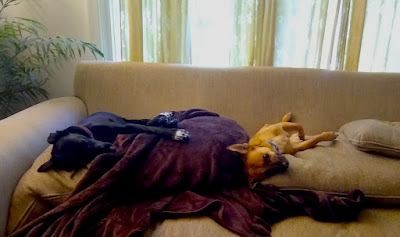 Lucy and Preston being matchy
One of my dogs (Preston) is half the size of my other dog (Lucy) so when Lucy is up to no good, it amuses me to tell her that I'm going to get her and her little dog, too:

Sanskrit (संस्कृता वाक् saṃskṛtā vāk, for short संस्कृतम् saṃskṛtam) is an ancient Indo-European classical language of South Asia, a liturgical language of Hinduism and Buddhism primarily, and utilized occasionally in Jainism. It is one of the twenty-two official languages of India, and an ancestor of the modern Indo-Aryan languages.
~New World Encyclopedia

YouTube suggested this video by Gaiea Sanskrit to me:

Places you can donate to help India during its COVID surge

Happy Poetry Friday! I have a rambly post today. I have to thank Kortney Garrison for her haiku oracle deck idea, which I made my mom for Mother's Day. Like Kortney, Basho was my poet of choice. (I used wallpaper samples to decorate the cards. I wish I had taken a picture!) I'm sure I'll make more.

On Twitter, writer Lauren Collins asked what poems people had memorized in school and what lines stuck. I was very interested in the answers! Many Brits of-a-certain-age memorized daffodils, If, Ozymandias, Dulce, Tyger. One person mentioned that Irish schoolchildren commonly learned Mid-Term Break by Seamus Heaney, which is a complete heartbreaker of a poem.

One of the most popular was Stopping by Woods on a Snowy Evening by Robert Frost:

I memorized “Friends, Romans, countrymen, lend me your ears” by Shakespeare (from Julius Caesar, spoken by Marc Antony). I don't think I was particularly convincing, but my son could get me to follow him into battle with his rendition of Shakespeare's “Once more unto the breach, dear friends, once more” (from Henry V, spoken by King Henry).

My creepiest school poetry memory was arranged by a stern English teacher who I thought of as a character out of The Crucible...I was pretty sure she would have accused us all of being witches. Anyway, she had the entire class read/chant General William Booth Enters into Heaven by Vachel Lindsay, which had such juicy lines as "Vermin-eaten saints with mouldy breath, Unwashed legions with the ways of Death—"

Vachel Lindsay was a poet with range. I had fun reciting this poem of his with my kids:

The Little Turtle
by Vachel Lindsay

There was a little turtle.
He lived in a box.
He swam in a puddle.
He climbed on the rocks.

Live Your Poem has the Poetry Friday round-up. Thanks, Irene!

The Treachery of Scrimmages

Art for me is not an end in itself, but a means of evoking [the essential mystery of the world].
~René Magritte

Hi y'all. I wasn't sure what to post for Art Thursday and then I realized I could post my son Dash's birthday shoes. His girlfriend Vivien painted them. The inspiration was René Magritte's The Treachery of Images: 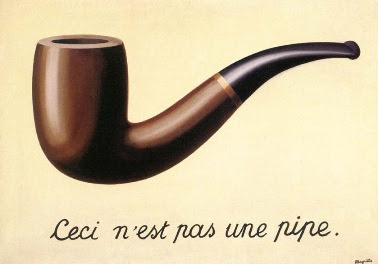 Dash calls them The Treachery of Scrimmages: 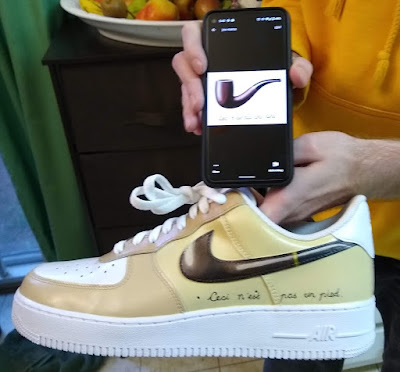 Didn't Viv do an amazing job?

The oboe is a narrow channel through which one must push a flood of expression.
~Robert Bloom

Sad news...something got to Mother Cardinal's eggs :-( I went to take a Mother's Day photo and they were gone. Dang it. I looked up what animals like to eat cardinal eggs, and a bunch of things do, including squirrels, chipmunks, and bluejays. 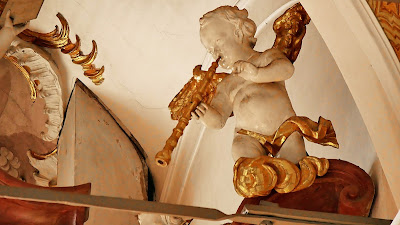 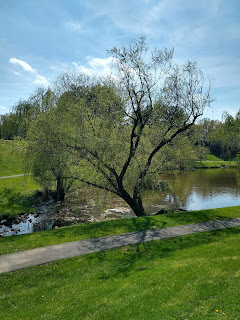 Happy Poetry Friday! What are you up to? I've been doing birthday prep (my son is turning 23 this weekend). Sharing three poems today. The first two are by Rosemerry Wahtola Trommer:

hope gets a flat tire—
the stubborn heart
starts walking

using words
as dowsing rods—
there, the current inside

The Ghosts of My Past Are in Disrepair

My ghosts are faulty.
They congratulate me on my home loan.
I find refrigerator magnets often arranged as words of encouragement:
GREAT JOB, KEEP IT UP CHAMP, etc.
At night, I plug my ears beneath the covers, yet still can hear them bragging about their children’s, grandchildren’s, great great grandchildren’s salaries.
Life has a limited supply of graces to offer,
and I admit to squandering mine,
but they apologize for their part in my transgressions
instead of holding me to account...

Wee Words for Wee Ones has the Poetry Friday round-up. Thanks, Bridget!

Have I ever mentioned how bad my eyesight is without glasses? I don't think so. Well, as I type this, I can't see what I'm typing at all. I think I'm typing the right thing. Fingers crossed! Anyway, my glasses lost a screw this morning so I am not wearing them because I don't want that lens to fall out. They are, in fact, incredibly old. (I got some new ones a couple of years ago, but the prescription seemed off so I preferred my old ones. If I could find them, I still wouldn't be able to see, unfortunately. Time to get some new new ones)

I heard the raven fish crow calling a few minutes ago but I am going to pretend I'm not up because I dont' want her to start asking for her breakfast this early. When she gets insistent, she can be very loud.

Back when I could see, I watched some interesting videos by a young Norwegian maker with a channel called "Nerdforge." She has such patience and precision!

Addendum: I can see again! Thank you, Ben. (New glasses are on my to-do list.)

Everyone needs time to develop their dreams. An egg in the nest doesn't become a bird overnight.
~Lois Ehlert

I wasn't sure whether Mother Cardinal had laid any eggs yet, but here's what I spotted this morning! 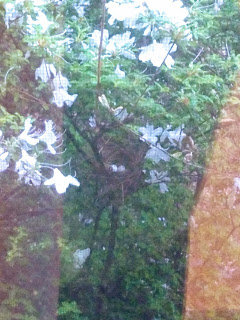 Żebrowska, plus an orange beak

We'll get to fashion in a second! My latest obsessions are bird-related. We have a mother cardinal nesting in a bush right outside our living room window. She pretty much blends in with her nest, but you can see her beak (sorry that the photo is through a screen): 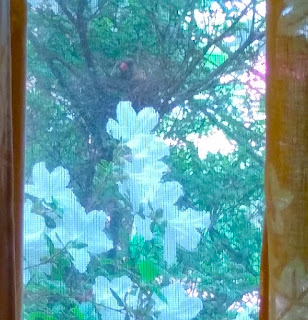 There was a big windstorm Friday and she was waving in the bush like a flag, but she's okay.

I have also been feeding a raven fish crow out my backdoor. Oatcakes and grapes so far. I would like to take a photo or get a good recording! 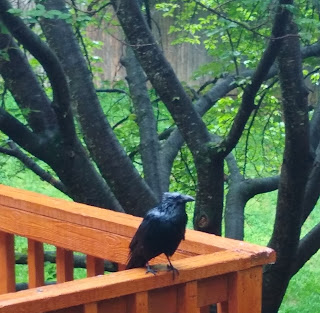