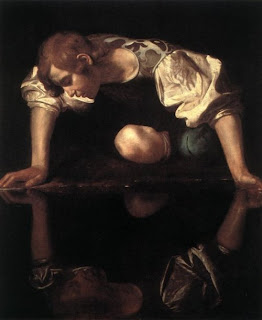 Another painting inspired by a story.

"Narcissus was so handsome everyone loved and desired him, but Narcissus was too proud to offer his love in return. His rejection of one would-be lover, Echo, turned her from an unhappy nymph into the barest wisp of what she had been. Echo shriveled up until all that was left of her was her voice, what we now call by her name.

Not all the would-be lovers of Narcissus were so passive. One of them took his complaint about rejection to the goddess of vengeance, Nemesis. The rejected suitor asked the goddess Nemesis to make Narcissus fall in love with himself, but simultaneously to be incapable of accepting his own love. Nemesis obliged....

On a hot day Narcissus bent down to drink from a clear, silvery pool. As he drank, he saw a beautiful image in the pool. He had never before caught a glimpse of himself. Narcissus fell in love with his own reflection. He tried to kiss and embrace it -- encouraged because he saw the other raising his lips to meet Narcissus' own -- but couldn't. Narcissus could do nothing except keep trying. In time he realized he was in love with his own reflection."

From Narcissus and Echo in Ovid's Metamorphoses: Tiresias Warns About Narcissus By N.S. Gill, About.com

Posted by Tabatha at 3:37 PM No comments: 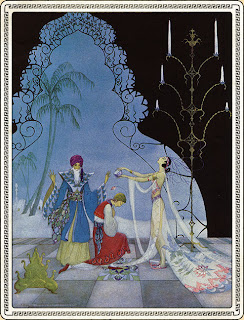 In honor of the upcoming birthday of a great thinker & brave man, this week's poem is actually from a song, James Taylor's Shed a Little Light:

National Poetry Month is April. Teachers, librarians, and booksellers can request a free copy of the 2008 poster here. Posters from past years can be purchased for $5 by the general public here.

Posted by Tabatha at 3:30 PM No comments: 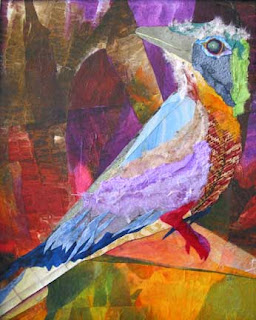 River View through the Arches
by Catherine Wingfield-Yeatts 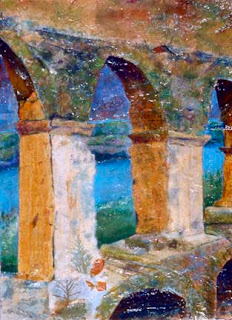 It is my duty to voice the suffering of men, the never-ending sufferings heaped mountain-high.
~ Käthe Kollwitz 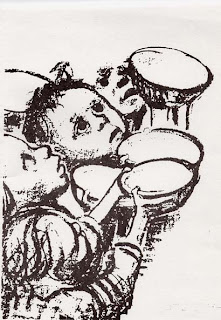 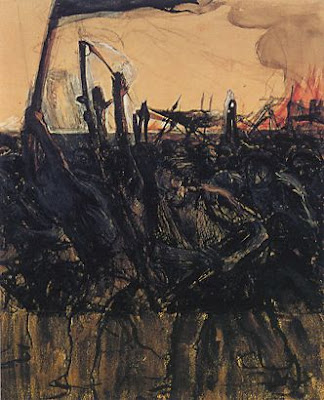 It seems as if everyone is familiar with haiku, but fewer people have heard of tanka. Tanka was developed in the late 700s in Japan and consists of five lines -- traditionally the first and third have five syllables, the second, fourth, and fifth have seven.

A haiga is artwork that is accompanied by haiku, but tanka writers have started making "taigas," like this one by Michael McClintock (poem) and Karen McClintock (art). 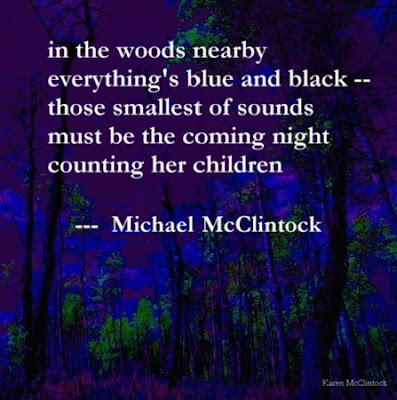 Some additional information from artist Karen McClintock:
The new movement in modern English tanka over the last 20 or so years has strayed away from the formal syllable counting of the past, with many prominent poets dropping it entirely. Poem lines are still short, and three or five lines, but haiku and tanka is being written in our language with an ear to content, flow, lyric, and expression of idea rather than adhering to a strict pattern of syllables which many poets find too confining. My husband (Michael McClintock) pioneered this movement 40 years ago and thinks it is the future direction of the whole genre in the west.

You rice-field maidens!
The only things not muddy
Are the songs you sing.

It's a double bonus day...I am loving all this wonderful imagery!

A curving, leaping line of light,
A crackling roar from hot, red lungs,
A wild flush on the skies of night,
A force that gnaws with hot red tongues,
That leaves a blackened smoking sod
A fiery furnace where the cattle trod.

Posted by Tabatha at 3:25 PM No comments:

The Walk by Nicole Fekaris 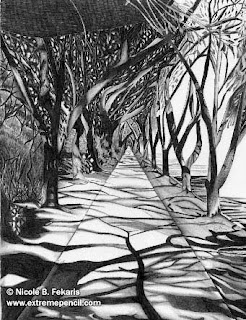 Nicole Fekaris's The Walk drew me right in.

The night is darkening round me,
The wild winds coldly blow;
But a tyrant spell has bound me
And I cannot, cannot go.

The giant trees are bending
Their bare boughs weighed with snow.
And the storm is fast descending,
And yet I cannot go.

Clouds beyond clouds above me,
Wastes beyond wastes below;
But nothing dear can move me;
I will not, cannot go.

Posted by Tabatha at 2:40 PM No comments:

In Which I Begin Art Thursday

Poetry Friday has been such a terrific experience that I decided to start Art Thursday as a kind of journal where I keep track of works that catch my eye.

I thought about beginning Art Thursday with something lovely, but this is the piece that got my attention yesterday. 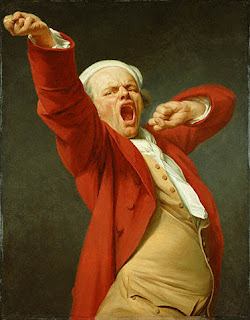 Not lovely, but arresting all the same.