Rare Disease Day is observed every year on 28 February (or 29 in leap years)—the rarest day of the year.
~NORD 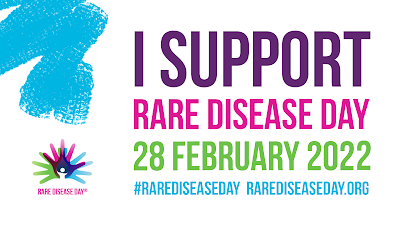 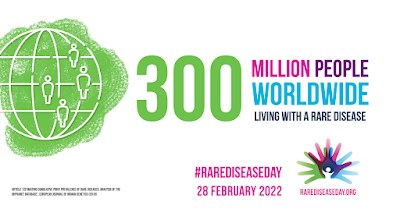 Character is formed in the stormy billows of the world.
~Johann Wolfgang von Goethe

Hi, y'all! I wasn't sure I would post this week because I have been so distracted by current events. Time to revisit ‘Ulysses’ by Alfred, Lord Tennyson. I hear it in Judi Dench's voice ever since I saw "Skyfall": 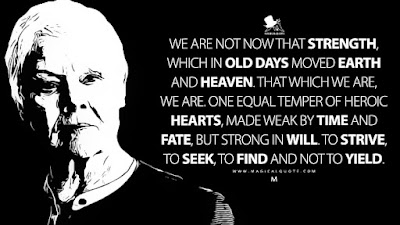 Tho’ much is taken, much abides; and tho’
We are not now that strength which in old days
Moved earth and heaven, that which we are, we are;
One equal temper of heroic hearts,
Made weak by time and fate, but strong in will
To strive, to seek, to find, and not to yield.

I almost forgot to include my other favorite courage-builder -- "Once More Unto the Breach" from Henry V.

The Miss Rumphius Effect has the Poetry Friday roundup. Thanks, Tricia!

The Man Without a Face is the chilling account of how a low- level, small-minded KGB operative ascended to the Russian presidency and, in an astonishingly short time, destroyed years of progress and made his country once more a threat to her own people and to the world.

If you've read my blog for a while, you know how I feel about the dictator in Belarus, so you can imagine how I feel about him turning the country over to Putin. And Putin attacking Ukraine? Heartbreaking, appalling. (And the fact that the right wingers in this country support Putin? Beyond maddening.) 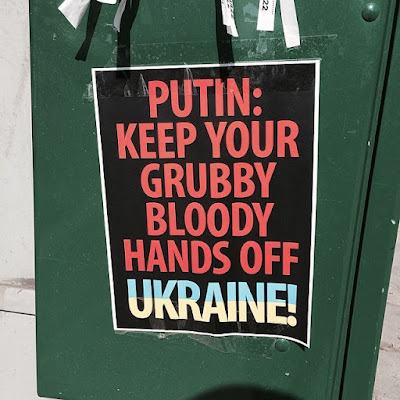 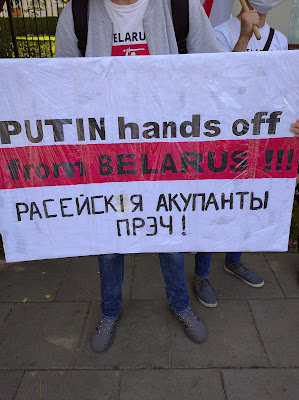 Breathe in deeply to bring your mind home to your body.
~Thich Nhat Hanh

Hi folks! Popping in for a Wellness Wednesday link...

Kindness Club: How To Make a Mindful Breathing Stick.

They suggest this as a kids' project, but it could really be for anybody. I used buttons instead of beads. 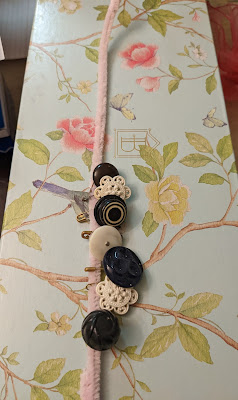 The airplanes slowly taxied to the beginning of the runway, humbly and calmly with flaps down, bowing with deference to the infinite sky.
~Ross Victory

There is an unreasonable joy to be had from the observation of small birds going about their bright, oblivious business.
~Grant Hutchison

The Great Backyard Bird Count is from February 18–21 so I was hoping to have a bird poem to share, and lo and behold, Sylvia Plath came through. Here's a spread from her Bed Book, illustrated by Quentin Blake: 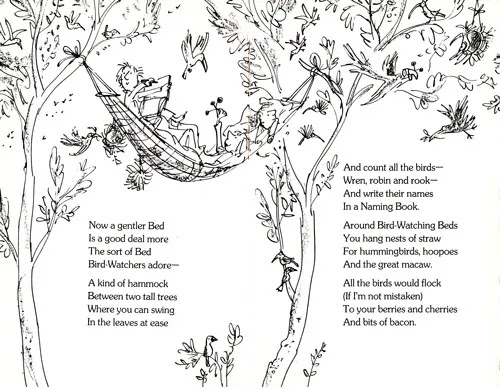 And count all the birds—
Wren, robin and rook—
And write their names
In a Naming Book.

Around Bird-Watching Beds
You hang nests of straw
For hummingbirds, hoopoes
And the great macaw.

All the birds would flock
(If I’m not mistaken)
To your berries and cherries
And bits of bacon.

Small Reads for Brighter Days has the Poetry Friday round-up. Thanks, Laura!

Some of the first uses of folding screens were rather practical. They were used to prevent draft in homes, as indicated by the two characters in their Chinese name: ping (屛 "screen; blocking") and feng (風 "breeze, wind"). They were also used to bestow a sense of privacy; in classical times, folding screens were often placed in rooms to be used as dressing screens for ladies. Folding screens can be set up to partition a large room and change the interior features of the space.
~Wikipedia

For Art Thursday, folding screens. Katayama Bokuyō's is one I would love to own. "[Bokuyō] submitted this painting [to Japan's annual Imperial Juried Exhibition] showing a weasel nearly hidden in a tangled bed of flowering fishmint (dokudani) deep in the forest. The judges were so impressed that he was given the status of mukansa, literally "non-vetted," meaning that henceforth any painting he submitted to the annual exhibition would be automatically included." (Minneapolis Institute of Art)

Forest on silk
by Katayama Bokuyō, 1928 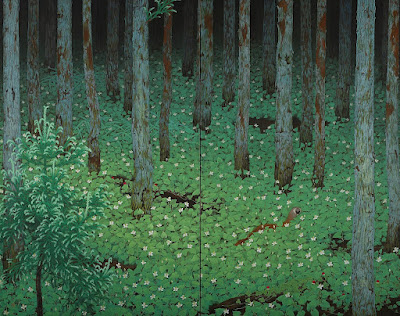 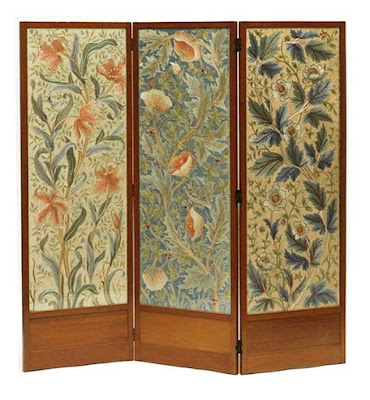 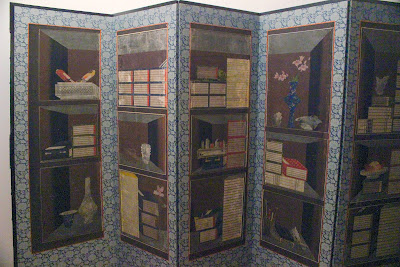 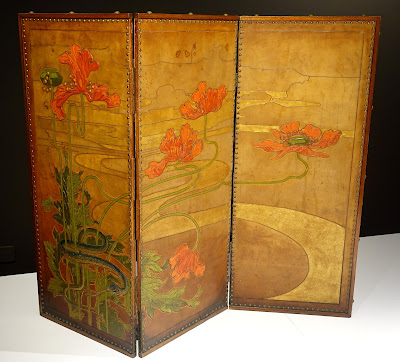 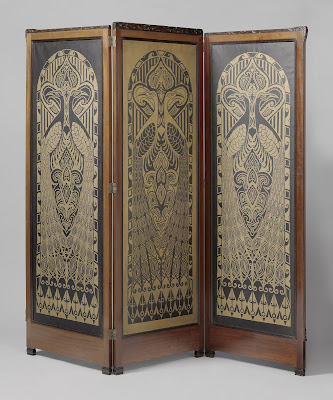 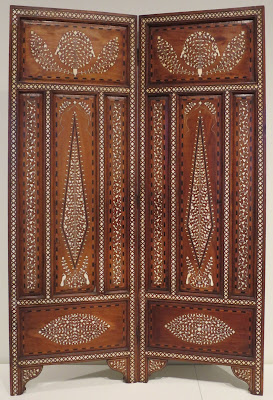 Wherever he laid his hat was his home

[Lisa Fischer] joined the Rolling Stones for their 1989 Steel Wheels tour, and continued to grace their stage for the next 26 years.

Art on a towel

Everything that you can see in the world around you presents itself to your eyes only as an arrangement of patches of different colors.
~John Ruskin

I read about Van Gogh painting on a towel and I was like, "Whaaat?" Apparently, it's true. Here's the scoop from the Van Gogh Museum, Amsterdam:

Van Gogh was a lifelong admirer of the work of Charles-François Daubigny. This celebrated landscape painter had lived in Auvers. So when Vincent arrived in the village, he went to see Daubigny's home and garden as soon as he could. This is Van Gogh's first painting of the garden. He later made two larger ones on canvas.

Because Van Gogh did not have any canvas at hand, he painted the garden on a red and white striped tea towel. He first covered the towel with a bright pink ground layer of lead-white pigment mixed with red. This pink base formed a vivid contrast with the green paint he used for the garden. The ground layer is visible between the strokes of paint. The red pigment has faded over time, so the pink base now looks grey. 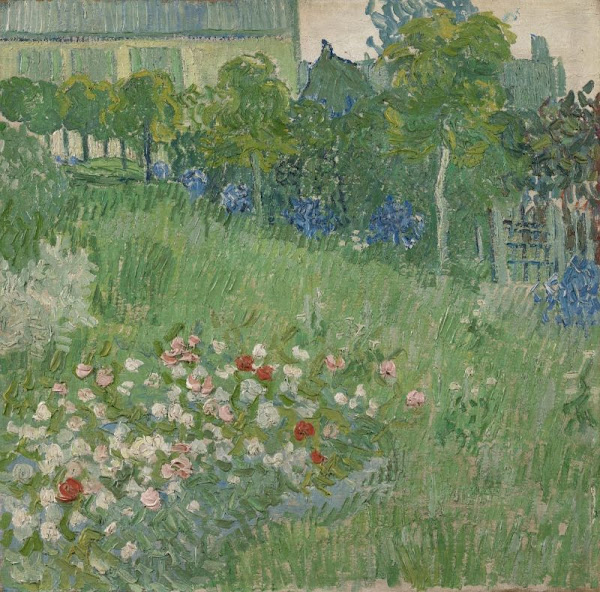 And now a painting by Charles-Francois Daubigny. The Port of Dieppe: 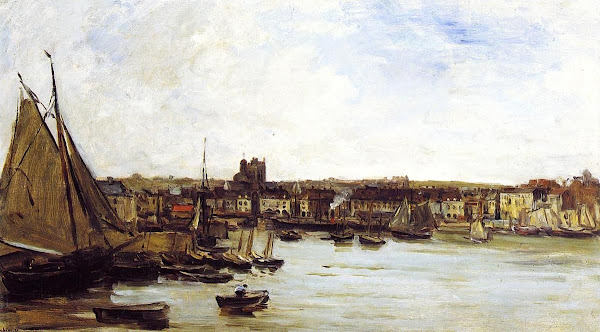 [Reinhardt's] hugely innovative technique included, on a grand scale, such unheard of devices as melodies played in octaves, tremolo chords with shifting notes that sounded like whole horn sections, a complete array of natural and artificial harmonics, highly charged dissonances, super-fast chromatic runs from the open bass strings to the highest notes on the 1st string, an unbelievably flexible and driving right-hand, two and three octave arpeggios, advanced and unconventional chords and a use of the flattened fifth that predated be-bop by a decade...it is little wonder that guitar players were knocked sideways upon their first encounter with this full-blown genius.
~Ian Cruickshank

At age 18, Romani-French musician Django Reinhardt was in a fire that left him severely burned, resulting in permanent injuries to two fingers of his left hand. Somehow, he worked around it. For Music Monday, Minor Swing by Django Reinhart and Stéphane Grappelli and Joseph Joseph by Django and Stéphane-inspired Hot Club du Nax.

Okay, I thought I was done, but here's another Django-inspired group: Showarama Hot Gypsy Jazz. The violinist is "Dr. Sick."

This New Year, may you find peace from within and may you be capable to spread such contentment around you.
~Vietnamese wish

Happy Year of the Tiger! 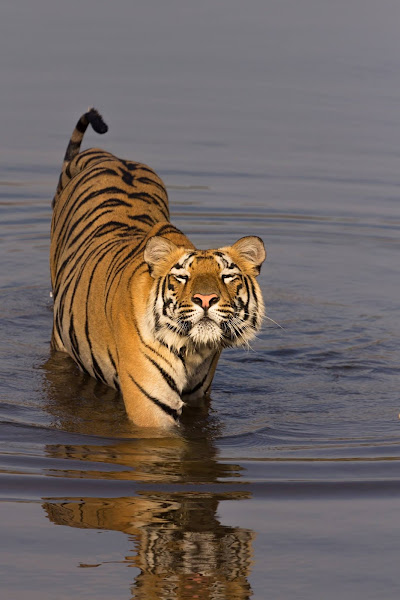 From the World Wildlife Fund:

To a tiger, the forest is life.

It provides trees for shade, rivers for drinking water, and ideal hunting grounds for ambushing prey. One of the best ways to protect forests so that tigers and other wildlife thrive is to buy products that have the Forest Stewardship Council™ (FSC®) label. 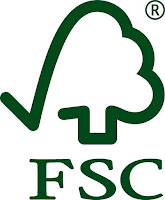 The FSC label means the product is from a responsibly managed forest—one where trees are harvested legally, highly hazardous pesticides are not used, the rights of indigenous people are protected, and more.

And it can be found almost everywhere, as every part of a tree is used to make products—like rubber for shoes and bark for corks.