THE GREAT TABLECLOTH
By Pablo Neruda, from "Extravagaria," translated by Alastair Reid

Let us sit down soon to eat
with all those who haven't eaten,
let us spread great tablecloths,
put salt in the lakes of the world,
set up planetary bakeries,
tables with strawberries in snow,
and a plate like the moon itself
from which we will all eat.
For now I ask no more
than the justice of eating.

How Frugal Our Chariots

There Is No Frigate Like A Book
by Emily Dickinson 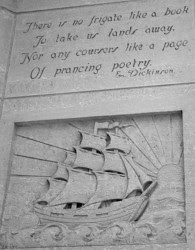 There is no frigate like a book
To take us lands away,
Nor any coursers like a page
Of prancing poetry.
This traverse may the poorest take
Without oppress of toll;
How frugal is the chariot
That bears a human soul!

from The Seed Shop

...Here in their safe and simple house of death,
Sealed in their shells a million roses leap;
Here I can blow a garden with my breath,
And in my hand a forest lies asleep.

Posted by Tabatha at 2:12 PM No comments:

'TWAS Mulga Bill, from Eaglehawk, that caught the cycling craze;
He turned away the good old horse that served him many days;
He dressed himself in cycling clothes, resplendant to be seen;
He hurried off to town and bought a shining new machine;
And as he wheeled it through the door, with air of lordly pride,
The grinning shop assistant said, "Excuse me, can you ride?"
"See here, young man," said Mulga Bill, "from Walgett to the sea,
From Conroy's Gap to Castlereagh, there's none can ride like me.
I'm good all round at everything, as everybody knows,
Although I'm not the one to talk - I hate a man that blows.

"But riding is my special gift, my chiefest, sole delight;
Just ask a wild duck can it swim, a wild cat can it fight.
There's nothing clothed in hair or hide, or built of flesh or steel,
There's nothing walks or jumps, or runs, on axle, hoof or wheel,
But what I'll sit, while hide will hold and girths and straps are tight;
I'll ride this here two-wheeled concern right straight away at sight."

'Twas Mulga Bill, from Eaglehawk, that sought his own abode,
That perched above the Dead Man's Creek, beside the mountain road.
He turned the cycle down the hill and mounted for the fray,
But ere he'd gone a dozen yards it bolted clean away.
It left the track, and through the trees, just like a silver streak,
It whistled down the awful slope towards the Dead Man's Creek.

It shaved a stump by half an inch, it dodged a big white-box:
The very wallaroos in fright went scrambling up the rocks,
The wombats hiding in their caves dug deeper underground,
But Mulga Bill, as white as chalk, clung tight to every bound.
It struck a stone and gave a spring that cleared a fallen tree,
It raced beside a precipice as close as close could be;
And then, as Mulga Bill let out one last despairing shriek,
It made a leap of twenty feet into the Dead Man's Creek.

'Twas Mulga Bill, from Eaglehawk, that slowly swam ashore:
He said, "I've had some narrer shaves and lively rides before;
I've rode a wild bull round a yard to win a five-pound bet,
But that was sure the derndest ride that I've encountered yet.
I'll give that two-wheeled outlaw best; it's shaken all my nerve
To feel it whistle through the air and plunge and buck and swerve.
It's safe at rest in Dead Man's Creek - we'll leave it lying still;
A horse's back is good enough henceforth for Mulga Bill."

Posted by Tabatha at 2:12 PM No comments: