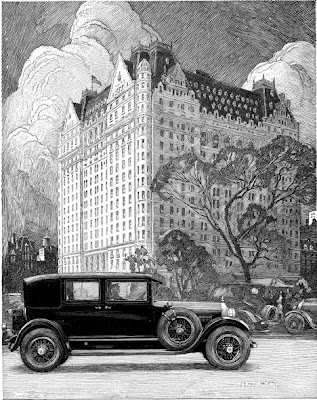 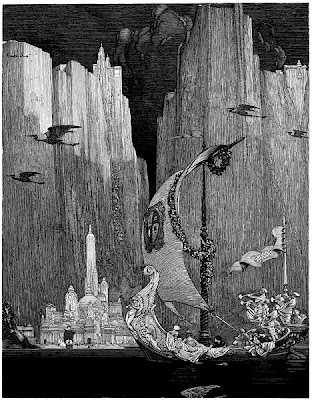 There are helpful lessons about using pen and ink at HomeSchoolArts.com.

Posted by Tabatha at 2:14 PM No comments:

This week we've got info on Poetry Games, followed by a new poem by me.

* You can find computerized poetry games at Poetry 4 Kids.com

1. Pick a theme or leave the theme of your game open. Rip out a piece of paper from your notebook and write a line of a poem on a piece of paper. Fold your line over so it can't be seen by your friend and hand the paper over. Your friend then writes her own line and she folds the paper so you can see neither her line nor yours. Repeat until you fill a side or two (you decide) of paper.

2. You can also tell the person the last word of your line if you want to try a rhyming "poem". These often are quite funny.

3. Once you're done, read it aloud. This exercise helps develop a playfulness and also can produce some interesting combinations. A lot of beginning writers suffer from over seriousness. Not that there's anything wrong with seriousness, but over seriousness spoils many a hard effort. Inject some playfulness into your work and experiment with language. It's a game and it's fun and sometimes breaking yourself out of your typical mode of writing can do a poet at any level some good.

Haikai collaborative poetry (aka renku, or renga) has a long history in Japan, where it combines aspects of game-play with literature. It's a fun and creative group activity which is becoming popular in the west in recent years. You don't need to be a poet to play!
The plan below is for a 12-verse haikai, but there are many other plans (up to 100 verses, if you and your writing partner(s) are feeling energetic!). Each haikai consists of alternating three- and two-line verses.

1. Decide who is to write the first verse. It should make reference to the current surroundings and season (not necessarily by name - e.g. 'Christmas' indicates winter; 'beach' would suggest summer). Three lines, up to 17 syllables total.

2. Pass the writing pad to the next player, for the second verse. This one will be just two lines, up to 14 syllables maximum. Come up with something to suggest the same season as the first verse. It should link to the first verse, but shift away from it a bit as well. After that first verse, everything is fictional.

3. Pass it over to the third player (or back to the first if you are only two). Another three-line verse now, but this one should make no reference to season. And while it should link somehow to the previous verse, this should shift right away from the verse before that (the first verse)

4. Alternate three- and two-line verses. Of every three verses, one or two should mention a season. Main thing is to link (sometimes quite tentatively) to the preceding verse, while always shifting away from the one before that. Link and shift, that's what it's about.

For additional info and a sample poem, visit WikiHow.

The Muse Calls Forth A Poem
by Tabatha Yeatts

Blowing softly into her small horn,
the muse calls forth a poem.

The words rise from the still water
like a swiftly-shooting tendril,
growing and luxuriously unfolding;
petals reaching in all directions,
sturdy enough to hold
the notes of her song
as they seek a place to rest.

Posted by Tabatha at 2:17 PM No comments:

Both of these 19th century artists do a lovely job with facial expressions and textiles. 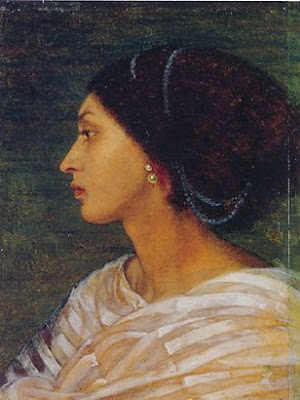 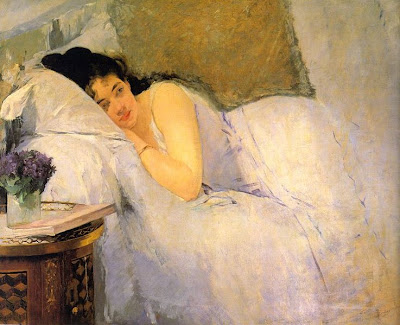 Posted by Tabatha at 2:59 PM No comments:

What Should Poetry Do?

Should poetry be only for a few people, just for special occasions, kept in classrooms? Actually, poetry should ride the bus...

An excerpt of Poetry Should Ride the Bus
By Ruth Forman

...Poetry should ride the bus
In a fat woman’s Safeway bag
Between the greens n chicken wings
To be served with Tuesday’s dinner

Poetry should sing red revolution love songs
That massage your scalp
And bring hope to your blood
When you think you’re too old to fight...

from We Are the Young Magicians. 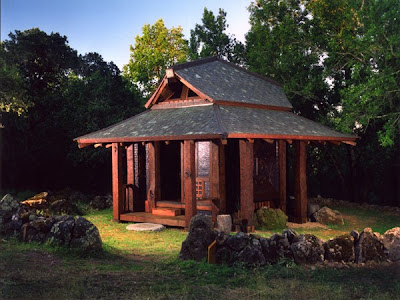 Inspired by a poem penned by Sonoma State University professor Elizabeth Carothers Herron, sculptor Bruce Johnson created a major work of redwood and copper called "Poetry House" as an architectural sculpture in the form of a traditional Japanese teahouse.

Herron, a professor of Arts and Humanities, composed a poem for installation within the sculpture. Herron's epic has been seamlessly blended into Johnson's sculpture, with lines of poetry transcribed onto all of the under-layers of the building, both inside and out, including the roof, walls, floors, and the paper of the central lantern. "The intention is to imbue this small quiet space with poetry," she says.

"So what is a poetry house?" asks Johnson. "I have come to feel that it is the empty space where attention resides..."
Info from Jean Wasp, SSU

Posted by Tabatha at 4:48 AM No comments:

Amazing, ephemeral street painting by Tracy Lee Stum. You can see her in the photo of The Medici Garden, which gives you an idea about the size and scope of her work. She generously offers a recipe for home-made pastels that can be used for street painting. 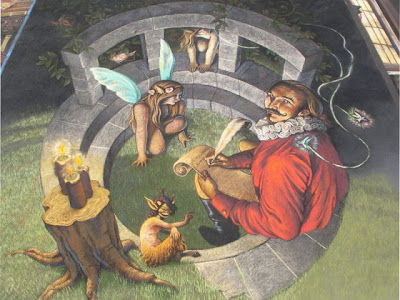 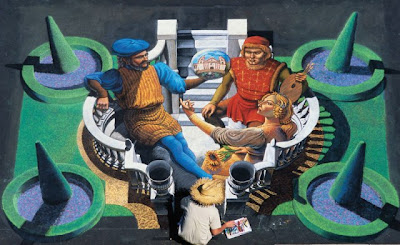 Chalk for Peace is a worldwide chalk art project for young artists. This year, events will be taking place from September 14-21, 2008. Join in!

Posted by Tabatha at 3:05 PM No comments:

I checked out The Sound of Colors by Jimmy Liao from the library, but it is so gorgeous that I would like to get my own copy. This picture book, which was also made into a movie, is about a young girl coming to grips with the loss of her sight. She goes into the subway on a “journey of the imagination.”

Poet and storyteller Edgar Allan Poe explained that poetry is "the rhythmical creation of Beauty.” E.A. Robinson define poetry as “language that tells us, through a more or less emotional reaction, something that can not be said.” For those two reasons, I'm including The Sound of Colors in Poetry Friday.

When at last I walk out of the tunnel,
I can't see the light,
but I can feel the leaves
falling like sunshine all around me.

“I’ve forgotten how blue the sky can be,” the girl says,
“But in my mind I still
watch the clouds change shape.”

Another book-related poem...I picked up The Land of the Silver Apples by Nancy Farmer (sequel to The Sea of Trolls, which I loved). After the pages listing the cast of characters, there was a poem called The Song of Wandering Aengus. I assumed it was written by the author, so as I read it, I thought, “That Nancy Farmer can write a nice poem.” But then my eyes flicked to the bottom and I saw William Butler Yeats had actually written it. My bad.

Well, I think it's already been established that W.B. can write a nice poem. See for yourself:

The Song of Wandering Aengus
By W.B. Yeats

I went out to the hazel wood,
Because a fire was in my head,
And cut and peeled a hazel wand,
And hooked a berry to a thread;
And when white moths were on the wing,
And moth-like stars were flickering out,
I dropped the berry in a stream
And caught a little silver trout.

Though I am old with wandering
Through hollow lands and hilly lands,
I will find out where she has gone,
And kiss her lips and take her hands;
And walk among long dappled grass,
And pluck till time and times are done
The silver apples of the moon,
The golden apples of the sun.

Posted by Tabatha at 1:54 PM No comments: 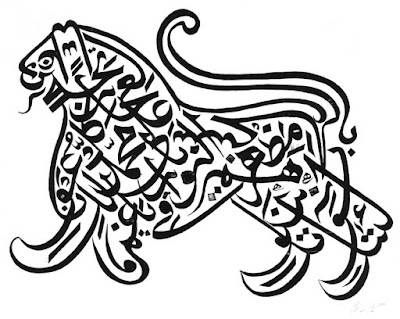 This image of a lion originates from Lahore, Pakistan and is part of a rich tradition of zoomorphic calligraphy. This practice, developed in the sixteenth century, employs the flexibility and beauty of Arabic script to delineate living forms such as tigers, parrots, ostriches and cockerels. This is done without disobeying religious injunctions that prohibit their direct depiction.

Texts themselves might constitute verses from the Qur’an and include puns relating to the ‘word-picture’, particularly in Shia iconography. A famous example contains a prayer to Ali, the Prophet’s son-in-law, also known as Haidar or ‘lion’.
Information from the Tate Gallery, UK. 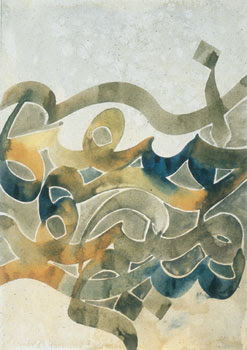 You can find more of Khaled al-Saa'i's work here.

Posted by Tabatha at 3:08 PM No comments:

Composer Antonio Vivaldi's violin concertos The Four Seasons were published in 1725. Vivaldi wrote a sonnet to go with each season. You can listen to the music as you read and see how the two complement each other. This is an electric guitar version and here is Willard Scott reading the poem as the music plays. On this NASA site, you can listen to portions of each season and guess which is which.

Allegro non molto
Beneath this hard season of the burning sun
Man and flocks languish and pines burn;
The cuckoo raises its stuttering voice;
The turtle dove and goldfinch sing in answer.
The sweet Zephyr blows, but is challenged
As Boreas (the north wind) invades his territory.
The shepherd weeps because he fears
The fierce looming storm, and for his destiny.

Adagio e piano - Presto e forte
Depriving his tired limbs of rest
Is fear of lightning and fierce thunder
And flies, large and small
In a furious swarm.

Presto
Ah, his fears are all too true,
Flashes and thunder in the heavens and hail
Dashing the heads from the stalks
Of the ripe grain.

Posted by Tabatha at 6:50 PM No comments:

In Honor of the 4th of July

This Land Is Your Land
By Woody Guthrie

This land is your land, This land is my land
From California to the New York island;
From the red wood forest to the Gulf Stream waters
This land was made for you and me.

As I was walking that ribbon of highway,
I saw above me that endless skyway:
I saw below me that golden valley:
This land was made for you and me.

I've roamed and rambled and I followed my footsteps
To the sparkling sands of her diamond deserts;
And all around me, a voice was sounding:
This land was made for you and me.

When the sun came shining, and I was strolling,
And the wheat fields waving and the dust clouds rolling,
As the fog was lifting a voice was chanting:
This land was made for you and me.

As I went walking I saw a sign there
And on the sign it said "No Trespassing."
But on the other side it didn't say nothing,
That side was made for you and me.

In the shadow of the steeple I saw my people,
By the relief office I seen my people;
As they stood there hungry, I stood there asking
Is this land made for you and me?

Posted by Tabatha at 2:04 PM No comments: