Mystery is at the heart of creativity. That, and surprise.
~Julia Cameron

I come by my eccentric imagination from both of my parents. My father writes and makes digital art and my mother makes mixed media art, among other things. I thought it would be cool if we did something like the SPARK project, where an artist and a poet swap work and create something. My dad made a digital art work to go with my donut poem and I used this piece by my dad to write a poem: 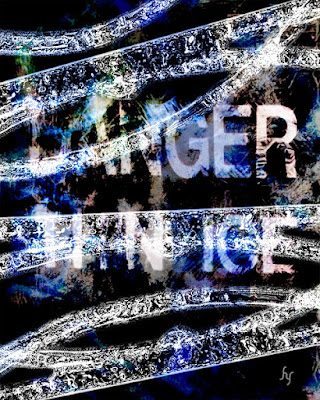 I wrote a golden shovel (poem where the last words of each line form a sentence) inspired by my dad's "Danger Thin Ice" and using the following quote:

The dog delights in being where the snow is
and circles the pond with happy abandon like
a baby for whom the bathtub is a
playground for squealing and smacking the thin
layer
of
bubbles. The dog skitters around the ice,
making her owner nervous. But it's the boys up on
the hill, readying their sleds to go down again, a
run in a long line of runs, while the sun considers drifting deep
behind the mountain, sliding behind an ocean
of clouds, whom the dog's owner should be thinking of.
Even though they have coasted that path before, chaos
is not such a far detour from laughter, and
the glint of ice's light, not so far from darkness.

Going to Walden has the Poetry Friday round-up. Thanks, Tara!

Thanks for sharing. It's always cool when different types of makers can come together and collaborate on various projects :)

Oh wow! How very clever you are, adding that sinister layer into your golden shovel. (And I love the heart of your project. Am sure your dad does, too!)

Both your golden shovel and the art that inspired it are so very good. Bravo to you both!

This is one of the poems I actually could write an essay about, so I probably should do that so my dad can read that too! I imagine us (Americans) being like the boys on the hill, expecting that the ice will hold because it held in the past, when actually it has grown weak. The shape of the poem is thin in the middle, like a spot that could break under the unwary. The pleasant side of water/life/civilization (snow, bathtub, "ocean of clouds") is directly mentioned, but the flip side, the water that menaces, is just an undercurrent, ha ha. Will the boys stop before the ice gives out? We don't know, do we?

I can see why you could write an essay about the ideas behind this fabulous poem, Tabatha. A poem for our times, too. Loved these lines:
....chaos
is not such a far detour from laughter, and
the glint of ice's light, not so far from darkness.

How totally cool that you could collaborate with you Dad. Gorgeous art and the poem captures it.

Wow! This poem gives me the shivers.....the danger lurking where the dog's owner isn't looking. YIKES! Really beautiful, short story in this golden shovel. And, that you get to collaborate with your Dad?! That's truly icing on the cake. I love how one line of your poem is simply, "of". It makes me slow down and wonder.

Wow, that's so cool - I come from a family of readers, but not so much creators, though my grandmother did dabble in painting and story writing!

Another wow from me! What fun to be able to make art with your artistic family! Those are some family treasures for sure! Love how your poem moves the reader's eye from the dog to the sledding boys who are oblivious.

My father is an artist, and I've written a chapbook of poems to his art as well as used it to inspire my April poem-a-day. I love your golden shovel for a few reasons; one, the line gets hidden inside the poem, and two, the action that can lead to chaos or laughter. We are always teetering on the edge between light and dark. A wonderful Art Spark!

Strong, powerful poem Tabatha, you brought memories back of Werner Herzog's book and film Fitzcarraldo, which so fascinated me. Gorgeous image by your Dad, an inspiring piece. So you've had it coming and going with two artist/writer parents, both my kids have that too and are both in the arts. Thanks for this rich post!

I love the way you've shown both sides of chaos. Great job!

How wonderful that you are able to collaborate with your parents! Your poem is stunning. I am in awe of how you effortlessly glide from "happy abandon" to "chaos is not such a far detour from laughter." Thank you for sharing, Tabatha.

What a chilling twist to your poem. There are so many layers of things to think about. If you write that essay, I hope you share it, too.

Oooooooh shivers! I admire your hereditary eccentric imagination, my dear. And I love Imaginary Billy, too.

I love how you've used the title of your poem to start the Werner Herzog quote. I am nervous, too, about the chaos and darkness.

This is glorious, Tabatha. I'm sorry I missed it when first you posted it - but so glad I caught it today. I do love Golden Shovels. They bring something special to the poetry line-up.

Giggling... because I see I DID see this in January. And I was equally impressed then. (My mind is obviously still addled.)

Hi Tabatha: This is really "cool"... thin sheet of ice not withstanding. I have not tried golden shovel poems, but this one is surely a good model. Thanks so much for sharing it, as well as your father's art... both stunning. Enjoy your week...