Knowledge is high in the head, but the salmon of wisdom swims deep.
~Neil Gunn

According to the story, an ordinary salmon ate nine hazelnuts that fell into the Well of Wisdom (aka Tobar Segais) from nine hazel trees that surrounded the well. By this act, the salmon gained all the world's knowledge. The first person to eat of its flesh would in turn gain this knowledge.

The poet Finn Eces spent seven years fishing for this salmon. One day Finn Eces caught Fintan and gave the fish to Fionn, his servant and son of Cumhaill, with instructions not to eat it. Fionn cooked the salmon, turning it over and over, but when Fionn touched the fish with his thumb to see if it was cooked, he burnt his finger on a drop of hot cooking fish fat. Fionn sucked on his burned finger to ease the pain. Little did Fionn know that all of Fintan's wisdom had been concentrated into that one drop of fish fat. When he brought the cooked meal to Finn Eces, his master saw that the boy's eyes shone with a previously unseen wisdom. Finn Eces asked Fionn if he had eaten any of the salmon. Answering no, the boy explained what had happened. Finn Eces realized that Fionn had received the wisdom of the salmon, so gave him the rest of the fish to eat. Fionn ate the salmon and in so doing gained all the knowledge of the world. Throughout the rest of his life, Fionn could draw upon this knowledge merely by biting his thumb. The deep knowledge and wisdom gained from Fintan, the Salmon of Knowledge, allowed Fionn to become the leader of the Fianna, the famed heroes of Irish myth...

In Welsh mythology, the story of how the poet Taliesin received his wisdom follows a similar pattern, as does the Norse tale of the slaying of the dragon Fafnir by the warrior Sigurd. [Wikipedia] 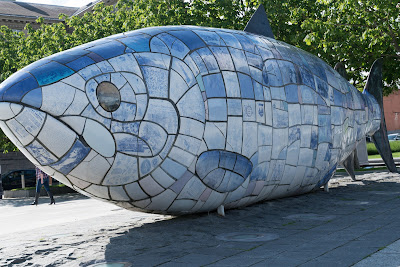 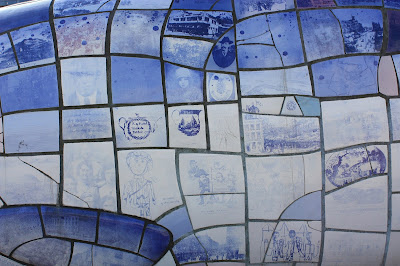 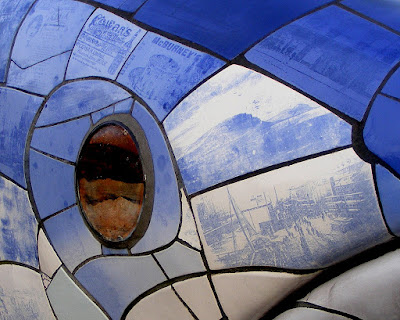 What a wonderful story and an amazing sculpture to accompany it! I'm so glad you included some close ups of the sculptured fish.Without them, I would never have noticed all that compelling detail. It must be amazing to see and examine in person. Thanks for sharing. (PS I bit my thumb and nothing happened...had to try though!)

I wonder just how many viewers bit their thumbs after reading this. I must admit that I did, too. :-)

Wonderful bit of trivia and a fantastic piece of art to go with it.

That fish is glorious! And if only wisdom were so easy to come by, right?