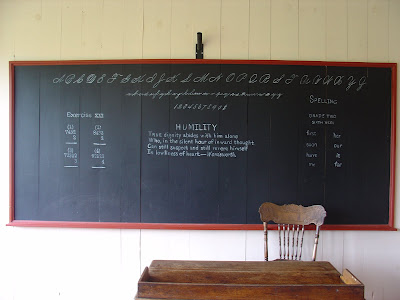 Had a great trip, which I'm sure I will be talking about over the weeks!

I thought I would post a snippet of a poem that was on the blackboard of a one-room schoolhouse I visited in the Highland Village Museum in Iona, Cape Breton, Canada.

Stranger! henceforth be warned; and know that pride,
Howe'er disguised in its own majesty,
Is littleness; that he, who feels contempt
For any living thing, hath faculties
Which he has never used; that thought with him
Is in its infancy. The man whose eye
Is ever on himself doth look on one,
The least of Nature's works, one who might move
The wise man to that scorn which wisdom holds
Unlawful, ever. O be wiser, Thou!
Instructed that true knowledge leads to love;
True dignity abides with him alone
Who, in the silent hour of inward thought,
Can still suspect, and still revere himself
In lowliness of heart.

I like that children were pondering Wordsworth's complicated language. And I like Wordsworth's thoughts on pride and humility. "...he, who feels contempt For any living thing, hath faculties Which he has never used; that thought with him Is in its infancy...O be wiser, Thou!"