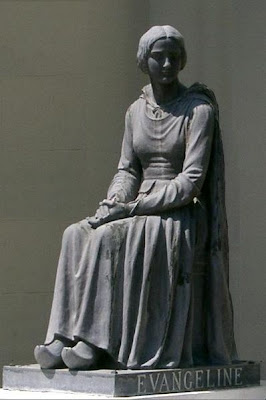 When I was in Chéticamp, Cape Breton, I learned about the deportation of the French Acadians from Nova Scotia by the British in 1755.

In 1845, Henry Wadsworth Longfellow heard the story of the Acadians while at Nathaniel Hawthorne's home and asked if he could write about it. With permission granted, he set to work. Longfellow's epic poem Evangeline: A Tale of Acadie was released in 1847.

The basic story is this: An Acadian girl named Evangeline Bellefontaine is about to marry her beloved, Gabriel Lajeunesse, but the British separate them when the Acadians are deported from Canada. The poem then traces Evangeline's steps as she looks for Gabriel across America. She finally becomes a nun, working with the poor in Philadelphia. While Evangeline is taking care of victims of an epidemic, she finds Gabriel, who dies in her arms.

Here are some excerpts from Longfellow's Evangeline, A Tale of Acadie (and I've got links to the full text and more at the bottom):

THIS is the forest primeval. The murmuring pines and the hemlocks,
Bearded with moss, and in garments green, indistinct in the twilight,
Stand like Druids of eld, with voices sad and prophetic,
Stand like harpers hoar, with beards that rest on their bosoms.
Loud from its rocky caverns, the deep-voiced neighboring ocean
Speaks, and in accents disconsolate answers the wail of the forest. 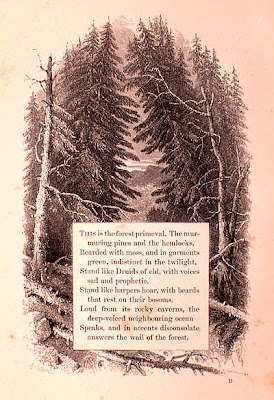 FOUR times the sun had risen and set; and now on the fifth day
Cheerily called the cock to the sleeping maids of the farmhouse.
Soon o'er the yellow fields, in silent and mournful procession,
Came from the neighboring hamlets and farms the Acadian women,
Driving in ponderous wains their household goods to the seashore,
Pausing and looking back to gaze once more on their dwellings.

Acadians in Chains
Evangeline, A Tale of Acadie, by Henry Wadsworth Longfellow; engraving from a design by Jane E. Benham. 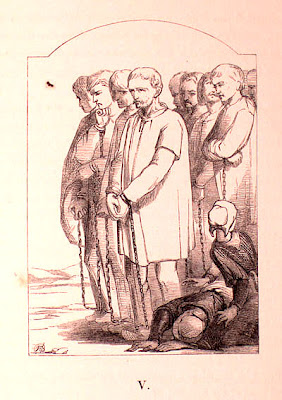 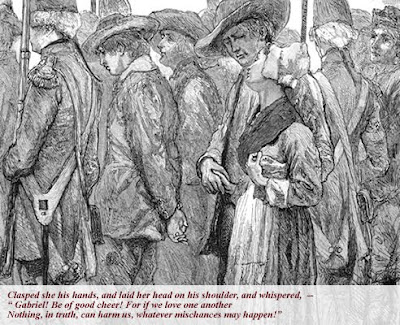 MANY a weary year had passed since the burning of Grand-Pré,
When on the falling tide the freighted vessels departed,
Bearing a nation, with all its household gods, into exile,
Exile without an end, and without an example in story.
Far asunder, on separate coasts, the Acadians landed;
Scattered were they, like flakes of snow when the wind from the northeast 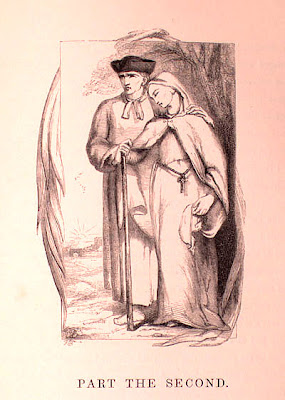 Here on its fragile stalk, to direct the traveler's journey
Over the sea-like, pathless, limitless waste of the desert.
Such in the soul of man is faith. The blossoms of passion,
Gay and luxuriant flowers, are brighter and fuller of fragrance,
But they beguile us, and lead us astray, and their odor is deadly.
Only this humble plant can guide us here, and hereafter
Crown us with asphodel flowers, that are wet with the dews of nepenthe."
So came the autumn, and passed, and the winter -- yet Gabriel came not;
Blossomed the opening spring, and the notes of the robin and bluebird
Sounded sweet upon wold and in wood, yet Gabriel came not.
But on the breath of the summer winds a rumor was wafted
Sweeter than song of bird, or hue or odor of blossom.
Far to the north and east, it said, in the Michigan forests,
Gabriel had his lodge by the banks of the Saginaw river.
And, with returning guides, that sought the lakes of St. Lawrence,
Saying a sad farewell, Evangeline went from the Mission.
When over weary ways, by long and perilous marches,
She had attained at length the depths of the Michigan forests,
Found she the hunter's lodge deserted and fallen to ruin!

She found him at last:

Heard he that cry of pain, and through the hush that succeeded
Whispered a gentle voice, in accents tender and saint-like,
"Gabriel! O my beloved!" and died away into silence.
Then he beheld, in a dream, once more the home of his childhood;
Green Acadian meadows, with sylvan rivers among them,
Village, and mountain, and woodlands; and, walking under their shadow,
As in the days of her youth, Evangeline rose in his vision.
Tears came into his eyes; and as slowly he lifted his eyelids,
Vanished the vision away, but Evangeline knelt by his bedside.

Maidens still wear their Norman caps and their kirtles of homespun,
And by the evening fire repeat Evangeline's story,
While from its rocky caverns the deep-voiced, neighboring ocean
Speaks, and in accents disconsolate answers the wail of the forest.

Links:
An exhibit from the Historic New Orleans Collection about Evangeline: From Tragic Heroine to Cultural Icon
The Story of Evangeline's Empty Grave: A Louisiana Tale
A History of Evangeline Paintings by George Rodrique
Resources for Teaching Longfellow
Evangeline: The Musical
The Full Text of Evangeline from Project Gutenberg

This week's Poetry Friday round-up is at Language Literacy Love.

Wow -- loved these lines: "Then he beheld, in a dream, once more the home of his childhood; Green Acadian meadows, with sylvan rivers among them, Village, and mountain, and woodlands" because Evangeline's voice is so evocative for Gabriel. Beautiful!

This was a wonderful post. I really enjoyed opportunity to reconnect with with Longfellow, one of my favorites.