Last week's Poetry Friday post was all about suffrage. This week, I am all over the place: calligraphy, the law, politics, poems in schools.

First up, poetry popping up in politics. I think there are benefits to memorizing poetry and Maryland politician Rushern Baker seems to agree. County Executive Baker's wife has been diagnosed with Alzheimer’s disease and when Baker gave testimony on behalf of an Alzheimer's bill, he mentioned a poem he had memorized as a young man:

When I was in college, there was a poem I learned when I was pledging my fraternity. It is a poem that I often recite when things get tough. It is a poem about perseverance and overcoming adversity. The poem is "See it Through" by Edgar A. Guest. I think the last stanza of the poem describes the mindset of people like me who struggle with this disease. The last stanza goes like this: “Even hope may seem but futile, when with troubles you’re beset, but remember you are facing just what other men have met. You may fail, but fall still fighting, don’t give up, whate’er you do. Eyes front, head high to the finish. See it through!”

Another poem by Edgar Guest
Memorizing poems for Poetry Out Loud

Poetry in the Court... Apparently sometimes judges want to inject a little poetry into their work with rulings that rewrite classic poetry into court decisions:

Fisher v Lowe was about an owner seeking compensation for his oak tree, which was hit because of the defendant’s careless driving. The plaintiff lost the case, and the judge at the appeal court delivered his judgement in verse, in a parody of Joyce Kilmer’s “Trees”:

We thought that we would never see
A suit to compensate a tree.

read the rest here (scroll down)

Re: poems in schools. One nice thing to do for National Poetry Month is to put up oversized, laminated poems in the halls. Here are some poems that could work well for various ages:

In the Land of Words by Eloise Greenfield, Who's Rich? by Naomi Shihab Nye, Frozen Dream by Shel Silverstein, Earth Whispers by Julie O'Callaghan, Present Light by Charles Ghigna, Ancient Tree by Matt Goodfellow, Stars by Mary Lee Hahn, Rachel Carson, Reborn at Sea by Laura Purdie Salas, Old Names, New Names by J. Patrick Lewis, Faith of a Mustard Seed by Anita Hope Smith, Words Count by Greg Pincus, Air Guitar by Greg, What is Poetry by Bob Raczka, If I had known by Mary Carolyn Davies, The World is a Box by Sophie Hannah, Mystery Flower by Ralph Fletcher, I am Huffing, I am Puffing by Graham Denton, Naked by Matt Forrest Esenwine, What Changes?, and Open-Hearted.

Lastly, I'm sharing a little beauty. I don't know what these say, but I love them anyway. This project presents poems by Gábor Nagy & Sándor Weöres & János Pilinszky written in colorful calligraphy by Boglárka Nádi: 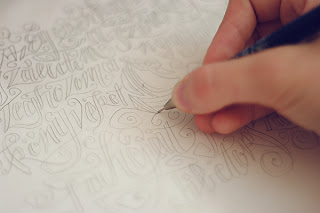 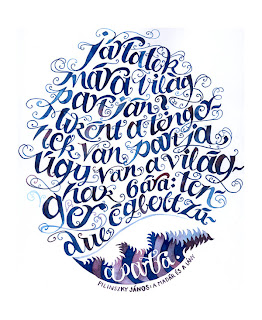 If you missed the song "Don't Pick a Fight with a Poet" from earlier in the week, you might want to check it out.

Heidi has the Poetry Friday round-up at My Juicy Little Universe.

We were on the same wave length with Alzheimer's -- that Guest poem being a source of strength and inspiration for Mr. Baker.

I like the calligraphy poem too. We don't necessarily have to understand the words to appreciate the visual beauty. :)

Hi, Tabatha! I thought of Jama's post today too when I read this. Thanks for an eclectic, inspiring offering today (that calligraphy is beautiful) and the link to Madeleine Peyroux. (What a great title for a song!)

So great to have those links for poetry month, Tabatha, & I like the Edgar Guest, always a little advice from him. The Judge's poem is clever, isn't it? I've had a few lawyers through the years as parents of students & they often had creative hobbies. Interesting about some professions that demand some relaxation in outer pursuits. Thanks!

I love the Edgar Guest poem as well. How uplifting and inspiring. I just thought about Langston Hughes "Dream Deferred" to add to the poetry in school you have listed here.

Sorry for posting the wrong link to your PF musings...I like the "poetry in the news" round-up...maybe poetry is not dead in American life after all. But contemporary poets don't seem to be making it in; hence the need to laminate some of those new ones onto young brains. Will there be poetry in the halls at EMS this year? Not sure, but there WILL be Gayle Danley!

Happy birthday time to you too!

Wow...the poetry presents are fabulous, just breathtakingly beautiful. Thanks for the links, too, Tabatha...I'm trying to get the Grumpy Guses in my sixth grade team to do something as a grade for April...but I think I will have to go it alone. Anyway - such wonderful choices in your collection!