A gentleman opposed to their enfranchisement once said to me, "Women have never produced anything of any value to the world." I told him the chief product of the women had been the men, and left it to him to decide whether the product was of any value.
~Anna Howard Shaw 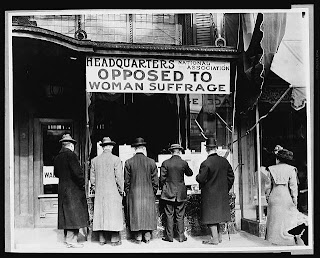 National Anti-Suffrage Association, photo from the Library of Congress

A Consistent Anti to Her Son
by Alice Duer Miller
("Look at the hazards, the risks, the physical dangers that ladies would be exposed to at the polls."—Anti-suffrage speech.)

You must not go to the polls, Willie,
Never go to the polls,
They're dark and dreadful places
Where many lose their souls;
They smirch, degrade and coarsen,
Terrible things they do
To quiet, elderly women—
What would they do to you!

If you've a boyish fancy
For any measure or man,
Tell me, and I'll tell Father,
He'll vote for it, if he can.
He casts my vote, and Louisa's,
And Sarah, and dear Aunt Clo;
Wouldn't you let him vote for you?
Father, who loves you so?

I've guarded you always, Willie,
Body and soul from harm;
I'll guard your faith and honor,
Your innocence and charm
From the polls and their evil spirits,
Politics, rum and pelf;
Do you think I'd send my only son
Where I would not go myself?

Our Own Twelve Anti-suffragist Reasons
by Alice Duer Miller

1. Because no woman will leave her domestic duties to vote.

2. Because no woman who may vote will attend to her domestic duties.

3. Because it will make dissension between husband and wife.

4. Because every woman will vote as her husband tells her to.

5. Because bad women will corrupt politics.

6. Because bad politics will corrupt women.

7. Because women have no power of organization.

8. Because women will form a solid party and outvote men.

9. Because men and women are so different that they must stick to different duties.

10. Because men and women are so much alike that men, with one vote each, can represent their own views and ours too.

11. Because women cannot use force.

12. Because the militants did use force.

Fourteen of Washington, DC’s iconic institutions and organizations are coming together March 1-3, 2013 to provide various exhibits, special programs, performances, and events to mark the 100th anniversary of the 1913 Woman Suffrage Procession­ a.k.a. Women’s Suffrage Parade.

Planned in only 60 days, the 1913 suffrage parade was scheduled strategically to steal the crowd as President-Elect Woodrow Wilson arrived at Union Station for his inauguration the next day. There were almost half a million-parade spectators, many not friendly to the suffrage cause. Violence that erupted led to many serious injuries and over a hundred women being hospitalized.

One hundred years to the day later, on Sunday March 3, 2013, come at 9:30 a.m. to join or watch the Centennial Suffrage March down Pennsylvania Avenue led by Delta Sigma Theta. They will be joined by thousands of women representing organizations from across the country as they honor Delta’s 22 founders and all women who marched in the 1913 parade. The service sorority is also marking its centennial in 2013. Tens of thousands of women are expected.

Throughout the three days, dozens of special events will take place at various venues around Washington, DC to share the story of a movement that started in 1848 but captured the nation’s attention in 1913 with the Women’s Suffrage Parade. This event triggered a shift in strategy to gain a constitutional amendment, which culminated in 1920 with passage of the 19th Amendment, which enfranchised over half of America’s citizens.

Complete details for all participating institutions and organizations; exhibits, special programs, and events came be found at www.suffrage-centennial.org.

from the Introduction of "Are Women People?"
by Alice Duer Miller 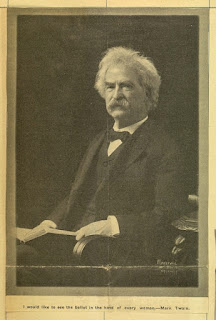 I would like to see the ballot in the hand of every woman.
Mark Twain, WOMAN'S JOURNAL, December 26, 1908. Photo from the LOC.

"Three bills known as the Thompson-Bewley cannery bills have been advanced to third reading in the Senate and Assembly at Albany. One permits the canners to work their employés seven days a week, a second allows them to work women after 9 p.m. and a third removes every restriction upon the hours of labor of women and minors."
—Zenas L. Potter, former chief cannery investigator for New York State Factory Investigating Commission.

Let us not to an unrestricted day
Impediments admit. Work is not work
To our employés, but a merry play;
They do not ask the law's excuse to shirk.
Ah, no, the canning season is at hand,
When summer scents are on the air distilled,
When golden fruits are ripening in the land,
And silvery tins are gaping to be filled.
Now to the cannery with jocund mien
Before the dawn come women, girls and boys,
Whose weekly hours (a hundred and nineteen)
Seem all too short for their industrious joys.
If this be error and be proved, alas
The Thompson-Bewley bills may fail to pass!

Great post, Tabatha. Thank you for sharing so much information about this important anniversary. Alice Duer Miller's poem -- I loved the use of irony. She seems like a master satirist.

Tabatha - so much time and thought and wit and wisdom put into this post! Thanks for sharing/reminding. And who would have believed that the right of a citizen to cast a vote in this country would still be a hot topic in 2012/13... ?! Thanks again.

Fabulous post, Tabatha. Enjoyed all the poems and the reminder about a privilege we should never take for granted. It's hard to fathom how things once were and how far we've come. Had never seen Miller's poetry before. Wow.

Terrific post. Thanks so much for introducing me to Alice Duer Miller and her wonderful wit. (And reminding me of how lucky I was to have been born at the right time and the right place!)

Wow, Tabatha! You have me counting my blessings and scratching my head in amazement that this was only 100 years ago! Anna Howard Shaw's quote is priceless. =)

Thank you for this thoughtfully put together post, Tabatha...and for introducing me to this poet. We'll be studying the suffragette movement soon, and I know my students will enjoy reading and learning about the movement through the ideas you've shared here.

Thank you for sharing this fascinating snippet of history.

I wish there were people producing such wonderfully sarcastic sonnets about today's important bills.

Thanks for all of the links Tabatha, & the poems. She was amazing, wasn't she? I love the poem about the legislature and her ironic look at the situation. I have studied much of this before with students & we have traveled to Cheyenne, Wyoming to see a stature of the person called the "mother" of suffrage, Esther Hobart Morris. Wyoming is the first state to give the vote to women. Great post; we are fortunate women today & should remember that it hasn't been too long ago that all this happened!

Thanks for the history and the poems, Tabatha. This post took awhile to put together, I am sure! Alice Duer Miller's poem reminds me that sometimes the most effective "argument" is satire, rather than simply volume. :)

Wow, these are amazing.

Just amazing, how people once struggled for the right to vote and how abyssmal voter turnout percentages are in most elections. Thank you for sharing these terrific resources!