Marek Gibney has created a site called Music-Map which will give you suggestions for bands/composers you might like based on bands/composers you already like. The site says, "The closer two artists are, the greater the probability people will like both artists."

Here's a bit of a map using The Beatles: 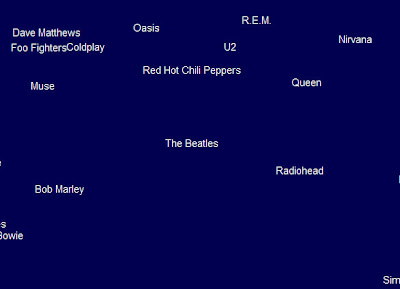 Here's another example using Beethoven (click to see it larger):

Oddly enough, Britney Spears is on the Beethoven map. ?

Here's a video for Beethoven/Hubble fans:

Interesting! I am so amazed at the Hubble photos, every time. They are mesmerizing. My brother is a musician, so will send this about the maps off to him too. And will play with it later when I have time. Thanks, Tabatha.

The Beethoven/Hubble video was wonderful. Being a SciFi fan, I kept seeing all kinds of aliens and starships and mysterious worlds. A great ride.

The music maps were very interesting. The Beatles one I could see a lot of the connections. But the Beethoven one really threw me until I realized that it wasn't Copland (as in Aaron) but Copeland (as in the Indie rock band) next to Madonna. Whew ;-)

Even odder than Britney Spears on Beethoven's map: Robert Pattinson on Florence and the Machine's map! Did I miss a hidden talent of his somehow?

What an engrossing way to spend the evening. Thanks for sharing it!