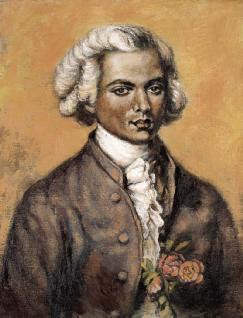 Have you heard of Joseph de Bologne, the chevalier de Saint-George?

Born in the 1700s to a French gentleman and a Senegalese slave, Joseph de Bologne (a.k.a. Saint-George) could have been a slave himself. Instead, his father made sure Joseph was allowed to develop his gifts – and what gifts he had! American president John Adams described him as the “most accomplished man in Europe in Riding, Running, Shooting, Fencing, Dancing, Music.” Was there anything Saint-George couldn’t do?

Joseph's story captured my interest and I wrote fifteen poems about his life, from the point-of-view of his real-life friend, Antoine de Boëssière. Joseph de Bologne lived with Antoine de Boëssière when Joseph was attending Antoine’s father’s fencing academy and they remained friends their whole lives.

Here is the first poem from the Saint-George series:

Mon père put this journal in one hand
And a foil in the other. You understand
He is the greatest fencing master I can
Imagine; I am a grateful son.

I am a fortunate son as well,
To learn with a boy like Joseph; I tell
Ma mère every day that I excel
More, pushed higher by what he has done.

Higher than I could go with another –
Any other – you might think this brother
Of my heart makes me boast like a mother,
But I make no exaggeration.

His talent for everything he tries defies
The expectations of all Paris, belies
The beliefs that dark skin is like dark skies
When he is bright and warm as the sun.

Joseph hails from the Americas, a hot isle
Where his wealthy French father smiled
Upon finding beauty and gentle style
In the Senegalese slave known as Nanon.

Together they came to Paris, where George
Intended his son’s future would be forged
By his education, propelling him toward
A noble life – someone whom no one could shun.

I always include a little glossary with the poems (père – father, mère – mother, George – Joseph’s father). The rest of the series discusses Joseph's fencing, various duels, romances, musical career, and the Revolution, among other things. You can hear one of his compositions here:


Thanks for letting me share my Joseph de Bologne fascination with you!

Today's Poetry Friday round-up is being hosted by Laura at Writing the World for Kids.

Hi, Tabatha. I'm so excited that you are starting to share this series online. What a fascinating relationship the two boys had.

Thanks for sharing this! I especially love the internal rhymes and the repeated sounds. It feels bursting with wonderful words!

I always learn something new when I read your blog! What an interesting man - and what a unique cycle of poems.

How did you first hear about Joseph? You certainly picked an interesting person to write a series about -- I can see how his versatility could inspire different poetic forms as well as subjects to focus on. Enjoyed your poem and hearing some of his music! And yes, I feel smarter now :).

Indeed, always something I never knew here, Tabatha. One bit that's missing is where Saint-George was actually born, and I wonder what the American establishment (or the Parisian establishment) made of his parentage? Was there anyone who publicly considered him to be a lesser man?

I should know, but is the poem a defined form, or something you created? It works well with subject matter.

Thanks for sharing your thoughts, all! Heidi, Saint-George was born in Guadeloupe, which people thought of as "the Americas." I talk about racism he encountered in Paris in other poems. (I think he would have been much worse off had they stayed in Guadeloupe.) I came up with the form myself, although it is probably something that already existed!