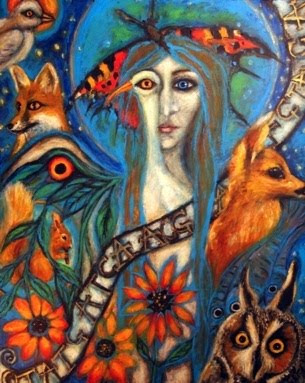 Gillian K. Ferguson wrote a poetic exploration of the mapping of the human genetic code. Really! It's called The Human Genome: Poems on the Book of Life (and it's a thousand pages long). The introduction alone is fascinating. Here are some samples of the poetry:

An excerpt from Blood Poems
by Gillian K. Ferguson

The heart is the house of blood,
whose rooms will never be full;

whose red chambers are never silent,
as the ear of a shell is never emptied

of the sea. Where experience never
triumphs over hope or faith in love.

Genes are the chemical ghosts of the dead
by Gillian K. Ferguson

Genes are the chemical ghosts of the dead;
each of us bearing graveyard on graveyard,

back to primaeval swamp. No wonder
these strange senses - being stared at -

intuition, supersition; the supernatural
surviving through the ages of atheism,

electric light, science, such long ages as humans.
Even when there is no need, our genes remember;

even in centuries of sleep, dreams, nightmares,
recorded over and over in irreducible grooves.

an excerpt from T. rex Genome
by Gillian K. Ferguson

ribbed like a small Gothic church,
death temple; black hole of his eye

in the drum of your mammal ear.
The King was Dead - Long Live

The King. Rudely hooked from time,
he is archived by his own skeleton -

dictionary found for his hieroglyphs.
And who will dare to read his page?

while i don't know that i could sit for 1000 pages of ANY subject in poetry, i have to admit these are fascinating snippets. i even feel a little sorry for the mighty t-rex "rudely hooked from time."

Wow, some really great poems. I love the subject matter.

I love this line: Even when there is no need, our genes remember;

This is fascinating. I can't imagine WRITING a thousand pages of poetry on one subject. At least he chose a large subject with lots of layers to explore.

I'll add in my WOW! The first two remind me of Annie Dillard -- the way he and she take something so ordinary and make it exceptional by looking at it from a hundred different angles.

Thanks for sharing these excerpts. Got a shiver from this line: "a sandy sound that echoes still"

Finally making the rounds...and happy to find out what "genetic" poetry is. I kept reading "generic" so I'm happy to see that Gillian's work is anything but...gosh, but I love content-rich poetry! And I appreciate that to process the entire human genome you'd need a thousand pages. I'll be on the lookout for more.