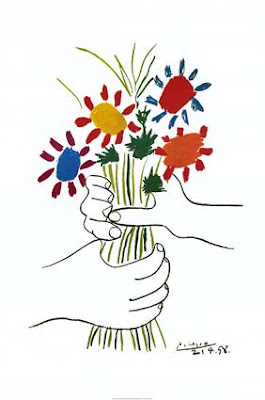 When I asked my mother what she wanted for Mother's Day this year, she asked for a poem.

I was surprised, but I'm game. The one I wrote for her was inspired by an entry in the Dictionary of Imaginary Places, so it's become part of my Directory of Imaginary Poems. The entry was “The Island of The Fay” based on a story by Edgar Allan Poe.

ON THE ISLAND OF THE FAY
by Tabatha Yeatts
for Ma

Whenever the Fay enter light or shade,
for them, it is the passing of a season.
Another summer passes with each swing into sunlight,
and they cross a winter as they fly through shadow.

As the first morning of May unveils itself,
the Fay make a journey –
they fly, smiling and breathless,
to a tree with bark like warm marble,
its leaves a feathery crown.

The Fay swirl around this chosen tree,
braiding the luscious ribbons
around its golden skin.
They reach notes
they didn't even know they could sing,
rejoicing.

As they bob around the tree,
slipping from light to dark,
and back again,
whole years go by.
Entire lives spent, dancing,
holding each moment
as a gift freshly unwrapped.

That's beautiful, Tabatha. I love the pasage of time via light and shadow in this fantasy poem, and the ribbons -- first-kiss pink! A lovely Mother's Day tribute to your mother. Happy Mother's Day to you, too!

Such a colorful second stanza! A great gift.

This is lovely, Tabatha. I love the lines "Entire lives spent, dancing,/
holding each moment".I'll bet your mom was delighted.

The best gift of all!!

"surprised-laughter orange" -- love that association. A wonderful poem and gift!

This brings together so many ideas, so many histories--I don't know the Poe story, but I enjoyed fitting together Fay/fae/fey/fai for May, and the May Day tradition, and the curious, exciting idea of seasons and years passing through shifts in sun and shade--just wonderful, "They reach notes/they didn't even know they could sing,/rejoicing."

Off to write something for my mom now...

Smart mom to request a poem from you!

Lucky mom to receive this poem!