"I rather think I shall soon be setting out on the upward journey."
~ Ludwig van Beethoven to Ferdinand Hiller, in the days before Beethoven's death 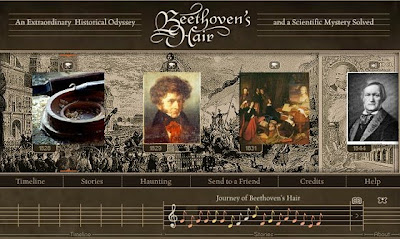 In 2000, Russell Martin's Beethoven's Hair: An Extraordinary Historical Odyssey and a Scientific Mystery Solved was published. It traces the travels of a lock of Beethoven's hair that a young fan (Ferdinand Hiller) cut as a memento after Beethoven's death.

The movie version, which was produced by Bullfrog Films, came out in 2005 and won a number of awards.

You can learn about Beethoven's hair here and you can actually see the lock itself at The Ira F. Brilliant Center for Beethoven Studies at San Jose State University.

* A map of the journey of Beethoven's lock of hair.
* More Beethoven-related posts from The Opposite of Indifference.
* Another Bullfrog Film about a composer: Ravel's Brain.

Lastly, a performance of a Beethoven composition:
Posted by Tabatha at 1:17 AM