I noticed in Time magazine that "A mural in Maine's Department of Labor building that depicted workers' history [was removed]; the governor said that he had received complaints about the painting's being too pro-labor." As I am not sure what the purpose of the Department of Labor is OTHER than to be "pro-labor" (to promote the welfare of working people), this leaves me baffled.* 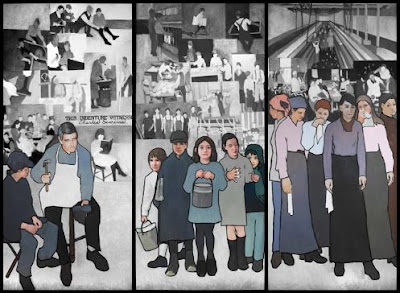 The Apprentice: Here, a Cobbler trains his young Apprentice. In the background are scenes from that era.

The Textile Workers: Young women were often sent to the mills by their families, who could not, or would not, support them. 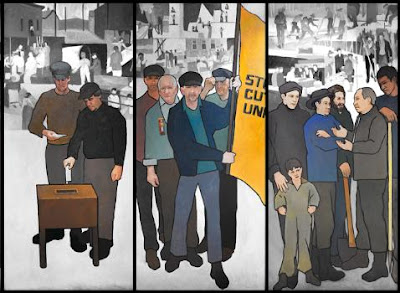 The Secret Ballot: For the first time, workers were allowed to vote anonymously in 1891.

First Labor's Day: In 1884, Maine celebrated its first "Labor's Day," a day for the workers to celebrate.

The Woods Workers: A member of the IWW or "Wobblies" tries to organize the Maine woodsmen. 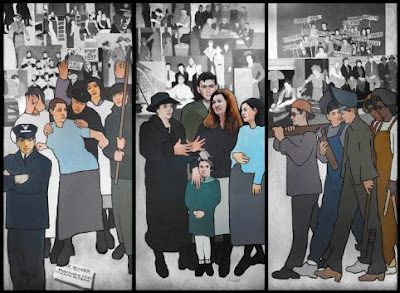 The 1937 Strike: Scenes from an unsuccessful strike attempt to create better conditions for women workers. 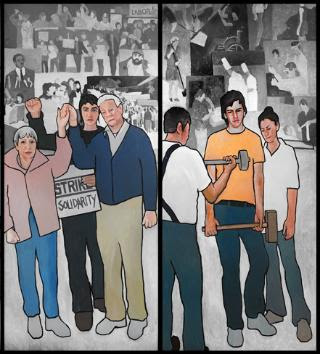 The Strike of 1986: The International Paper strike in Jay, Maine. One that still divides the town.

The Future of Labor in Maine: A figure from the past offers a hammer to workers of the present, who are unsure of its value in a changing world.

* Here's the U.S. Department of Labor's mission statement: "The purpose of the Department of Labor (DOL) is to foster, promote, and develop the welfare of the wage earners, job seekers, and retirees of the United States; improve working conditions; advance opportunities for profitable employment; and assure work-related benefits and rights."

Seems like their labor department is becoming an instrument of controlling labor rather than being an advocate for labor.

That is a wonderful mural. Terribly upsetting that it was removed.