Hearing The Music In Your Mind

We're running with my train of thought for this Music Monday. Hope you don't mind!

It begins with Caroline Yale, who doesn't actually have anything to do with music... I have been contributing to Apprentice Shop Books' Notable American Women Series. The series spotlights 25 women from each state. I researched deaf education pioneer Caroline Yale (Vermont), and that sent me off on this little rabbit trail.

During my Yale research travels, I ran across the name of Nobel prizewinning deaf scientist Charles Jules Henri Nicolle, who discovered that body lice were carriers of typhus. I'd like to write about him, but I haven't had time to do the research yet.

While I was making note of Nicolle, I thought of a book I wanted to read to my second grade tutee. It's by Jonah Winter (writer) and Barry Blitt (illustrator) about the world's most famous deaf composer: 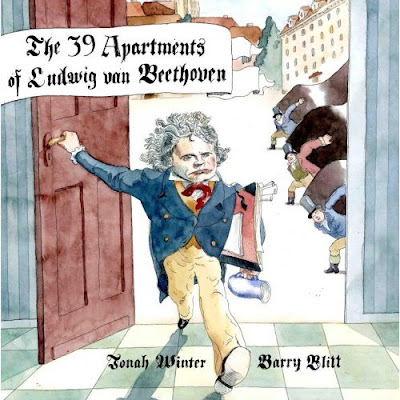 Which brought me to another composer who lost his hearing -- Bedřich Smetana. He composed the Vltava (video below) shortly after he became deaf. The piece is part of a set of six symphonic poems. He explains:

The composition describes the course of the Vltava [River], starting from the two small springs, the Cold and Warm Vltava, to the unification of both streams into a single current, the course of the Vltava through woods and meadows, through landscapes where a farmer's wedding is celebrated, the round dance of the mermaids in the night's moonshine: on the nearby rocks loom proud castles, palaces and ruins aloft. The Vltava swirls into the St John's Rapids; then it widens and flows toward Prague, past the Vyšehrad, and then majestically vanishes into the distance, ending at the Labe.

Over the years, I have been impressed with Czech musicianship. Play this loudly and you'll hear what I mean -- they are flawless:

* A Mental Floss post about five deaf composers (including Smetana).
* Jazz singer Mandy Harvey lost her hearing during her freshman year at university, but she's still singing.
* Deaf percussionist Evelyn Glennie.
* Free musical scores for Vltava.
* I think I got the "rabbit trail" terminology from Lissa.

You and I share the same rabbit tracking tendencies!

Thanks, Tabatha! I, too, love Czech muscianship! I am playing your link (loudly) while working on my new post about the Forms of Poetry at HOW TO WRITE A POEM Blog