For Art Thursday, we have St Brigid since it was Brigid's Day on February 1st. Brigid is a bit confusing because it seems like the saint and the goddess are a bit entertwined and the goddess has three parts or is three sisters, and I'm not sure what's what. I'm not even sure how to spell her name, as it can be spelled Bride, Bridie, Bridhe, Bridget, Brighde, Brigid, Brighid, Brigit, Breda, Bree, and Breeshey.

From Brighid, Goddess and Saint: "Brian Wright lists the qualities of [the goddess] Brigid's parents that she inherited. From Dagda: magic, healing, knowledge, producing an abundance of food, control of the weather and environment, fire. From Morrigan: fertility, foretelling the future, animal husbandry, association with fire, protection of her people." She's a poetess, a smith, a physician ("woman of leechcraft").

There don't seem to be many surviving artworks of the goddess, so I have a few stained glass images honoring the saint. I like this quote about her (the saint):

Dubthach (Brigid's father) is portrayed as having been so annoyed with Brigid that he took her in a chariot to the King of Leinster to sell her. While Dubthach was talking to the king, Brigid gave away Dubthach's bejeweled sword to a beggar to barter it for food to feed his family. The king recognized her holiness and convinced Dubthach to grant his daughter freedom. 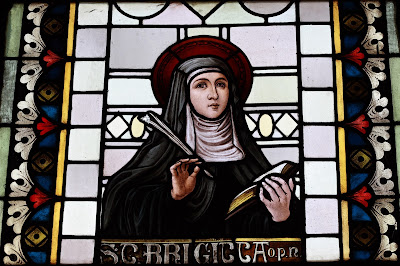 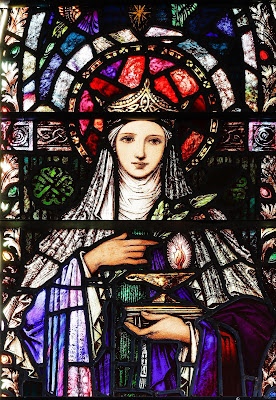 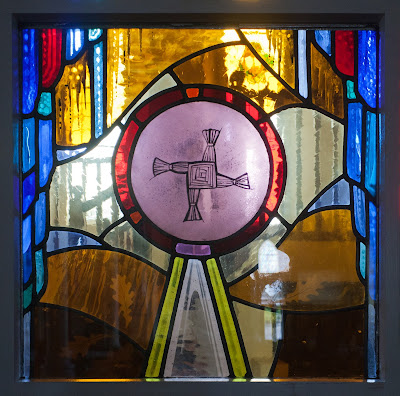 St. Brigid has been a fascination of mine over the years for namesake reasons...ahem. The only qualities I think I share with her (though the fact that they come only via her parents is a bit much) are "producing an abundance of food" - in my case, baked goods and "protection of her people" - just ask my girls! I like that she is a poetess. :)

Wonderful stained glass windows...and thanks for the info about Brigid.