Patience is the art of concealing your impatience.
~Guy Kawasaki

My heart has been full of the news from Texas this week. Ugh.

My parents got their first COVID-19 vaccination shots Monday -- such a relief. It feels like the pandemic is wrapping up on the one hand, but on the other, we have to keep hanging on a while longer. The expression on Saint Rosalie's face in this painting! Maybe that's how Van Dyck felt, quarantined in Palermo. 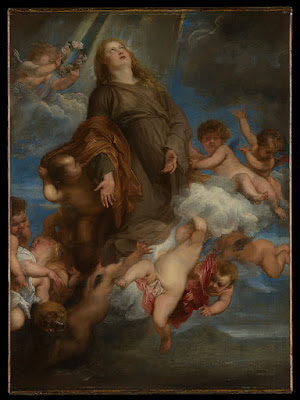 Van Dyck was in Palermo, Sicily, when a plague broke out and the city was quarantined. In their despair, residents prayed to the city’s patroness, Saint Rosalie, whose long-lost remains (she died about 1160) were rediscovered in the midst of the epidemic. [The Met]

after “Saint Rosalie Interceding for the Plague-stricken of Palermo,” by Anthony van Dyck

St. Rosalie stares up at God like a mother skeptical
about his doings. Are you working? she calls,

having made her expectations clear: Relieve us
of this plague. No answer. Will she have to fuss?

Around her, putti clamor, all those bored children
stuck at home now that the schools have been

closed. One holds a skull, dug up from the family
crypt or the back garden. Rosalie feels a hum

One more poem, sweetly ordinary: Against Endings by Dorianne Laux

There is no such thing as a God-forsaken town has the Poetry Friday round-up. Thanks, Ruth!

"Are you working?" Exactly! And I love the musical language in Dorianne's poem, too. For vaccine, we're still at 65 and older in our county. Gonna be a while yet. xo

These lines! as porch lights go out – not wanting it to stop –

and Mars rising over the flower shop, up
through the telephone wires"
These refer to the William Dickey poem that I used as a reference point for the landing of Perseverance on Mars. Love it!
I saw a story this morning about a surge in available doses coming. I hope, I hope, I hope.

I can relate to Rosalie and those residents in the village she looks over. That child with the skull!
We are still 65 and up here, so it will be awhile. I am grateful our parents have all had at least one shot and some have had two.

What a great painting and poem -- Rosalie's expression says it all! Does history repeat itself or what? Thanks for the Laux poem too :).

Oh, that is brilliant! Wonderful! Thank you.

I think I need to send this poem to my daughter. I visited for a little bit today & the girls were in another room, after school (they are sometimes "in" school now) & having rushed them home, my daughter jumped on her computer for a meeting with her staff & the girls & I sneaked upstairs for a visit. They are used to the routine, but it, even after a year, is still, well, different! "Are you working? she calls," - poor mother(s) & dads everywhere. The 2nd poem I'll keep to look at again. I love poems that focus on the every day, as you wrote "sweetly ordinary". Thanks, Tabatha! Wishing you a nice weekend!

I laughed out loud at St. Rosalie. I can totally relate! Isn't it crazy how the more we are different, the more we are the same? And the repetition of history. When will we learn?

Saint Rosalie's face is ALL of us! Ha! Thanks for the artistic and poetic gems, Tabatha! :)

The painting and poem are both exquisite and so relatable to right now. The Laux poem was timely in that there has been so much talk of Mars and the universe. Thanks for posting these amazing works.

Oh, St. Rosalie, intercede a little harder now, apply the taut strictness of a Catholic school nun--or are you too weary yourself? I am not against some endings, not all permits of the poet apply in this situation! Thank you for such applicable poems, Tabatha!