Beauty Mark and the Round-Up!

I have a treat for you...we have a guest post by Carole Boston Weatherford! Carole tells us about her new verse novel called Beauty Mark. My list of "comfort movies" includes "Some Like It Hot," which also happens to be Carole's favorite Marilyn movie. Read on to find out more! 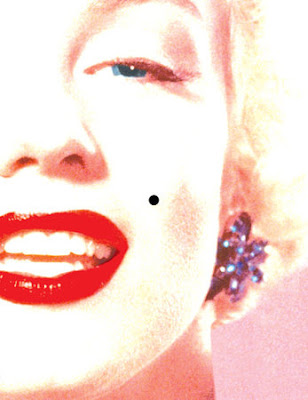 Why Marilyn Monroe?
After spanning the Harlem Renaissance and World War II in verse novels about Billie Holiday and the Tuskegee Airmen, I had arrived at mid-century. In search of my next subject, I saw college students rocking Marilyn Monroe gear as the #MeToo movement rocked Hollywood. The irony made me wonder how much young adults knew about the pop culture icon, why her star never dimmed and how her story speaks to our times.

Why YA?
Teens will identify with Marilyn’s struggles: self-doubt, family dysfunction, economic hardship, mental illness, substance abuse, gender fluidity, and sexual abuse and harassment. Teens will also connect with her style, body confidence and search for herself.

Why a verse novel?
A poet, Marilyn probed her anxieties through verse. From foster care to fame—her life was a poem as dramatic as any movie.

What was your research/creative process?
[Note from Tabatha: Carole has a wonderful video that I couldn't insert but you can visit here]

I read biographies of Marilyn—ones that were narrative and others that collected her mementoes. I approached her story chronologically, consulting various references about the same chapter of her life. Then, I crafted first-person poems to recreate each scene and to evoke her emotions.

What is the book’s premise?
A few months before her death, Marilyn is backstage at Madison Square Garden being sewn into her gown to sing “Happy Birthday” to President John Kennedy. During the lengthy styling, Marilyn reflects on her troubled life and unlikely rise to a Hollywood legend. I grab readers with the first line: “I am nude. . .” 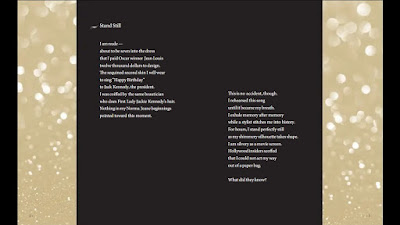 What will surprise readers?
Marilyn sympathized with the civil rights struggle and used her star status to be an ally. For example, she helped her fan crush, singer Ella Fitzgerald, secure a gig at the Mocambo, a Los Angeles nightclub. The club’s owner had declined Fitzgerald due to her race, weight and jazz bent. He booked her, though, after Marilyn agreed to sit at the front table every night of the engagement.

Though typecast as a blonde bombshell, Marilyn was much more: a painter, gardener, avid reader (despite dyslexia), and the brains behind her brand. Bold and ambitious, she was the first woman since the silent film era to start a production company.

Marilyn was perhaps the original influencer. Although she died in 1962, official Marilyn Monroe sites have garnered 14 million Facebook likes and 244,000 Twitter and 1.7 million Instagram followers. Not to mention the countless international fan sites.

What surprised you?
Marilyn owned 430 books, including some that are also in my collection. I devoted a poem in Beauty Mark to her personal library.

What are your personal Marilyn Monroe favorites?
Reference- Marilyn, a massive book from the 2012 Ferragamo Museum exhibition
Photo-Milton Greene’s shot of her in a tutu
Film-Some Like It Hot
Song-“I’m Gonna File My Claim” from River of No Return
Outfit-The white off-shoulder dress she wears on the 1952 Life cover.
Quotation-"A wise girl knows her limits, a smart girl knows that she has none."
Poem in Beauty Mark-“Who is Marilyn Monroe.”

Thank you, Carole, for sharing your compelling new verse novel with us!

oooooooh! I wondered what the inspiration was behind this book. I admit that I know next to nothing about this pop icon. So, this book is a great way for me to learn. And, I'm a big fan of Carole Boston Weatherford....so it will be a delightful read for me. I'm off to request it from my local library. Thanks so much for this post, Tabatha! This week, the swagger are challenged to write a Duplex!

I have an oops-doodle inspired poem today, a nonet about an oops-topus -- I mean, octopus.

This sounds fabulous - an iconic life in able hands. Thanks for the interview, Tabatha, and for the book, Carole!

What a fascinating insight your interview reveals Tabatha. The gulf that often exists between the public persona and the private reality. Thank you for hosting and thank you also for this Marilyn moment of greater clarity and understanding.

I'm intrigued by Carole's book, she's definitely caught my attention! I've been a fan of Marilyn Monroe, partly because of who she actually was beneath and before all the stardom. Thanks for sharing "Stand Still" Tabatha, Carole's captured Marilyn's voice in this poem–and I especially like her closing lines. Wonderful post, and thanks also for hosting this week!

Thanks for hosting! I hope October treats everyone well!

I'm pretty sure Marilyn is an original "complex subject"--I loved the taste of her secret life revealed here and I look forward to getting the whole story. Thank you for connecting us directly to Carole and her new work, Tabatha.

Thanks for hosting, Tabatha - and thanks for sharing the book news! Knowing Carole, it's going to be a fantastic book, thoughtful, witty, and respectful of its subject.

(FYI, my link doesn't go live til just after midnight!)

I love reading this interview of Carole and about her new book, Tabatha. I am old enough to remember seeing the news about her singing to President Kennedy & I've read Vivian Kirkfield's book about Marilyn and Ella's friendship. Carole, your journey to know Marilyn sounds so long and deep and fascinating. I enjoyed all those favorites and can't wait to read Beauty Mark! Thanks!

Friday keeps arriving - and I'm not organised with a post. But I'm so glad I popped in and spied this. Loving Carole's passion for her project. A fascinating read - and a book to look out for. (I have just had to google this dress she was stitched into. No wonder it fits like a glove!)

My fingers are twitching to get a short post together, and join the roundup. If it happens, I'll drop a link. xx

Misunderstood, for sure! I had no idea. This little sneak peek has me intrigued about what other surprises are in store. Well done, Carole! I look forward to reading BEAUTY MARK.

PS. Thanks for the guest post and for hosting PF, T!

Oh, wow! Beauty Mark sounds fantastic. I had no idea any of this about Marilyn Monroe. I had the pleasure of hearing Carole Boston Weatherford speak at a conference a few years back. She is absolutely wonderful. I will definitely check this new verse novel out.

Holy Guacamole BEAUTY MARK sounds amazing. I had goosebumps when I read "Stand Still" - maybe an empathetic response? I truly look forward to this novel. MM has always fascinated me and Weatherford's portrayal appeals to me on many levels. Thank you for sharing this book this week and for hosting, Tabatha. :)

Wonderful post -- so enjoyed hearing from Carole about the new Marilyn book. I'm looking forward to learning more about this icon. I knew she was an avid reader, but didn't realize she was dyslexic. Thanks for hosting this week, Tabatha!

So many congratulations to Carole for this new Marilyn book! Who doesn't love complex characters and learning more about them? When I think of Marilyn I generally thing "sad" before anything else, so I especially excited to see how Carole's book changes and/or supports that idea! Thank you, Tab, for hosting! xo

Tabatha, this is an amazing review on an amazing author and a book so compelling! Thank you for the depth of detail shared here, and for hosting the Roundup today. You're such an encouragement and inspiration - your enthusiasm is contagious. :)

Thanks for hosting and for introducing me to this new book. It sounds fascinating and I'm looking forward to learning more about Marilyn.

That sounds so good! Thanks for hosting, Tabatha.

Thanks for hosting and featuring Carole-- whose work is always amazing! Can't wait to read BEAUTY MARK!

Thank you for the wonderful interview with Carole. I'm a huge fan of both Carole and Marilyn so I'm off to order this book right now!

M.M. was so dissed & locked into one trope by the public media through the years.
I think in the last decade, or perhaps earlier, feminists have reclaimed some of her great humanity.

This Verse Novel by exquisite poet CBW, who I admire, is high on my reading list.
More thanks for starting the weekend off wonderfully hopeful.

Marilyn was fascinating... I have read a little about her, but this new book in verse certainly grabs my attention. Thanks for sharing, and for hosting!

I learned so much from your guest post! I am both thrilled and saddened that I only knew of this icon's celebrity status, and nothing of the person she was! Needless to say, I am impressed and want to read more! Thanks for the "teaser" to this book; it sounds awesome! And, to Tabitha, thanks for hosting!

Carole is one of the best nonfiction verse writers. I love her books and look forward to this one. I know very little about Marilyn Monroe. The research and passion around this book is outstanding. Thanks!

What a great post! This book looks fascinating--already I'm realizing how much I didn't know about Marilyn Monroe. I'm definitely looking forward to checking this out. Thanks for sharing and for hosting this week.

This is intriguing and I look forward to reading Carole's latest book. Marilyn Monroe (Norma Jean) was a woman who captivated the time she was alive and famous and I was a somewhat young person then. I look forward to reading more about this. The poem you shared really brings it back to me. I have read a lot about her. It is and was sad to see what happened to her and I don't think we know all of it. Janet Clare F.

This book on Marilyn sounds amazing. Some like it hot is one of my favorite movies--and definitely my favorite movie of hers. But just from reading this post, I learned some new things about her. I can't wait to read this new book!
Oh, and thanks for hosting this week, too!!

Carole's verse novel about Marilyn Monroe sounds amazing! It's so important for young people to realize there is more to a person than the persona the media presents. Thank you for sharing your space to let Carole tell us about it herself, and for hosting the roundup this week!

Tabatha, I read through your post and followed links. Thank you for the interview on a book that looks so interesting. I enjoyed Carole's video and have always been fascinated by Marilyn Monroe. Thank you for hosting and bringing us an interview that shares information about the iconic figure, some of which I did not know. "her life was a poem as dramatic as any movie."

Who knew? But I guess that's the point. I just reserved this book at the library and I can't wait to have all my preconceived notions and stereotypes shattered even more than this post did!

Thank you for featuring Carole and her book, and for hosting the roundup!

Carole's work is always so thoughtful! Thanks for introducing us to this new work. Off to put it on reserve!

Thank you for hosting today. I really enjoyed reading the post. I am looking forward to reading Carole's book.