Out with the old

The computing field is always in need of new cliches.
~Alan Perlis 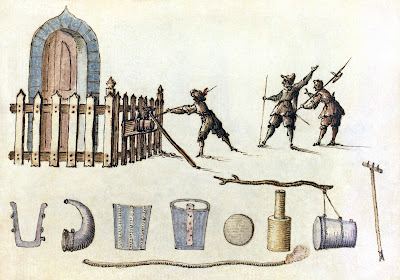 a sketch of a petard, such as one might get hoist by
which is an expression I like & don't want to replace, tbh

A rambling discussion of how my brain works awaits you. (I would bail now!) When I was growing up, I read a lot of British books. Between that and my father's extensive vocabulary, I ended up with kind of a weird lexicon for an American kid. What I wanted to talk about today, though, was how my grandfather's sayings stuck. I must have heard them at an early or impressionable age because they are wedged in tight.

This morning I found myself being glad that, although it was raining, it wasn't as hard as a cow p*ssing on a flat rock, and I thought, "Darn you, Granddaddy!"

His expressions at mealtime come to mind when I've eaten a lot. His "I'm fit to pop" is fine, but "I'm full as a tick" admittedly has an element of "ugh."

The saying that I've particularly tried to get rid of is "cold as a witch's titty." Did that get passed down from colonial Puritans? What the heck? I have tried to replace it with "cold as a polar bear's nose" with some success.

How does this relate to Poetry Friday? We're always looking for fresh comparisons.

Matthew Baldwin collected new expressions for a "Cliche Rotation Project." Some of my favorites were:

Replace "It's a win-win situation" with "Everyone gets ice cream!"
Replace "We'll cross that bridge when we come to it" with "We'll chop that tomato when the salsa runs out."
Replace "Reinvent the wheel" with "Start a whole new batch of sourdough."

(Apparently I particularly like the food ones.)
(None of the list were for expressions my grandfather used.)

The Morning News did a Non-Expert’s Contest for Total Idioms to come up with original idioms. The winner was "If A Bird Can't Fly, It Walks," meaning that there's no real excuse not to do what you can.

The Poetry Object has exercise worksheets for Overcoming Clichés and Using Specific Imagery that look helpful for teachers and others.

I have to include a poem! Here's one by Mac Hammond that takes a fresh look at an old subject:

Once upon a Time There Was a Man
by Mac Hammond

Once upon a time there was, there was a man
Who lived inside me wearing this cold armour,
The kind of knight of whom the ladies could be proud
And send with favours through unlikely forests
To fight infidels and other knights and ordinary dragons.
Once upon a time he galloped over deep green moats...

Elizabeth Steinglass has the Poetry Friday round-up today. Thanks, Liz!

Ugh. Having popped some ticks in my time, that definitely does carry stronger imagery. I did like your foodie favourites for alternate cliches. And I had a quiet chuckle about that giant...

Totally unrelated... Somewhere during the busyness of recent months, I missed your latest poetry swap sign-up. Ah well... Next year!🙂

Your grandfather's lines are bringing me laughter this morning, Tabatha. Thank you for the gift of starting my day with this joy.

I love this idea of replacing old sayings. My mom spoke in malapropisms and I managed to pick up quite a few of them which I now find myself repeating!

Dear Tab - this work is important not just for stamping out cliches but for overcoming racial (and other) bias. I've just recently become aware of some phrases I use that may be offensive to native Americans.. like "hold down the fort" and "circle the wagons." We can do better! xo

I have not brought those words from the past with me, but one grandfather was so superstitious that I can't stop that part, like today is Friday, the 13th, must hunker down and beware what might happen today, or no walking under ladders, not that I often see ladders that could be walked under, ha! Now you have me wondering if I do say things I don't even notice. I'll be watching, Tabatha, for "that man who lived inside me"!

What a fun post chock full of pleasantries. Of course I enjoyed hearing your grandfather's expressions -- I hadn't heard the "witch's titty" till I was an adult. And what a fab idea to replace tired cliches with foodie equivalents. :) Thanks for sharing Hammond's poem too!

Tabatha, your Granddaddy sounds like a real character, a lovable one! I hope to remember this replacement for crossing bridges when we get to them -"We'll chop that tomato when the salsa runs out." Love it! Hammond's poem reminds me that there's a little bit of that knight in all of us.

I think our grandfathers must have known each other--at least they shared some of the same expressions.I like this idea of replacing old worn-out expressions with new ones. I hope "everyone gets ice cream" catches on!

The new cliche that made me smile the most was "Putting the “umption” before the ass." But I did like all the foodie ones!

I'm with Irene. A close look at the language we use can reveal some troubling biases.

Thanks for the teaching resources. I'll try them and report back!

Last, but not [mosquito larvae...a single grain of salt...no correct answers on the fraction quiz], thanks for the poem. Definitely a fresh look at an old subject!

Laughing hilariously because we use "As cold as a witch's tit!" LOL! We are fond of telling people not to get their "knickers in a twist" (upset) and my mom always said "I don't know if I'm blown up or stuffed!" when she was tired and not focusing. Thanks for this fun list, and I agree that your Grandaddy sound like a lot of fun!

Tabatha, we will never bail on your brain! :)

Thanks for the cliche-battling resources and I agree that we needn't give up being hoisted by our own petards. Well, maybe the action, but not the expression. :D

Oh, the things we pick up from the family lexicon! :)

Lots of ideas to ponder here, (that's instead of lots of food for thought) I say yes to keeping idioms fresh. I like the trail of thoughts you wove us this week Tabatha, and I especially like the poem and the new idiom, "If a bird can't fly it walks," great bumper sticker too, thanks!