Heirs of Truth and Pure Delight

I had a moment in the Library of Congress among the presidential papers. I opened a folder, and there was an envelope in it. The front of the envelope was facing the table, so I didn't know what was in it. I opened it and out spilled all this hair. I turned the envelope over and it says, 'Clipped from President Garfield's head on his deathbed.'
~Candice Millard

Continuing my old post reruns! I was inspired to share this one from 2013 because Kat Apel and I went to the Library of Congress while she was visiting in November. 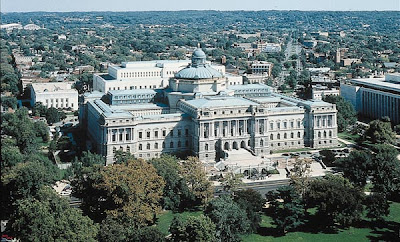 Today I'm spotlighting info from On These Walls: Inscriptions and Quotations in the Buildings of the Library of Congress about the Lyric Poetry corridor.

Above the window at the west end of the corridor is a banner with a quotation from William Wordsworth:

THE POETS, WHO ON EARTH HAVE MADE US HEIRS
OF TRUTH AND PURE DELIGHT BY HEAVENLY LAYS.

The ceiling of the corridor has the names of lyric poets in its mosaic. 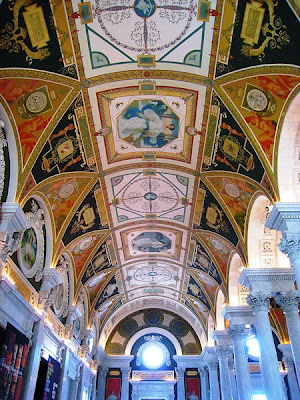 Six Americans are honored on the north side: LONGFELLOW, LOWELL, WHITTIER, BRYANT, WHITMAN, and POE. Poets honored on the south side are the Europeans HEINE, HUGO, MUSSET, BYRON, SHELLEY, and BROWNING. The names of ancient poets are inscribed in the center of the vault: THEOCRITUS, PINDAR, ANACREON, SAPPHO, CATULLUS, HORACE, PETRARCH, and RONSARD.

Henry Oliver Walker's mural Lyric Poetry--found at the east end of the corridor--provides the general theme. In it, Lyric Poetry stands with a lyre in the center. Around her are Mirth, Beauty, Passion, Pathos, Truth, and Devotion.

Alfred Tennyson's poem "Ganymede" is one of six poems depicted in paintings by Walker in the corridor. The most famous poet of the Victorian age, Tennyson is well-represented throughout the Jefferson Building; his name is in the ceiling of the Great Hall, and his poetry is also found in the Southwest Corridor on the first floor (The Greek Heroes) and the Great Hall's second floor North Corridor.

I have a poem by Tennyson today: "Love is and was my Lord and King"

Love is and was my Lord and King,
And in his presence I attend
To hear the tidings of my friend,
Which every hour his couriers bring.
Love is and was my King and Lord,
And will be, tho' as yet I keep
Within his court on earth, and sleep
Encompass'd by his faithful guard,
And hear at times a sentinel
Who moves about from place to place,
And whispers to the worlds of space,
In the deep night, that all is well. 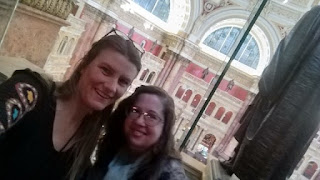 Michelle Kogan has the Poetry Friday round-up. Thanks, Michelle!

I love this post! I’ve been to LOC several times but not with a focus of finding poetry in the building. How fun! And, a lovely poem.

That ceiling is beyond gorgeous! We haven't been to DC in a while, but clearly we need to go back. Thanks for the Tennyson, which I did not know. Cheers! -- Christie

This is a place I've never been despite a number of DC trips. I must go back again. Love the Tennyson poem, all is well!

This is a great post! I haven't been to the LoC in a while and your post has reminded me of how much I enjoy it. Being so close (I'm in Baltimore), it is only an Accela ride away. Thanks for sharing!

Yes that ceiling in the Jefferson building is gorgeous, and one we didn't see when we were there last. I am glad to see at least one woman poet, Sappho (maybe I missed a few others…)–though I wish there were more, thanks Tabatha.

Clearly, I need to put the LOC on my to-do list! Looks like you and Kat had a great time. What monuments to poetry are we building now?

I've never been to the library of congress, but the lyric poetry corridor sounds amazing and looks beautiful! I want to go there.
And that little story about President Garfield's hair is amazing, too. Thanks for resharing this post.

Thanks for a peek into this gorgeous building and the poetry it contains. How wonderful that you and Kat visited together. I'm beginning to think that I'm overdue for a visit to DC. It's been many, many years. Also, I was utterly intrigued (and slightly repelled) by the story you shared about President Garfield's hair. Happy New Year!