...One of the most vital things we can teach our children is how to be storytellers. How to tell stories that are rigorously, insistently, beautifully true. And how to believe them.
~Melanie Tem

Poems by Uyghur poets for Poetry Friday. I've included a bit about the situation in China for Uyghurs down below. Today, the The European Parliament awarded its 2019 Sakharov Prize to Ilham Tohti, a jailed advocate for China’s Uyghur minority.

The first poem is by Abdushükür Muhemet from an article called ‘The night is thick’: Uyghur poets respond to the disappearance of their relatives by Darren Byler. [Muhemet] “first learned that his brother was taken to a Xinjiang “re-education” internment camp in March 2017. Since then he has lost contact with his family. He said: ‘Although I’m physically here in Sweden, my mind is always with them back at home. Sometimes I feel like my whole body is burning with longing. I miss my country, my relatives, my friends, and the hometown where I grow up.’” 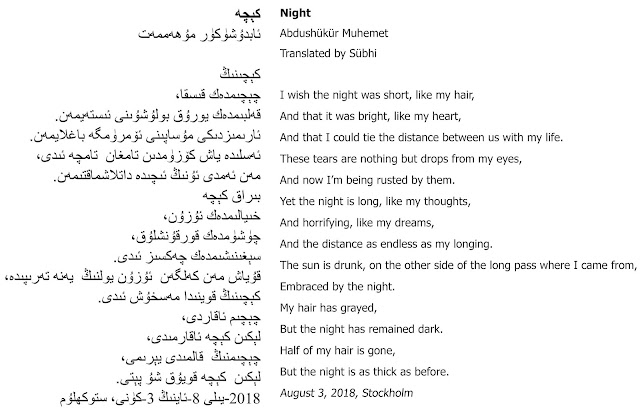 A poem from Words Without Borders by Uyghur poet Exmetjan Osman:

The Nights Passing Endlessly through Scheherazade’s Mouth
by Exmetjan Osman

A brief bit from Wikipedia about the current situation:

After Xi Jinping assumed the presidency in 2013, Uyghurs in Xinjiang suffer under a "fully-fledged police state" with extensive controls and restrictions upon their religious, cultural and social life. In Xinjiang, the Chinese government has expanded police surveillance to watch for signs of "religious extremism" that include owning books about Uyghurs, growing a beard, having a prayer rug, or quitting smoking or drinking. The government had also installed cameras in the homes of private citizens.

Further, at least 120,000 (and possibly over 1 million) Uyghurs are detained in mass detention camps, termed "re-education camps," aimed at changing the political thinking of detainees, their identities, and their religious beliefs. Some of these facilities keep prisoners detained around the clock, while others release their inmates at night to return home. The New York Times has reported inmates are required to "sing hymns praising the Chinese Communist Party and write 'self-criticism' essays," and that prisoners are also subjected to physical and verbal abuse by prison guards. Chinese officials are sometimes assigned to monitor the families of current inmates, and women have been detained due to actions by their sons or husbands.

Karen Edmisten has the Poetry Friday round-up. Thanks, Karen!

Thank for this poetry today. Have you read The Vine Basket by Josanne La Valley, It's about the Uyghurs. I loved it.

Inhumane acts of atrocity come to mind from reading the poems and postscript about the Chinese government and the detention camps at the end. I'm glad these poets are writing, I wish the government would change, Thanks Tabatha.

Such a collage of similes layering 'Night' - but I'm especially grabbed by that third line. Poetry gives voice to so many hurts and fears.

Tabatha, thank you for alerting us to this horrible plight of Uyghurs. The poetry shown is raw and filled with such emotion.

Not surprising how powerful these poems are. I found "Night" to be especially heartbreaking. Thank you for honoring these poets with your attention and introductions, Tabatha.

Thanks for helping to bring awareness about the Uyghurs. The poems are powerful and painful to read, and do make me think about the freedoms we take for granted in our country. Of course -- all the more poignant since our democracy is currently under attack . . .

Thanks for introducing me to the Uyghurs. These poems make my heart ache.

Such heartbreaking poignant poems, Tabatha. I hadn't heard of the Uyghurs before. Thank you for educating me.

How can such beauty come from such awfulness?

Rusted eyes, grayed hair, and the night is just as thick. Poignant.

Thank you for sharing these this week. I am in awe at the poets who can raise their voices in beauty and truth in the face of so much horror.

Thanks for shining a light on these poets, their words, and their plight.