I like this place and willingly could waste my time in it.
~William Shakespeare, As You Like It 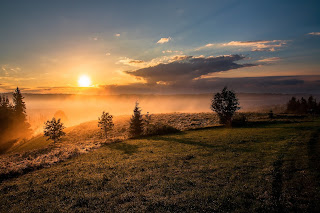 Sunray from clouds by Dawid Zawila

Two poems today. I shared another poem by 21-year-old British poet Hannah Hodgson yesterday. She wrote the below poem in 2017:

Our Oldest Relative
by Hannah Hodgson

If your mothers face fell
and her muscles couldn’t pick themselves up
you’d call an ambulance.

Another ice cap falls into the sea
like a cheek.
There are no sirens, no doctors, no A+E.

If your brother’s airway began to close
everyone would fight
to get him oxygen.

An interesting experiment (a Twitter poetry party) led to "At the Oasis, the Camel on Caravan." The first line seems like a good prompt, too.

At the Oasis, the Camel on Caravan
by @llbarkat, @TchrEric and @gyoung9751

Who were you in my dream?
The mermaid asked,
Herself the tears that feared to live.

I was the snow white hart, leaping from the touch.
I was the fish the mermaid shadowed.
I was the story in the burning book.
I was the fork, golden and shining.

I was a clearing
Ringed and shadowed
With evergreens.

Library Matters has the Poetry Friday round-up. Thanks, Cheriee!

Wow! That Hannah Hodgson poem! I wish I had written this bit from the At the Oasis, the Camel on Caravan poem

I was the morning
Mourning the night.

Thanks for the shout out about my hosting today.

I got caught up in the "I was" & then I ended up with one little part,"I was the fish the mermaid shadowed." I love the interesting use of the word 'shadow'. And I love the ending of poem one. Thanks, Tabatha

Hodgson sold me on these lines,
"You’ve known the earth
your entire life
so start treating it like family."
Here, here!

I love the mood and change in the second poem from the first, fun to have these two together. And yes it would make a great prompt:
"Who were you in my dream?" I also like the different sites you so often travel us too, thanks Tabatha!

Thanks for sharing these. Love Hannah's poem especially!

oh....my goodness. Oldest relative. It's so striking...honest and powerful. This is a young poet? So much wisdome.

Such an interesting poem duo you've shared today! I especially like the title and ending of Hannah Hodgson's poem. The second twitter poem fascinates me with its facile word play and imagery. It's as delightful and nimble as a mermaid slipping through the sea. I agree that the first line would be a wonderful prompt and think many others would as well. Thanks for sharing these today!

I love Hannah's poem--yes, it is time to treat our Earth as our dear relative and care for her. Thanks for sharing both of these. The first line of the second one may visit my dreams tonight--definitely an interesting prompt to ponder.

Hannah's poem holds so much truth...

Thanks for the comments, everybody! I don't know if anybody has looked at Hannah's site, but she is a poet you will want to root for.

Wow! A friend signposted me here after reading. Thank you so much for featuring me. I am staggered by the lovely comments! Had a bit of an emotional moment actually. Thank you x