He stepped down, trying not to look long at her, as if she were the sun, yet he saw her, like the sun, even without looking.
~Leo Tolstoy, Anna Karenina

I just love Laura Scott's "If I could write like Tolstoy." So rich in details! Before my younger daughter started reading War and Peace, she thought about writing some kind of [much shorter] contemporary version. After she was into it, though, she said it was perfect as it was. 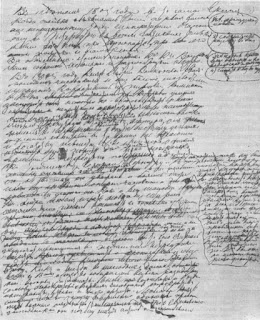 Ninth draft of the beginning of
Tolstoy's novel War and Peace

If I could write like Tolstoy
by Laura Scott ­­

you’d see a man
dying in a field with a flagstaff still in his hands.

I’d take you close until you saw the grass
blowing around his head, and his eyes

looking up at the white sky. I’d show you
a pale-faced Tsar on a horse under a tree,

breath from its nostrils, creases in gloved fingers
pulling at the reins, perhaps hoof marks in the mud

as he jumps the ditch at the end of the field.
I’d show you men walking down a road,

one of them shouting to the others to get off it.
You’d hear the ice crack as they slipped down the bank...

First, I thought about writing a poem about Emily Dickinson or Elizabeth Gaskell, but since it is October, I took a spooky turn with Edgar Allan Poe. [Warning: There are spoilers below, if you haven't read "The Masque of the Red Death."] 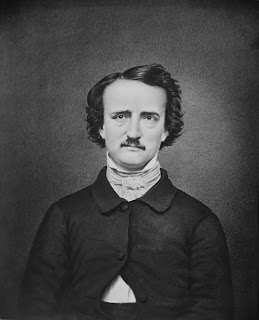 If I could write like Poe
by Tabatha Yeatts

you'd see a prince,
waving his mighty hand as he plans a grand seclusion.

You'd hear the pen nibs scratching busily as invitations are dashed
to a thousand healthy, jolly nobles, and in the distance

the grim sound of peasants falling, a mere half-hour
after the first sign of plague seizes them, and the faint drip

of the final exodus of blood leaking down their
stunned faces. I'd show you the supplies being stocked in the kitchen,

the bolts, ready to shut out the unpleasantries of the countryside,
the musicians, the actors, the dancers, swirling

through the doors to provide Beauty and Pleasure
during the long wait. You'd smell the tang of the wine as they

carouse one month, two, three, and on, safe from the
desperation of the forgotten folk outside

who cannot help but eye each other with suspicion.
Not here, though. You'd see that here, the only thing

that makes the partygoers nervous is the grandfather clock
at the end of the hall, the one in the room with black velvet

curtains and scarlet windows. You might even feel uneasy
about hearing that clock chime yourself, despite your cozy seat,

far from the locked abbey doors. I'd bring you with the prince
as he chases someone dressed as The Red Death, determined to punish

this fearsome killjoy. You won't mind if I let you go
into the last room alone, so you can watch the prince,

and then the nobles, struggling to pull off The Red Death's mask,
until they succumb
one by one.

Jama Rattigan has the Poetry Friday round-up. Thanks, Jama!

My first thought at seeing your link was....if I could write like Tabatha! You've got Poe, spot on. The madness, the goth, the pace. I love learning from you.

This is such a great idea...I'm thinking it would make a good writing assignment...

I loved the poem that you shared with those amazing ending lines: and look at how the moon turns half a row/of trees silver, leaves the other half black. There is a touch of intrigue in your Poe-ish poem, Tabatha: and the faint drip
of the final exodus of blood leaking down their
stunned faces.
Great job imitating Poe, the master of the macabre.

Wonderful! One day I'd like to take a workshop with you, T. Or maybe I can just learn from you... but in closer proximity. :)

Wow!! Brilliant poem, Tabatha. And yes, Poe was perfect for this time of year. Your ending sent a chill up my spine . . .

This is a perfect poem for this time of year Tabatha. I am not a fan of the gothic and creepy so I'm quite content to read your poem rather than the original.

I can see this: "You’d feel/the blood coming out of the back of someone’s head/warm for a moment, before it touched the snow."

The turn is your poem is powerful and spooky! "You won't mind if I let you go
into the last room alone..." all of a sudden the narrator has turned on us.

What a great idea for a challenge, and your Poepoem has all the required grimness and unease!

Terrific seasonal poem Tabatha. You drew me into the circle of blind followers, who eventually succumb too. I'd like to try a "If I could write like" poem, thanks!

Yes, this would make a fabulous prompt...and would inspire deep study of the craft of the author chosen!

(An aside -- I also got lost in the CymaScope post. Fascinating!)

What a great poetry prompt! Your poem is very Poe-like, and I loved it!

Wow! Your Poe poem is brilliant--perfectly spooky and macabre. I'd love to try one of these prompts. And when you host that workshop, sign me up!

Thanks for sharing your poem Tabatha! The Masque of the Red Death is a favorite of mine. I've used it to inspire many stories and scenes. Nice work!

Love both of these, and you and Poe would make quite a writing pair, Tabatha. Thanks for sharing.