Line 24 of the Kidlitosphere Progressive Poem is here!

That's what I love about songwriting - that you can write something about your own experiences and think it's completely specific to you, and then people can take away a completely different meaning for themselves. I really love that. I think you've been successful at writing a song when it has a larger life than yourself.
~Idina Menzel 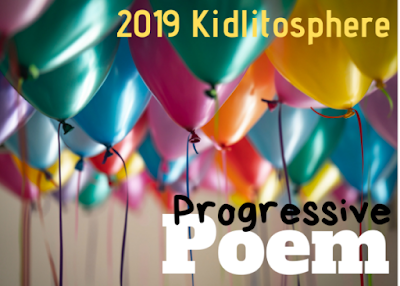 I know adding a line to Irene's Progressive Poem has been daunting for folks who don't know many lyrics. My head is stuffed full of lyrics, and I hoped that would help me out. As I go about my days, usually lyrics just pop into my head. Kind of a soundtrack that goes with whatever is going on. Like if "I Can't Go For That" by Hall and Oates starts playing in my head, I apparently don't want to do something. Sometimes I get a song stuck in my head that doesn't have anything to do with anything and it just hangs around. Or the last song I heard in the car will stay on repeat.

So, I've got lots of songs to draw from, but I was seriously cowed by trying to come up with the next line for the Progressive Poem. I thought about children's songs, Beatles songs that appeal to kids, I had the urge for specificity, for an action, but that's not where we're at. If I suddenly had Freddy going for spaghetti or put us in an octopus' garden, that would be jarring.

I told Ariana what line 23 was and she asked "Would flananas work?" which made me laugh (I had mentioned that I wished I could use a line from SteveSongs' tune about a guy named Joe, maker of a delicious banana pie whose secret ingredient is...flananas. I fear there's no room for banana pies, even ones made with flananas, in this poem.)

Just kidding, I probably didn't use that. Elena and I agreed that I would use whatever the next line was on the song on the radio. It was Ooooooooo, which goes with anything, don't you think?

Okay, if that wasn't going to work, maybe I should circle back to my original idea (that I told Matt after he gave us the first line): I saw a werewolf with a Chinese menu in his hand. I mean, werewolves go with stargazing, right? Who is more enthusiastic about night skies than them?

With that settled, I finally relaxed. I kid! No relaxing. I decided to cling to the stargazing line and do something related to that. Jamie Woon has a nice line: Feel that night air flowing through me, which kind of rhymes with "curiosity," but ultimately I decided to go with the Foo Fighters: Looking for a sign of life from "Learn to Fly."

Endless summer; I can see for miles…
Fun, fun, fun – and the whole world smiles.
No time for school- just time to play,
we swim the laughin’ sea each and every day.

You had only to rise, lean from your window,
the curtain opens on a portrait of today.
Kodachrome greens, dazzling blue,
it’s the chance of a lifetime,

make it last forever–ready? Set? Let’s Go!
Come, we’ll take a walk, the sun is shining down
Not a cloud in the sky, got the sun in my eyes
Tomorrow’s here. It’s called today.

Gonna get me a piece o’ the sky.
I wanna fly like an eagle, to the sea
and there’s a tiger in my veins Oh,
won’t you come with me waltzing the waves, diving the deep?

…we can be anyone we want to be…
There’s no stopping curiosity.
What’s so amazing that keeps us stargazing
Looking for a sign of life

Jan has it next! Good luck, buddy! (Feel free to use my leftover lines if you want. Oooooo goes with anything!)

Nice job! I think your kids would get along with mine!

Yes! I couldn't decide if this found in a song thing would be awesome for you or a hardship, given your library of lyrics in your head! love where you landed. Hugs to Elena too. Thank you! xo

Went out of town and just now jumping back in to comment (though I enjoyed traveling to each post in between to catch up) - great job, oh Goddess of Lyrics! Yay, Foo Fighters! :0)

I too wondered what you would do, Tabatha, since you know so many lyrics. This is just right for what's next, what 'he/she' is choosing for the summer days (and nights).

You would think someone like you with a constant hand on the heartbeat of music would know what needed to come next. It takes time, though, sitting and wondering, and searching high and low. You found it! We are still on the journey looking for a sign of life.

You had me believing in that werewolf... Love Looking for a sign of life (and perfect for spring!)

Love reading your thought process and shared thoughts with your kids. Since I do not have a library of lyrics, I've been relieved that I did not participate this year. Your line is perfectly aligned with the stars (or the sand or the sea). I can't wait to see how this wraps up over the next six days.

I was just so entertained by your thought process! (Maybe my fave ever?) Wonderful line to land on, thanks Tabatha and Elena.

Tabatha, I LOLed a few times reading this post, especially the werewolves. OVERCHOICE! And yet you figured it out, and "I can go for that, yes, yes; yes can do" -- "His hair was perfect."

Isn't she lovely (Sevie Wonder) speaking of the progression of this year's poem!

Buddy, dear Tabatha - appreciations for your found lyric line - I am not at all sure I did justice to it with my line today from Tina Turner, which I grabbed, just grabbed for what I saw was to be a lead-in for the wrap. I only realized this morning when I read your blog about 5:30 AM what the sources should be, which made it more fun just a few minutes ago. But I'm feeling guilty about not knowing in advance. Next year I will not be a turtle with my head pulled in, until my line.

Please thank your Family for playing along with such enthusiasm!

And more thanks to you for the hand-off.

So grateful to all the line-contributors & to Irene for her genius in jumpstarting this, way way back.

I love how you conversed and consulted on your found-line journey! You came up with the perfect line! It can lead several directions...heading over to see where Jan has taken us!

Tabatha, I am catching up on the PP. I found your family interactions on the poem's journey and song choice to be quite interesting. Thank you for the backstory and your line. It makes me wonder where the poem will go. We are looking up???

Hi Tabatha ! I did get to read this late last night. I loved hearing you describe how you have all the lyrics in your head. Somehow I used to have that ability to a degree, but not so much anymore. You have some fun ideas but I like your final choice! Way better than Ooooooooooooo. Finding signs of life while stargazing, where will that lead us? It would be fun to write some poems using borrowed lines from lyrics, like spine poems. And you could probably come up with a bunch at a fairly fast clip. Good ones too, I am betting. This is something I had never considered and I definitely enjoyed hunting around for the just right line, even though I was a nervous wreck I wouldn't pick one that would lead us forward somehow. Janet Clare F.

Loved reading your process on how you came to this line, which allows us to move toward the conclusion of our poem while keeping some energy and momentum. (and by the way, if you wanted to stick with Warren Zevon, you could have used the line, "Send lawyers, guns, and money."

Quite late in my response but so worth the trip to hear how you navigated over to the airways. I love your final destination, the video of the song takes the cake!