I wasn't sure what to do for Wellness Wednesday this week because I'm recovering from a virus and I'm a bit tired. Then I discovered that I had already drafted this post. Thanks, past-Tabatha!

Writer, poet, translator, and literary critic Anna Kamieńska was born in 1920 in Krasnystaw, Poland. During the Nazi occupation during World War II, she taught in underground village schools. I tried to figure out what years she wrote the notebooks "A Nest of Quiet" and "In That Great River," but I didn't see them listed anywhere. She died in 1986 and her husband died at the end of 1967, so between those two dates. 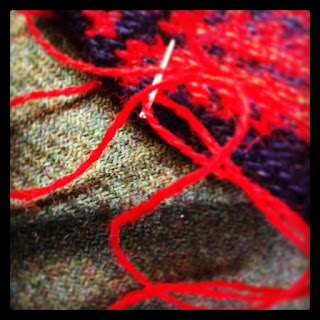 Anna Kamieńska
A Nest of Quiet : A Notebook

I’ve learned to value failed conversations, missed connections, confusions. What remains is what’s unsaid, what’s underneath. Understanding on another level of being.

I walk around disguised as an overweight old lady.

When I was little, I was always shocked when people said I was an orphan. Now I’m surprised when they call me a widow. He didn’t die, he grew so high alongside me that I can’t reach him.

In That Great River: A Notebook

Akhmatova. A thick volume of her collected poems, as if they were written by one person. But after all there were so many—from youth to old age.

Music teaches us the passing of time. It teaches the value of a moment by giving that moment value. And it passes. It’s not afraid to go.

The sense of loneliness is an error. We are and move in a great crowd of those who are now, were, and will be.
In that great river.

Collecting pebbles for a new mosaic of a world that I could love.

Much to ponder here! I have a feeling I could swim in those notebooks a good long time. Feel better soon, T!

Thank you so much for this introduction to a remarkable woman and poet!

Love! Thanks for linking me. My favorite part: "Darning holes in nothingness, scrubbing up the abyss, stitching painful opposites together."

Scrubbing up the abyss! How perfect is that?