Acceptance looks like a passive state, but in reality it brings something entirely new into this world.
~Eckhart Tolle

Sometimes you can watch a thought passing from one person to the next. In this case, Cort Johnson was influenced by an article about dealing with adversity by Zen teacher Norman Fischer (called ‘Life is Tough: Six Ways to Deal With It”) and her response moved me, so I am passing this along to you.

For Wellness Wednesday, thinking about turning things we can't avoid into our path. 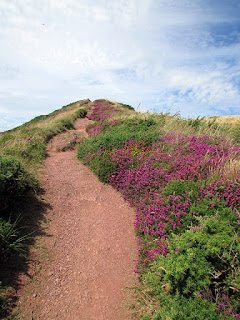 Fischer points out that our attempts to avoid difficulties don’t work because a) they happen – all the time, and sometimes really big difficulties happen, and trying to push them away actually makes them worse. ..Our frustration and anger derive not from the difficulty itself but from the ‘expectation’ we had that life would turn differently. When it didn’t we were left in an upset about what should have been...

Fischer notes that we very naturally gravitate towards positive experiences and shirk from negative ones. Even if a negative experience (such as chronic fatigue syndrome) hangs on around long enough so that we have to confront it, the best most of us do is hang on and cope. The idea of transforming something negative so that it actually ends up being enriching is kind of mind-boggling. For one thing, we really have no idea how to do that plus we probably have the sneaking suspicion that trying to transform it might just enable it to hang around longer. Far better, we think to just get rid of it and move on…But what if it’s not ready to move on?

That means we have to deal with it and an effective way to do that, Fischer says, is to hold the intention to turn “All Mishaps Into the Path." When a mishap occurs Fischer suggests we take a break from our normal reaction to to – to push it away and get upset about it – to embrace it as being part of our path. In essence he’s going from declaring something is not part of his path to declaring that it is actually part of his path. Since it has just become part of his path that sounds like a pretty smart thing to do.

...When I started reminding myself to turn ‘All mishaps into the path’ I found something negative would happen -say somebody said something I didn’t like – and that turning it into my path made that thing my own instead of it being an unwanted intrusion. Once I was able to incorporate it into my path it lost much of its juice; it became something simply to deal with and sometimes, once I got over my personal reaction to it, it opened my eyes to something I hadn’t seen before.


"Turn All Mishaps into the Path" is an interesting thing to contemplate, don't you think?

It feels like different circumstances would call for this, but they also may take time to take it onto that path. This is interesting, Tabatha. Thanks for telling about it.

I'll be thinking about this, Tabatha. I've been thinking a lot lately about grief and change and disappointment. The idea of having ownership over what life deals you appeals to me, but I also feel the pull to act, to defeat, to change those things. Thanks for sharing this:>)

Thanks for your comments, Linda and Laura! My interpretation is that they are not suggesting that you don't try to act (e.g. take your meds by all means, get physical therapy, etc.) but that you don't get too bogged down in "This wasn't supposed to happen!"

Your post is just what I needed to read today! I'm so glad I stopped by your space! I love the idea of turning mishaps into the path. I think this is so applicable to our life path. Thank you so much for your reflection, and thank you for visiting the ridge last week!