“The night seemed suddenly defiled by the absence of music, as if the silence itself was injecting a sickness that only another song could cure.”
~Jake Vander Ark, The Accidental Siren

In Greek mythology, sirens are irresistible, treacherous creatures who lure sailors to their doom with their songs. The concept of a "siren song" has been fodder for poets and songwriters alike. 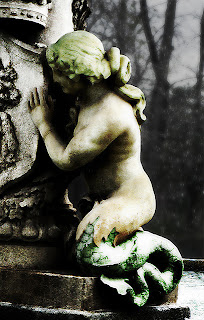 siren on a fountain in Madrid, photo by Marki

This is the one song everyone
would like to learn: the song
that is irresistible:

the song that forces men
to leap overboard in squadrons
even though they see the beached skulls...

Song to the Siren, a song written by Tim Buckley and covered by David Gray:

excerpt from The Sirens
by James Russell Lowell

Look how the gray old Ocean
From the depth of his heart rejoices,
Heaving with a gentle motion,
When he hears our restful voices;

Another quote: "Now the Sirens have a still more fatal weapon than their song, namely their silence. And though admittedly such a thing never happened, it is still conceivable that someone might possibly have escaped from their singing; but from their silence certainly never."
~Franz Kafka

Margaret is our Poetry Friday host today at Reflections on the Teche.

What a great topic, and so many examples! I'll have to spend a little time with it all after work today. Have a good weekend.

Hi, Tabatha! I love the Margaret Atwood poem. You could use this one to teach the concept of the "turn" in a poem. One of my all time favorites is her poem "This Is a Photograph of Me." Filled, as this one is, with surprises.

Your post is so full! I love hearing the sound of music and the sounds of poetry. Inspiring!

Sirens are fascinating...and a little bit creepy...and so irresistible! You've captured all of that here!

I was lured in helplessly... what a terrific post! Thanks for taking a turn around this fascinating topic. (Gorgeous statue up there, and I loved the Atwood poem, too.)

Who knew sirens came in such variety...always creepy, and yet irresistible, too.

I love the way you look at topics from so many points of view--as if you were making a slow circle around them.

I enjoy your posts so much -- I always learn something new and find myself curious about how you decide on your topic each week!

I think it's fascinating, given that it's the sirens' song that makes them famous, that you found more than one quote about the power of the sirens' silence. Cool post as always, Tabatha!

Hi there Tabatha, like you I've also had a fascination with sirens and their music. I was particularly taken by silence as a "more fatal weapon than their song" - ah, the wiles of women and their ways. Always a marvel. Wonderful post, Tabatha!

Thanks for using my quote! Love it!