"If all the personal computers in the world —approximately 260 million computers— were to be put to work on a single PGP encrypted message, it would take on average an estimated 12 million times the age of the universe to break a single message."
~William Crowell, Deputy Director of the National Security Agency, 1997

I went to the National Cryptologic Museum recently and enjoyed seeing various ways ciphers have been used over time. Have you heard of the Navajo Code Talkers from World War II? The Navajo language itself turned out to be an unbreakable code. (My kids like Code Talker: A Novel about the Navajo Marines of World War Two by Joseph Bruchac.)

I'm including a couple of shots (not mine) from the National Cryptologic Museum below this Khan Academy video. For more Khan Academy cryptography videos, click here. 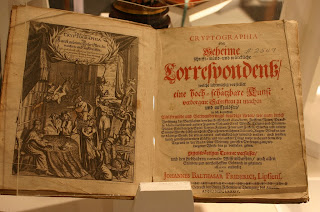 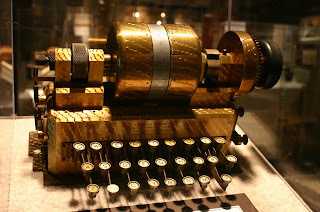 The CIA's Kryptos sculpture
photo by the sculptor, Jim Sanborn
Kryptos is an encrypted sculpture by American artist Jim Sanborn located on the grounds of the Central Intelligence Agency (CIA) in Langley, Virginia. Since its dedication on November 3, 1990, there has been much speculation about the meaning of the encrypted messages it bears. Of the four messages, three have been solved, with the fourth remaining one of the most famous unsolved codes in the world. The sculpture continues to provide a diversion for cryptanalysts, both amateur and professional, who are attempting to decrypt the final section. (info from Wikipedia) 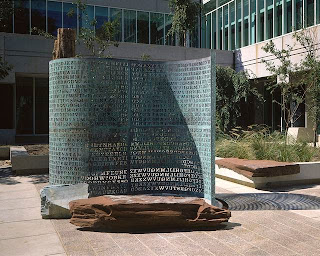 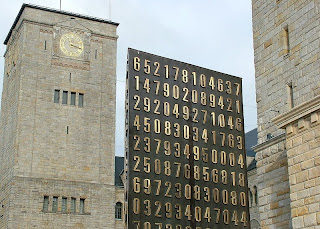 A giant copy of the Rosetta Stone
by Joseph Kosuth in Figeac, France, the birthplace of Jean-François Champollion 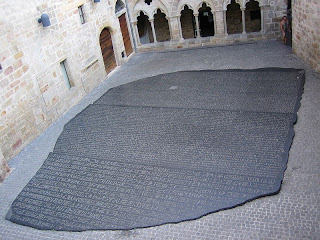 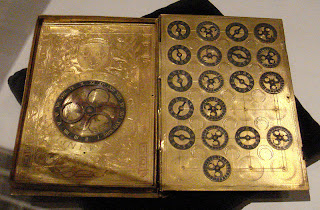 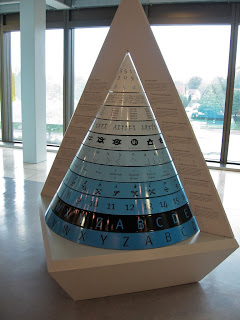 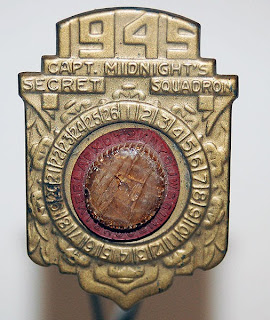 * Steganography, sending messages that don't seem like messages at all
* Classical Cryptography
* Kryptos: A coded sculpture at CIA headquarters has yet to be fully broken.
* Make your own wallet-sized Enigma-like machine
* The KidsMakeStuff Cipher Disk

We often have students choose 'codes' for their unit study. It's fascinating to think that that one code still isn't broken even with all the complex computers available! I like the Bruchac book too-a good story! Thanks Tabatha.

But the piece de resistance is the 1945 Captain Midnight decoder badge!

What a fascinating museum, and full of interesting facts, I'm sure.

Hello from Spain
I have a good solution for the last message of the sculpture, but I have not used a code.
I've only used the art of deduction according to the clues left by the sculptor

According to Occam's razor, the simplest solution to the mystery of the fourth and final message of the sculpture is this:

Because
if K4 is a real text (like K3), then i should find key phrases/quotes
related to Berlin (place). I look for the most important and beautiful
texts (Kennedy & Reagan speeches)

And here I found this fragment:

Reagan said:
“Today, thus, represents a moment of hope …….PEOPLE TO CREATE A SAFER, FREER WORLD AND SURELY THERE IS NO BETTER PLACE THAN BERLIN THE MEETING PLACE OF EAST AND WEST, to make a start.”

” …… can you see anythyngq?“. (The account of Howard Carter, the renowned
Egyptologist, as he opened King Tut’stomb breaking the WALL).

THEN K 4 has an beatiful answer

“ People to create a safer, freer world ……..” ( Reagan speech at the Berlin WALL)

This is a very nice/lovely solution but I have not a mathematical explanation.
Maybe you can help me to solve the last problem: THE CODE.