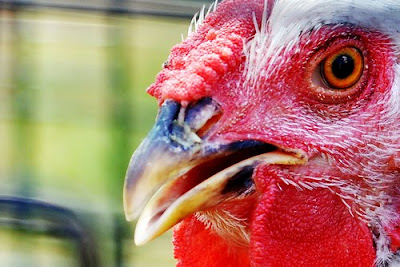 And growing larger, becoming a cloth,
pitching itself a tent where they all may enter,
inter-unfurling itself for them all, in the tent
(the morning) which soars free of ties and ropes –
the morning, tent of a weave so light
that, woven, it lifts itself through itself: balloon light.

Linda at TeacherDance is our Poetry Friday host this week.

I love the idea of roosters weaving a cloth together. What an interesting combination of thoughts. Thanks for sharing it.

"...to criss-cross
the sun-threads of their rooster-shouts..." My goodness, how beautiful is that? I will never look at morning the same again -- thanks for sharing this wonderful poem!

This poem is breathtaking. I'm squirreling it away so I can savor it over a cup of coffee one morning. I just love the imagery so much...
I have a painting in my bedroom called Warp and Weft that was done by an Australian artist. Every time I look at the loosely woven lines of that painting I will now think of this poem.

Startling imagery. Love it! Thanks for sharing.

This allowed for such a wonderful visual for me....thank for sharing this, Tabatha.

Thank you for this Tabatha. How wonderful are the words of morning greeting. I am always amazed at the different sights poets give us of the world: "which soars free of ties and ropes". Exactly!

Oh...more than lovely. "pitching itself a tent where they all may enter"--I want to do that with the criss-crossing wordthreads that we weave!

And this reminded me of the Twilight Bark. : )

I'd love to join the Summer Poem Swap. Do you want a separate email?

A new way to think about all my neighborhood roosters! Thanks!

Why does it say I am Anonymous? This is Ruth, from thereisnosuchthingasagodforsakentown.blogspot.com

How great is this poem?! I love that you likened the imagery to what happens on Poetry Friday, too. These lines especially snagged me:
"so that the morning, starting from a frail cobweb,
may go on being woven, among all the roosters."
:0) Thanks for sharing!

Thank you, all! I will send you an email once I get home, Heidi. We are spending the long weekend away. I'm sorry I haven't been able to do much Poetry Friday visiting.

I remember roosters weaving morning at my grandmother's house. What a lovely image. And that photo you chose is fabulous!

Tabatha, thank you! You share the most interesting poems. Now I will be examining my life for weavings.