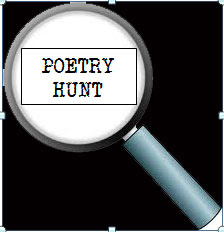 Still wondering what you might do at your school, library, community center, church, or home for National Poetry Month? Ever had a Poetry Hunt?

The idea is this: Post poems --with a little info about the poets-- around your building and then make a list of clues that lead from one to the next. Create a form for participants to fill in the names of the poems and poets as they find them.

For instance, an elementary school Poetry Hunt could begin with:

* Take twenty steps and look to your right to find a poem about a fish with no bones (About the Teeth of Sharks by John Ciardi)
* Back up three yards and you will find a poem about a creature with whiskers (Midnight Stray by Rebecca Kai Dotlich)
* Take ten steps diagonally and find a poem written by a poet who was born in 1909 (W by James Reeves)
* Go around the corner and look for the water fountain, where you will find a weather poem (Sunflakes by Frank Asch)
* Go up the stairs. Outside the doorway, find a poem by a woman who was born in Baltimore, Maryland (A Little Song of Life by Lizette Woodworth Reese)
* Turn around and look for the poem by a Newbery award winner (Wish by Linda Sue Park)

You could have the poems match the location in the school. For example, you could have music-related poetry near the music classroom:
* Find a song that was written on the occasion of President Lincoln's birthday (Lift Ev'ry Voice and Sing by James Weldon Johnson -- I would only include the first verse)
* Find a poem that was written in a sidewalk (Meadowlark Mending Song by Margaret Hasse -- maybe you could include a little image of the sidewalk, from the Web)

Near the gym:
* Find a poem written by the poet who wrote the shortest poem in the world (Shortstop by Charles Ghigna)

P.S. Last week I had a request for more poems from Against Forgetting. Here's one, but I'm warning you, it's heartbreaking. (It's the third one down, A Conversation Through The Door). I noticed that this particular poem is the subject of a plethora of essays for cheaters (i.e. unethical writers write papers which they sell to disgusting companies who sell them to dishonorable students.) Ugh.

I am always impressed by the wonderful work you put into your posts.

This is such a great idea. Makes me wish I were a student again so I could go on a Poetry Hunt.You've listed some wonderful poems here that should get people excited to try this. :)

Wow, Tabatha - now this is my kind of hunting! What a terrific idea and wonderful sample poems. Thanks for sharing!

Fabulous! I shall now spend winter break devising additions to the wonderful ideas you posted. Thanks, Tabatha!
P.S. Ah, those heartbreaking poems. I had to stop reading them for now - they do make one's heart heavy.

I love this idea. Thank you for sharing.

Tabatha, when I had my own classroom, my students took different areas of the building & wrote a poem to match that area-much fun & they were quite clever. I love your idea & now that I might need to do something without the help of lots of students, a treasure hunt for poetry might be just the gift for all. Thank you very much! And for the ideas too. My brain is already searching for more!

Another great idea! Thanks for sharing these with enough lead time to make them happen!!

If you need additional "clues" or help thinking of poems for certain spots, let me know and I can help you brainstorm.

A Poetry Hunt is a great idea! I've done a Poetry Scavenger Hunt (looking for poems with certain literary elements) in past years, and the kids really enjoy it. I think the hunt sounds even better!

What a fun idea...for both children and adults. It reminds me of a scavenger hunt-type game my employer made us all do when we first started working at my company. I hope lots of people implement your idea for Poetry Month!