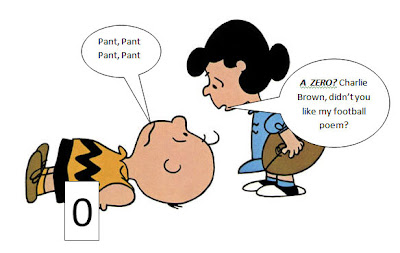 by Elena Y.
If you're a teacher and you're wondering how to celebrate National Poetry Month, here's an idea that you can start in March but can take you through April -- a March Madness Poetry Tournament.

The National Council of Teachers of English says:

The idea is to create a basketball tournament-pairing chart like the NCAA does each year in March using poetry and determine a final winner by reading the poems. Choosing the poems and who will read them are the big decisions. Locate 64 poems and pair them off, just like basketball teams. Read two poems each day and let the students vote on the “winner.” Do this until you have a final four and the final winner.


More suggestions from the NCTE regarding selecting the poems:


Locate poems written by poets found in all four compass directions in the US---East, West, North, and South similiar to the basketball brackets.
If 64 is too many, just start at 32, the second round in the 64 field.
Break it into two sections, representing the two sides of the tournament. Poems that are a little "harder" are on one side and "easier" poems on the other.
Create themes for each day of poetry such as death, humor, love, growing up, sports, and others.

What poems would you have in your tournament? What would you pit against each other? For teens, I might use...

* Allow Me to Introduce Myself by Charles R. Smith vs. "I’m A Jazz Singer," She Replied by James A. Emanuel
* Missing by Cynthia Cotten vs. I'm Making You Up by Chrystos
* Did I Miss Anything? by Tom Wayman vs. Totally Like Whatever, You Know? by Taylor Mali
* Prayer to Laughter by Tom Agard vs. If You Had To by Sam Green or Valentine for Ernest Mann by Naomi Shihab Nye
* The Peace of Wild Things by Wendell Berry vs. The Patience of Ordinary Things by Pat Schneider
* I Told You by Ella Wheeler Wilcox vs. The Summer Day by Mary Oliver
* It's all I have to bring today by Emily Dickinson vs. Question by May Swenson
* In a Dark Time by Theodore Roethke vs. The Panic Bird by Robert Phillips
* Facing It by Yusef Komunyakaa vs. Here, Bullet by Brian Turner
* Quarantine by Eavan Boland vs. Time Does Not Bring Relief by Edna St. Vincent Millay
* Count That Day Lost by George Eliot vs. When You Go Anywhere by William Stafford

The Iris Chronicles has the Poetry Friday round-up today.

This pairing of poems is a wonderful idea.

I see them not so much as being in competition but as complementing each, taking part in a conversation.

Gosh, this is a cool idea. And you've given us so many poems to explore. Thank you! I'm going to be busy for a bit and will link to this post from TPF Facebook page! This idea makes me think of the book of paired poems collected by Naomi Shihab Nye and Paul Janeczko - I FEEL A LITTLE JUMPY AROUND YOU.

What a fun idea! Lots of kid-appeal. Thanks for sharing the resources.

Love all your suggested pairings. Sounds like a wonderful PM idea :).

Hi, Tabatha. This sounds like fun. I think the students would have as good a time choosing and championing their favorite poems as they would with the actual contest.

I love this idea! Great for enjoying poems as well as cooperative learning. And, thanks for sharing some pairings - it gives me the springboard I need!

I love this idea... I'd love to see the final pairings if you do this so we can play along at home.

What a great idea. I will share this with teachers at my school. Thanks, & the poems are so inviting. Thanks for starting us out so well.

Wow, what a great experiment this would be! I think I may do it just within my own family. You are SO WONDERFUL to link to all those poems! I'll be back!

Tabatha, this sounds great, I didn't know that such a tournament exists - reminded me a little bit of Fleischman's Poems for Two Voices - although this one I can see, differs quite markedly. I also love how thoughtful your selection and pairing of poems seems to be. I especially enjoyed Count that day Lost versus When you go anywhere by William Stafford. I am becoming a huge Stafford fan, thanks to Poetry Friday.

I saw this idea last year and loved it so much that I put it on my calendar this month to plan for this March!

Thanks for the ramp up!

This would be a fun thing to do with my grade level -- first, just sitting around picking the poems, and then having the kids vote on them.

Maybe we could get our poems on the announcements and do the voting school-wide!