A Museum Where You Can Spend The Night

I would *love* to go to the Women's World Cup next year, which will be in Germany. If I actually got to go, wouldn't it be great to include a night or two at the Arte Luise Kunsthotel in Berlin? This hotel has fifty rooms, which have all been uniquely decorated by different artists. They say that most rooms are recommissioned every 2-5 years, so its "exhibits" will rotate. The hotel's history is interesting-- the owners got the idea for an "artists' hotel" even before the fall of the Berlin Wall, and they began the project in 1994. It wasn't until 2003, however, that its current incarnation was completed. 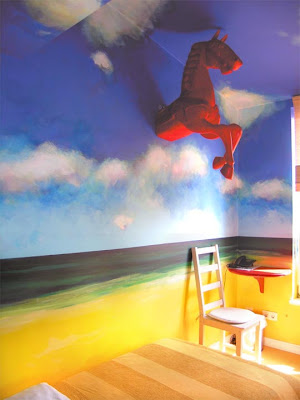 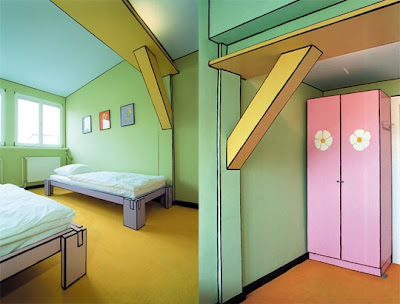 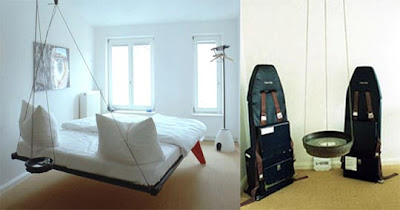 "The dream of humanity; the feeling of lifting off, and limitless freedom above the clouds. Playing with these associations the artist uses airplane fragments to construct usable furnishings. The bed consists of a tail-wing unit, steering elements, and motor parts, and is hung from the ceiling by steel cables. Also hanging from the ceiling are numerous tables, each constructed from a different stage of a turbine. The chairs also originate from an airplane as do the shelves, which are built from propeller blades. Appropriately, the guests may record their dreams of flying in the flight log for the next passenger." 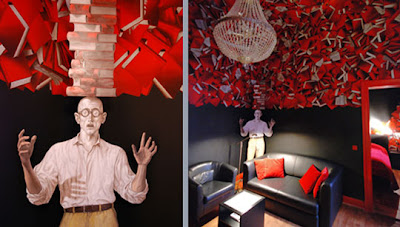 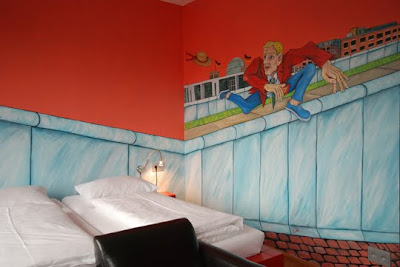 "Vincent's Bedroom is an artist's room at the "Künstlerheim." With images, bare furnishings, and simplicity it is meant to resemble the atmosphere and circumstances in which Vincent van Gogh lived. The artist wants to stimulate the imagination of the guests, who will be confronted with both the person and the work of one of the most famous artists in history during their stay at the hotel. Literature on the subject is also available to enable the process."

Absolutely wonderful idea! Art is where you find it...and art can be anywhere.

I especially like the Flight room and the Jumper room...for completely different reasons, but that's art for you.