When I speak of the fear, intimidation, arrests and public shaming of intellectuals and religious leaders who dare to speak their minds, and then I tell you that I’m from Saudi Arabia, are you surprised?
~Jamal Khashoggi

Ruth Hersey has a perseverance-honoring post today as part of her thirty-days-of-gratitude, worth a read.

I received an invitation from the international literature festival berlin [ilb] that I wanted to share with you. (I did a post three years ago in response to another invitation by ilb regarding Jamal Khashoggi and the UDHR.) 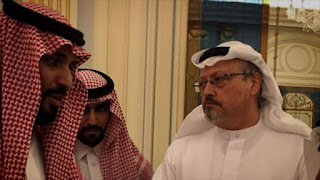 Worldwide Screening of »The Dissident« by Bryan Fogel

The international literature festival berlin [ilb] invites individuals, schools, universities, the media, and cultural institutions to participate in a Worldwide Screening of »The Dissident« by Bryan Fogel on December 10, 2021, the anniversary of the Universal Declaration of Human Rights proclaimed by the United Nations in Paris in 1948. The documentary reconstructs the background of the murder of the Saudi Washington Post journalist and regime critic Jamal Khashoggi in 2018 and illuminates the geopolitical and power-strategic context of the case.

»The Dissident«: American documentary filmmaker and Academy Award winner Bryan Fogel spent two years researching for the film. The two-hour documentary analyses the course of events at the consulate in Istanbul and also sheds light on how those in power in Saudi Arabia suppress freedom of the press and manipulate public opinion with trolls and bots. Turkish investigators, journalists and opposition members in exile, Khashoggi's fiancée Hatice Cengiz and the former CIA director John Brennan have their say.

Institutions and individuals who would like to participate with a screening on December 10, 2021 are asked to send us the following information by 15 November 2021: Organisers, venue, time, participating actors, event language, link to your website if applicable. The email address is: worldwidescreening@literaturfestival.com. The ilb will announce the events on the website and on social media.

You can find The Dissident on Amazon, Vudu, Redbox, and Apple TV.

I know this is an important film...I've heard that it is well done and, at the same time, heart-breaking.

I thought Ruth Hersey's post and haiku were excellent.