Language exerts hidden power, like a moon on the tides.
~Rita Mae Brown

Happy Poetry Friday! Thanks for coming!

I have some wonderful bilingual poems to share, plus an invitation to join the Summer Poem Swap, and Mister Linky to collect your links. 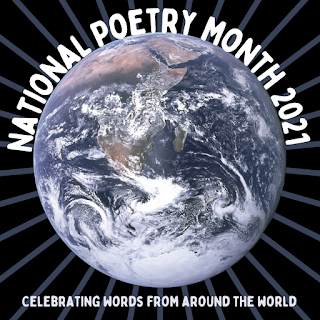 My Poetry Month project is short dual language poems, inspired by my Duolingo studies of Scottish Gaelic and French.

Last week, I had cool poems from Diane Mayr, Laura Shovan, Tanita Davis, and Jone McCullough (Tanita's and Jone's were in the comments...I will do an extra round-up of comment poems later). This week, we have Janet Clare Fagal and Laura Purdie Salas.

Home is where the heart is
the art is
the flowers, the gardens
the poems
the memories
the books.

And all that love in every nook.

Laura Purdie Salas wrote a fun book called Snowman-Cold=Puddle: Spring Equations (2019). For NPM, she's writing poetic equations every day. She translated one into Spanish for us: 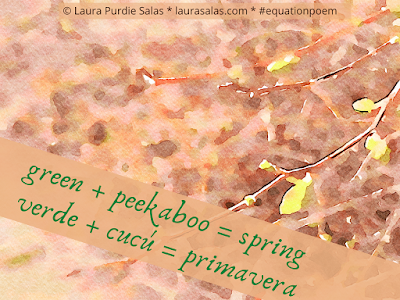 Janet was inspired by Laura's equation poems to write one, too: 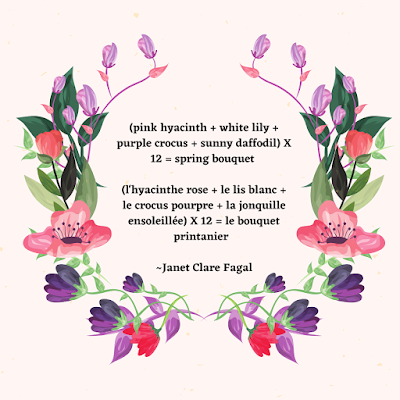 Here's mine for this week. It's in Spanish, which I studied briefly back in the day. I studied Latin for two years, French for four, and Spanish for a summer in Guatemala.

I've harvested some words
from the tree of my heart,
take what you want:
love, joy, yours, mine

Let's talk about the Summer Poem Swap. Would you like to send a poem to a Poetry Friday friend and receive one in return? Join the Summer Poem Swap! You can write anywhere from 1-5 poems. Just let me know how many you want to do and whether you would like to email the poems or mail them. Write me at tabatha(at)tabathayeatts(dot)com by April 30th. 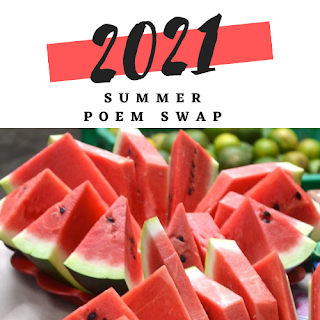 oooooh! You are having a fun Poetry Month. I love the final equation poem with pink hyaciths! I'm having fun flitting from blog to blog for inspiration. Thank you for hosting! YES to poem swapping. Whoo Hoo!

THANK YOU for hosting, Tabatha! Oh, I love your double-language poem project SO much. Hats and chapeaux and sombreros off to each featured poet today - well done! Merci and gracias. :0)

Dear Tabatha,
hooray for Summer Poetry Swap. I wouldn't miss it! I love your Spanish poem, harvested words. Swoon.
Here's my Scottish Gaelic blessing I wrote this week:
Welcome the sun
as red as a poppy
Welcome the moon
as white as bogbean
Welcome the stars
as many as grains of sand
Welcome the sea
as wide as the Milky Way
Welcome the earth
a floating marble in the universe
Welcome peacefulness

We need to record this and share as well.

escape from scatter
give yourself moments of
imagination

Glad you're being so poetically creative this Poetry Month! Alas, I'm so busy writing, I don't have any spare time to write...how ridiculous is that? Thanks for hosting though, and best wishes with your language studies!

What a wonderful project -- enjoyed all the poems in this post! Makes me wish I were truly a multilingual person. Janet's poem was poignant, since Lee's birthday is coming up soon. Thanks for hosting this week!

Thanks for hosting, Tabatha. I'm so impressed with yours and others multi-lingual poems. Oh to be bilingual!

Tabatha, your project is inspired. I love:

I've harvested some words
from the tree of my heart,
take what you want:
love, joy, yours, mine

Thank you for hosting Tabatha. I am loving your dual language poems, although they do make me regret not having a second (or third or fourth) language.

Each one is beautiful, Tabatha. Home, spring, "the tree of my heart" equals "notre beau monde". I hope I can find time to try one these next few days! Merci! (I have two posts today, my poem & a blog tour for a poetry book.)

Thanks for hosting Tabatha and I do like your focus on bilingual poetry. Such an important recognition of diversity and the contribution of different cultures. We are richer for such awareness.

Tabatha, thank you for hosting this week. Amidst the clutter of my life move, I had to save some time for Poetry Friday. I love your bouquet of dual language poems. They brighten my weekend. I studied French in high school and a year in college but I could never speak fluently. Perhaps, a simple dual language poem will evolve. As soon as my post is ready, I will post.

Tabatha, what a celebration of word-love across languages! Such a lovely collection of poems. They are all like those words you've harvested from "the tree of your heart" - love, joy, yours, mine; really invites reflection on sharing what we love and what brings us joy as well as receiving that which others offer. And, ultimately, poetry being the language of the heart. Thank you fot these many gifts and for hosting today.

Thanks for hosting! I happened to quote something related to the moon, too. Great minds think alike!

Dear Tabatha,
Your lines from "the tree of my heart" melt my heart. And Janet's sweet dedication in her lovely Laura Purdie Salas-inspired equation poem is touching. All your festival of multi-lingual poetry uplifts. YOU are a joy to me, to Poetry Friday, to the Uni-verse.
Appreciations for such a generous gift of your Poetry Friday hostess post.
xo
Jan

Thank you so much for hosting, Tabatha. Didn't realize you speak Spanish (and wrote poetry too). I am green with envy. Studied French and Spanish too (back in the day, like you), but hardly remember any of it. Boohoo.

Woo-hoo! Great collection of multilingual poems, Tabatha! I have my German/English poem on my blog in honor of your project. Thank you for hosting and being all around awesome! :)

Multilingual poems-- what a treat! Thank you for hosting, Tabatha, and I look forward to diving into all the treasures that poets have shared this week.

Thanks for hosting! I'll be back around this weekend to read!

Gosh, I love your project! I need to play catch up this weekend, but here's a translation of my haiku today in French!


Oh my gosh, Myra, I don't speak Spanish. I know just enough to confuse myself. I got help from Google Translate. xo

Tabatha, thank you for this bouquet of beauty! And I love the watermelony summer swap graphic. xo

Wow! I'm so impressed with your dual language poems--what a great idea. I may have to try one myself.
Meanwhile, my co-blogger, Esther, is kicking off our TeachingAuthors 12th Blogiversary celebration my sharing a poem from our fellow TA, April Halprin Wayland. Since I don't see a link from Esther here, I've added one on her behalf.

How beautiful to see your words in two languages. A gift times two. I am so envious of your multi-linguistic abilities.

That tree of your heart is pretty special, T. <3 The fact that these poems are short makes it almost seem doable. I wish I had more confidence though. I don't trust Google translate or my memory of high school French! Maybe I'll try something in pig latin. LOL

Thank you for hosting. Your bilingual poetry thing has been such a hoot. I haven't written much but I managed to post a haiku today. Thanks for the challenge!

Thanks so much for hosting! And thanks for featuring bilingual poems-- so important, so lovely!

I love the idea and examples of your bilingual poems. Alas, I've forgotten most of my high-school Spanish, although I can sometimes understand it in written form. Your words from the tree are lovely.

Tabitha, Thanks for hosting. I like this idea of bilingual poems. I have studied Dutch and Italian in Duolingo. Your post made me want to go back to the Italian (we were supposed to go there last summer). I'd like to try writing some in Italian. It sounds so romantic! Lol!

Thank you for hosting today, Tabatha. These dual language poems are so much fun! I especially love your heart words. The world needs more joy!

Thanks for hosting! So many treasures today!

Thanks for this neat challenge, Tabatha. I enjoyed trying to figure out the French, though like you I availed myself of Google and other translators. My native French speaking friend suggested just today that the last line should read et tout l'amour dans chaque recoin, so remove the word "que".

On to a poem in Italian the next time I can try. Thank you for including mine along with your heartfelt poem. I love this idea.
PS I am not fluent in French, I studied Spanish but have not used it in ages and well, Italian, the language I heard as a young child which I believe I can learn fairly easily especially if I am going to visit my last living cousin in Italy. I hope that the virus problems ease up as I had plans to travel there. And with anything, the more you practice the better it is....so that is an issue but perhaps in this age I can find someone to communicate with.
Thanks again,
Janet F.

Harvesting words from the heart. That's the secret of poetry, isn't it. I enjoyed your multi-lingual poetry. It's interesting to see the same poem written in different languages.

I think writing bilingual poems is such an amazing endeavor, and I love your Spanish one. If I tried, Spanish would be my second language and might encourage me to brush up. I also loved Janet and Laura's contributions. Great post.

I love the bilingual poems! Thanks for sharing them. I especially like your poem about the tree of your heart. I'm studying Spanish now, and I do enjoy the sound of it--so I enjoyed your in both languages. I enjoyed Janet and Laura's poems and beautiful images, as well. And thanks for hosting today!

Late this weekend for good reasons! "Take what you want from the tree of my heart"--I know that's not what you wrote exactly, but isn't it a nice first line for a song? I'm thinking every day lately why I don't write songs.
And now I've gotten out my guitar. What's happening to me???

I love your bilingual series, Tabatha. Looking forward to more.

Thank you so much for inviting us to your duolingo poems. (I remember when we learned "bh" = "v" and were as shocked as you. I think it was when we were watching the UK Apprentice, and there was a contestant named Siobhan. Shevonne. What?! Blew my mind. Randy and I have been to Scotland twice, and it's my favorite place in the world. Having seen the Gaelic on road signs, I greatly admire your determination to learn the language!!!

I love Janet's poem for Lee and Charles--mercy. And thank you for roundin g us up, Tabatha!

Oh--and YOUR poem. "Take what you want." Isn't that what love offers. So yearning and vulnerable. Beautiful, Tabatha!