Cranberry sauce may be a Turkey Day staple, but it wasn’t available in a can until 1912, when a lawyer named Marcus L. Urann got the idea to buy a cranberry bog and can cranberries. He eventually formed a cranberry cooperative that renamed itself Ocean Spray. By 1940, cranberry sauce had become the jiggly, canned log beloved (and argued over) by millions of Americans.
~Erin Blakemore, Smithsonian magazine 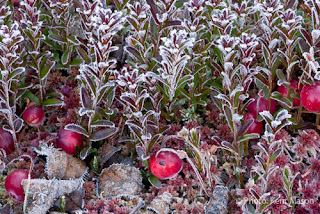 I didn't write a poem about cranberries (for Becky's prompt) but I did find this poem by Carl Sandburg. Helga was his daughter.

THE WISHES on this child's mouth
Came like snow on marsh cranberries;
The tamarack kept something for her;
The wind is ready to help her shoes.
The north has loved her; she will be
A grandmother feeding geese on frosty
Mornings; she will understand
Early snow on the cranberries
Better and better then.

The Consent
by Howard Nemerov

Late in November, on a single night
Not even near to freezing, the ginkgo trees
That stand along the walk drop all their leaves
In one consent, and neither to rain nor to wind
But as though to time alone: the golden and green
Leaves litter the lawn today, that yesterday
Had spread aloft their fluttering fans of light.

What signal from the stars? What senses took it in?

This xkcd comic seemed almost like a poem to me.

The Time Before and After Land:

Sloth Reads has the Poetry Friday round-up. Thanks, Becky!

On one trip to Boston, My students and I drove out into the country to visit a cranberry bog. We harvested them, purchased some, went back to our hostel and made cranberry sauce. Some kids loved it, some had never had it, either had only had that "Ocean Spray" or thought it terrible. As for the Nemerov, while alarming first, I have read more than one sci-fi novel that has at least part of the human race suddenly die, or disappear. And there is that wonderful book titled The World Without Us by Alan Weisman, one I re-read once in a while. Thanks, Tabatha, love your post. Happy Thanksgiving!

Oh, such lovely poems. I've only had the canned cranberries. I would love to see those cranberry bogs and pick some to cook and eat.

Wow...."early snow on the cranberries." The understanding it with time. This is a keeper.

These are both lovely. I especially enjoyed The Consent. And I am always in the mood for a good pun so I loved the comic. Thanks for sharing.

Cranberry sauce is something I've only tried a few times- relatively rare in Australia. But the poem is lovely!
The comic made me laugh. Thanks for your post.

I like your time line Tabatha, especially the bees landing on thyme! :)
Two beautiful poems here–I like the story Sandburg unwinds about his daughter. And I know very well about the gingko leaves as my neighbor has a gingko right next to our fence–I think we get most of the leaves–and they do fall like that. Thanks for introducing me to Howard Nemerov! Hope you are having a wonderful time at the conference!

I am pro-canned cranberry log :) The poems you shared are lovely. Happy Thanksgiving!

Thanks for sharing these poems today. I especially love The Time Before and After Land.
We have many cranberry bogs near where I live. Unfortunately, I am not a fan of cranberry sauce in any way or shape.

The Time Before and after is my favorite. I so love cranberries I just bought three bags.

You always share such a wonderful assortment of things on your posts, Tabatha. It reminds me of when I was hanging photos for a show and experienced the process of selecting which photos to put together and how those choices influenced each photo and how it appeared or was interpreted. You are a master curator. I love these pieces and how they interact in my mind. Thanks!

Love that Sandburg poem! When Dylan was in elementary school in Australia, I would make a turkey, cranberry, and cucumber sandwich for his packed lunch everyday! He was a lucky boy. I only got PB&J.

What happened with the gingko this year? Usually I see a whole bunch of photos on social media of people posing with yellow leaves, but this year we just seemed to skip that and go straight to snow. Thanks for sharing your great finds again this week - you always find the best poems.

This post is full of sweet and tart, like cranberries. Thank you for always finding the perfect poems! (And the "Thyme"-line was some welcome comic relief... ha!) I always make cranberry sauce now, but growing up, my brother and I both tried to claim the end "piece" from the jiggly canned sauce, you know, with the rings on it? (Okay, I still want that one if given the choice...!) Thanks for the history of this little item. Happy Thanksgiving to you & yours. XO