Those who plead their cause in the absence of an opponent can invent to their heart's content, can pontificate without taking into account the opposite point of view and keep the best arguments for themselves, for aggressors are always quick to attack those who have no means of defence.
~Christine de Pizan 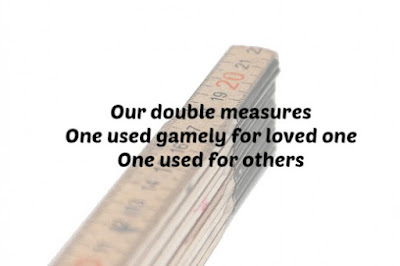 I've been thinking about double standards lately, principally because people often don't even notice them. They hold people they like (or agree with) to a different standard than people they don't like. They can even be righteous about it. This is commonplace enough that people on all sides of the political spectrum do it. It's natural to cut people you like some slack, but nobody likes to be treated unfairly. Maybe we could consider, "Can I switch it around and see if it's still equitable?" (Unfortunately, I think a lot of people feel disrespectful enough about folks they disagree with that they don't care about being fair. Sigh.)

I looked for poems about double standards and found one by Frances Ellen Watkins Harper. You should read the whole thing, but here's an excerpt:

...Crime has no sex and yet to-day
I wear the brand of shame;
Whilst he amid the gay and proud
Still bears an honored name.

Can you blame me if I’ve learned to think
Your hate of vice a sham,
When you so coldly crushed me down
And then excused the man?

A quote that made me laugh:

A man once asked me ... how I managed in my books to write such natural conversation between men when they were by themselves. Was I, by any chance, a member of a large, mixed family with a lot of male friends? I replied that, on the contrary, I was an only child and had practically never seen or spoken to any men of my own age till I was about twenty-five. "Well," said the man, "I shouldn't have expected a woman (meaning me) to have been able to make it so convincing." I replied that I had coped with this difficult problem by making my men talk, as far as possible, like ordinary human beings. This aspect of the matter seemed to surprise the other speaker; he said no more, but took it away to chew it over. One of these days it may quite likely occur to him that women, as well as men, when left to themselves, talk very much like human beings also.
~Dorothy L. Sayers

Check It Out has the Poetry Friday round-up. Thanks, Jone!

Powerful post, Tabatha! Thought-provoking quotes bookending it. Michelle Liew Tsui-Lin's poem is a strong punch. And Harper's poem... I can hear her voice still echoing into our century. So moving!

After reading the entire poem, I had to learn more about Francis Ellen Watkins Harper. I found out that she was an African-American abolitionist, suffragist, poet, author... active in other social reform, a member of the Women's Christian Temperance Union.
Thanks for sharing!

What a powerful poem, and I love that quote by Dorothy Sayers. So funny. Sad that the world hasn't really changed -- the subject matter of that poem is as relevant today as it ever was.

Wow. As both Brenda and Alice have pointed out, Harper and Tsui-Lin's poems really make you stop and think. Thank you for reminding us to be mindful of treating everyone fairly.

Oh yes, the double standard thing -- so true it hurts. Great poem and I enjoyed that quote. This post made me think about Hillary and when she was on the news yesterday I realized how much I missed her. Sigh.

And we who believe that today's news is "new" must look again at the poem you shared, realizing it was written so long ago. Wow, in my mind, it might have been written yesterday. Love Dorothy Sayers' mysteries, an illuminating quote from her. Thanks, Tabatha.

Love that Sayers quote...and Linda's comment about that poem, so modern sounding.

Great post with much to ponder. Like the man in the wonderful ending quote, I'm going to take it away to chew over a bit. Thanks so much for sharing!

Ha! Yes, men...thing women so different and vice versa I'm quite sure. I know I am guilty, myself. This past year, my olw has been "listen" and I've really changed in my views a lot. This has bothered some who are close to me. They don't like the change. I think it may be because listening isn't something that is well practiced? I'm really not sure. But, I like the idea of walking away and chewing on something....that's what good listening is. It's what good people do, I think too. Have a great week. I always love checking in on your blog.

Here's hoping we grow together as humans in 2017! xoxo

Wow. Some really deep thinking here. I will be reflecting on this throughout the day. Double standards, indeed.