For People Such As Me and You

Today we have Hilaire Belloc, author of the parody Cautionary Tales for Children: Designed for the Admonition of Children between the ages of eight and fourteen years. It contains poems with such lovely titles as "Henry King: Who chewed bits of string, and was early cut off in Dreadful agonies" and "Rebecca: Who Slammed Doors For Fun And Perished Miserably." 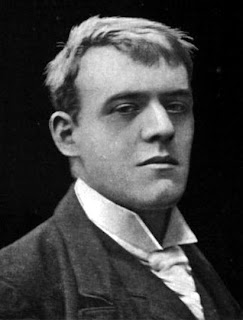 Hilaire Belloc, perhaps in need of a nap

Upon being asked by a Reader whether the verses contained in this book were true:

And is it True? It is not True.
And if it were it wouldn’t do,
For people such as me and you
Who pretty nearly all day long
Are doing something rather wrong.
Because if things were really so,
You would have perished long ago,
And I would not have lived to write
The noble lines that meet your sight,
Nor B. T. B. survived to draw
The nicest things you ever saw.
H. B.


Jone at Check It Out is the Poetry Friday round-up host this week.

Hah! Interesting, funny stuff, T. He was quite a character.

The librarian in me likes this Belloc poem: Dedication on the Gift of a Book to a Child.

Child! do not throw this book about!
Refrain from the unholy pleasure
Of cutting all the pictures out!
Preserve it as your chiefest treasure.

Child, have you never heard it said
That you are heir to all the ages?
Why, then, your hands were never made
To tear these beautiful thick pages!

Your little hands were made to take
The better things and leave the worse ones:
They also may be used to shake
The Massive Paws of Elder Persons.

And when your prayers complete the day,
Darling, your little tiny hands
Were also made, I think, to pray
For men that lose their fairylands.

Little Brooke does a great job reciting Matilda. I always wonder if poetry memorization will come back to the classroom...

Oh, these are great! I love Brooke's recitation. What expression! It would be a good model to use in a classroom, not only for expression, but to let kids know that they can memorize something. We haven't asked them to memorize for so long in the classroom that I'm afraid they wouldn't know how to start.

An entertaining chap, this Hilaire Belloc. I enjoyed Brooke's recitation as well!

Go, Brooke! My students memorize poetry every year and they are always amazed at themselves once they've done it. I memorize a new poem along with them.

I like the poem Diane posted. This guy is hilarious, and so right!

Great video clip for "The Frog," Tabatha. I'm a huge fan of frogs and visit our local pond to check on the tadpoles' progress every few days.