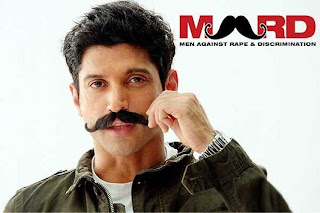 Bollywood director and actor Farhan Akhtar was inspired to start Men Against Rape and Discrimination (MARD) after the August 2012 rape and murder of Pallavi Purkayastha, a lawyer in Mumbai. The mission: "MARD is here to create awareness amongst men to instill gender equality and respect towards women. It is here to bring about a change in the mind set and thereby bringing about a sustained change in society."

Poetry has been a part of the movement from the get-go. Farhan's father Javed Akhtar wrote a poem for the cause, which was recorded by actor Mahesh Babu and cricketer Sachin Tendulkar. Farhan wants his father's poem to become part of the school curriculum to help bring about the sustained change that MARD seeks:


I don't have an English version of Javed's MARD poem, but I thought you might like to read a different poem by him:

A thing that still hasn't come up to my lips and only peeks through my eyes,
It asks for words, sometimes from me and sometimes from you,
So that it can wear those words and come to the lips,
And so that it could be embraced by words..

But this thing is actually a feeling…only a feeling,
It's like a fragrance floating in the air,

Fragrance, which has no voice…and about which you know and I know too.
It is not hidden from the world, what kind of a secret is it?

Laura at Author Amok is our Poetry Friday round-up host.

So glad to see men speaking out against this violence - what a great cause to pledge one's support to.

Joined on Facebook. Thanks, Tabatha. I'd love to see this organization take off.

Overcoming evil with good - thank you for sharing this important, creative work, Tabatha.

Hi there Tabatha, I am glad to see that men are taking a stand about this atrocity as well, and not just women. It reminds me that despite the sordidness, there is hope in this world yet. :) Thank you for sharing this.

So good to know about this organization!

Thanks for highlighting the GOOD in the world!

So glad to see a director and actor starting this organization! I joined on FB!

Great! So glad you brought this organization to our attention.