Created in January 2001, the Festival Au Désert is held every year in the North of Mali.

The Touaregs, nomads from the south of the Sahara, have a longstanding tradition of coming together for annual meetings called Takoubelt in the Kidal region or Temakannit in the Timbuktu region. These meetings allowed them to reconnect with each other (after the nomadic season), have fun, resolve conflicts between individuals or groups and to exchange ideas about the challenges that they were facing at the moment. These encounters are what “Le Festival au Désert” is built upon. “Le Festival au Désert”, in its present form was born in January 2001, at the dawn of the third millennium, following a meeting between Touaregs from Mali and European musicians.

“Le Festival au Désert” is also a way to celebrate “La Flamme de la Paix” (The Flame of Peace), a name that was given to the ceremony where more than 3000 firearms were burned (and transformed into a monument) in 1996 in Timbuktu, putting a solemn end to the rebellion that, for years, shrouded northern Mali in gloom. Until today, this act still constitutes an example of how to manage conflicts, a model that ignites inspiration throughout the world. 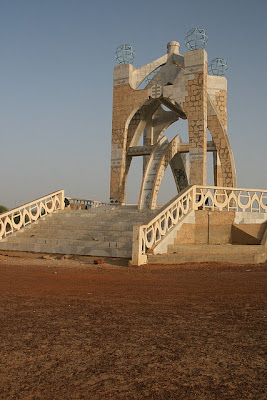 The Flame of Peace, photo by Mark Abel

Unfortunately, the Festival cannot be held in Mali this year. The Caravan of Artists for Peace and National Unity explains:

Since the beginning of 2012, the security situation in northern Mali 2012 has resulted in the occupation of the region by separatist movements and especially by armed Islamists. This has caused a human tragedy. These regional occupiers advocate extremist Islam and the establishment of a "Sharia" hostile to any festival event.

It started with the sacking of the site of the Festival au Desert at Timbuktu (the entrance gate, the water systems, etc.) and the looting of the organization's stored materials (generators, electrical equipment, etc). More serious still was the destruction of the great symbols of our culture and our beliefs (the monuments and mausoleums of the City of Timbuktu), quickly crushing all that appealed to the promotion of culture and tourism.

It is an attack on our collective memory, on all that unites the many ethnic groups of Timbuktu.

The organization of a festival is therefore impossible in this region at this time and this despite our efforts and our determination displayed for years to resist the rise of extremism in the area of the Sahel.

But, we do not want to nor can we allow ourselves to become resigned because safeguarding the values of the Festival, i.e. those of peace and tolerance, now more than ever has become an absolute emergency. This is the message we want to pass among ourselves first and then to others throughout the rest of the world who share with us the same values.

The brute sound of weapons and the cries of intolerance are not able to silence the singing of the griots or the sound of the Imzad (violin) and the Tinde (drum).

The Festival in the Desert must survive all this, even as a nomad like those who founded it, until it can again settle somewhere.


On the Festival au Désert site, you can learn more about the Festival (which starts in February), and watch more videos.

A Festival in the Desert CD

More info about The Flame of Peace

Last year, Kiley Kraskouskas, Leola Calzolai-Stewart, and Andrea Pappito were working on a film about the festival. They said, "As the fate of the festival hangs in the balance amidst a violent standoff between rebel Tuaregs and the Malian government, this film looks at the power of music for international understanding." I'm not sure whether the film was ever finished, but I hope so.

Hi, Tabatha. As I read the opening of your post, I was thinking: but isn't Mali a dangerous place to be right now? It's devastating how quickly a country can descend into political turmoil, devastating for human rights. Maybe, if the film is done, it will help bring global attention to Mali.