Recently, I've been reading A Dictionary of Made-Up Languages by Stephen D. Rogers. OK, a dictionary isn't the sort of thing you read straight through, but it's a fascinating work to browse. 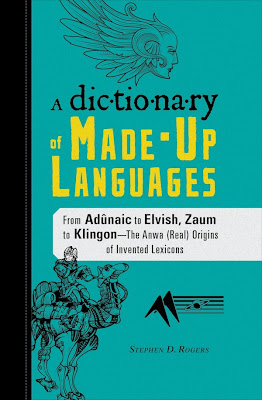 Some things I noticed:

* I was expecting all the languages to be fictional (from movies, books, or tv), but a number of them were designed to be universal languages.

For instance, I had forgotten about Esperanto, which was developed by Dr. L.L. Zamenhof who "hoped to create a universal language that would bring people together in peace." His first Esperanto book was published in 1887, and the first international gathering of Esperanto speakers was held in 1905. There have been gatherings every year since then, except during the world wars. You can learn to speak it here and here.

* Hildegard of Bingen (1098-1179) created one of the earliest constructed languages for her personal use.

* Ithkuil, developed in 2004 by John Quijada, "uses roots and stems to pack more meaning into fewer syllables." An example from Rogers: "icaree" means "My mother's red car looks better than it runs, but I like it."

* J.R.R. Tolkien sure was linguistically inventive. I haven't counted all his listings in the dictionary, but it appears that he invented over a dozen languages for The Lord of the Rings. "Black Speech" is the language of the Dark Lord Sauron and his orcs and is what Sauron uses in the One Ring's inscription. The English version, which you might be familiar with, is: "One ring to rule them all, one ring to find them, one ring to bring them all and in the darkness bind them." Rogers notes that "Black Speech is perceived to be so vile that Sauron's enemies will not dare speak [it]."

I like to experiment so I gave myself the challenge of trying to write a poem using the few words of Black Speech listed in the book. What I wrote wound up considering the situation of orcs -- created solely to serve the commands of Evil -- but with a wider lens. I don't think I ever would have been orc-inspired, if not for this book! This is just an experimental draft, but I thought I'd share it anyway:

A Bridge from the Búrzum

Words can be wielded
krimpat people
as surely as chains.
Walls can be built
out of voices
solid as bricks
in our own thoughts.

Ghâsh,
lit by commands --
to obey, to hunt,
durbat, to destroy --
can burn tightly, brightly,
arduous to extinguish.

A new language
can serve thrakat water
to these flames.

What worlds can be formed
with words that own no past,
that take no snaga,
that build no walls?

A Bridge from the Darkness

Words can be wielded
to bind people
as surely as chains.
Walls can be built
out of voices
solid as bricks
in our own thoughts.

Fire,
lit by commands --
to obey, to hunt,
to rule, to destroy --
can burn tightly, brightly,
arduous to extinguish.

A new language
can serve to bring water
to these flames.

What worlds can be formed
with words that own no past,
that take no slaves,
that build no walls?

Laura at Writing the World for Kids has the Poetry Friday round-up today.

Updated to add: Just got a package I ordered from ArtsyLetters and it made my day! Check Robyn's shop out.

Forgot to mention this post: An interview with Edna St. Vincent Millay.

Hi, Tabatha. This books looks fascinating. In your poem, my favorite stanza was:

Ghâsh,
lit by commands --
to obey, to hunt,
durbat, to destroy --
can burn tightly, brightly,
arduous to extinguish.

With the Dark word, it has mysterious power.

What worlds can be formed
with words that own no past,

Poetry is always kind of a created language, especially ultra-condensed, non-narrative poetry. But each word does have a past, a context. Very cool experiment here!

What fun to read your experiment with Black Speech. I'd never thought of words in quite this context before -- menacing and powerful. I'm in awe of Tolkien's invented languages. It's impressive enough to invent just one. My husband likes to speak Elvish (?) on occasion. :)

What a great experiment! I sort of like not knowing the words, becaues it allows the reader to develop their own interpretation.

I use to go to Esperanto classes with my grandmother sometimes. They socialized more than spoke Esperanto though, and I don't remember any of it.

Fascinating. How difficult it must have been to assume the voice and try to channel meaning in a new voice. Bravo!

I took a class in esperanto in college, was fascinated by it, & when a group of us discovered Tolkien, wrote to each other in runes for a time. How wonderful that you tried this, Tabatha. I attempted to understand the words first, because I didn't realize you had also shared the translation. "Krimpat" does seem to be close to "bind", makes me wonder if Tolkien took some roots from English. The book sounds really interesting.

You rightly report that "There have been gatherings (of Esperanto speakers) every year since then, except during the world wars." It should be added that most use is made of Esperanto in informal contacts. Esperanto works! I've used it in about sixteen countries over recent years. I recommend it to any traveller, as a way of making friendly local contacts.

Over recent years I have had guided tours of Berlin, Douala and Milan in this planned language. I have discussed philosophy with a Slovene poet, humour on television with a Bulgarian TV producer. I’ve discussed what life was like in East Berlin before the wall came down, how to cook perfect spaghetti, the advantages and disadvantages of monarchy, and so on. I recommend it as a very practical way to overcome language barriers and get to know people from a very different cultural background.

There's plenty of poetry in it too.

Fascinating! What I love most is how your reading inspired your writing!

Oh, wow. That book looks fascinating. I wanted to be a linguistics major my Freshman year in college. I hope my library system can get me that book!

Your orc poem is awesome -- I'm not sure I'd dare commit works of Black Speech to paper. :-)

What an inventive post, Tabatha! Lingusitics is fascinating. I didn't know about Esperanto.

Your poem is just the kind of project I think would entice older kids/teens- so many things they could do with these ideas. Follow your lead and write in "Black Speech," or try making up a language of their own and writing poetry from it. Great all around. Thanks for sharing!

Tabatha, this is a great post. I am going to recommend this dictionary to a friend who majored in linguistics. I love your poem, the last verse especially.

It is so appropriate that you included Hildegard of Bingen and her Lingua Ignota, a glossary of about 900 words with which the nuns in her monastery communicated. Saint Hildegard became a Doctor of the Church on October 7! This phenomenal 12th century woman was innovative on so many levels.

And Hillary's comment intrigues me. I love the idea that she has communicated with speakers of other languages through Esperanto. That's valuable info for travelers. Worth checking into.