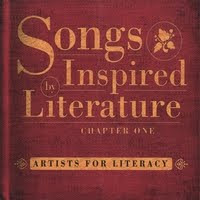 Here's what's on the first album:

I thought it was an interesting mix -- songs inspired by poems, plays, graphic novels, memoirs, and so on. The second and third cds are equally intriguing.

Here's a long list matching songs with literature. Pairing lit and music could be a good classroom project. You start thinking about the book that you're studying in a different way, making new connections.

Lastly, here are some poetry/song match-ups that I made a while back.

I think I have my next playlist!